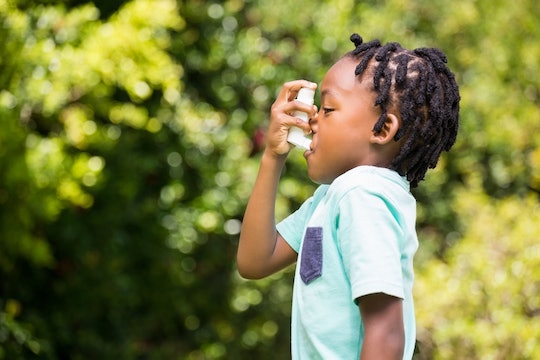 If Your Child Has Asthma, You Really Don't Want To Skip A Flu Shot, According To This New Study

I would venture to say, by now, most parents are aware that flu vaccines are recommended for most people, and definitely for most children. Because as anyone who has experienced it themselves — or via a house full of miserably sick kids — influenza is nothing to mess around with. So if something as simple as a shot can either prevent it altogether or greatly reduce the severity of the symptoms, it just makes sense to bite the bullet for that quick poke in the arm. As with anything, though, sometimes life gets in the way, and parents don't make it to the pediatrician's office for that annual shot. However, according to a new study, if your child has asthma, you really don't want to skip a flu shot.

Influenza kills; it's plain and simple. Tens of thousands of lives are claimed each year from the respiratory illness, as NPR reported. And according to the Centers for Disease Control & Prevention (CDC), there are certain groups of people who are at a higher risk than others. These individuals include adults 65 and older, children under age 5 (and especially under age 2), pregnant women, nursing home residents, and those with certain health conditions — like asthma, for example.

A new study published Monday to in the journal Pediatrics highlights just how dangerous skipping the flu shot can be for children with asthma. "We now know that if these kids get the flu, the risks are very high that emergency treatment for an asthma attack will fail," the study's co-author Dr. Francine Ducharme, in a news release from the University of Montreal. "Instead of having an 18 percent risk of treatment failure, with flu their risk rises to 40 percent."

Particularly, it's preschoolers with asthma who could wind up at the hospital if they come down with the flu. "These kids should get their flu shot and they should get it systematically — it's worth it," Ducharme said in the news release.

How did they come to this conclusion, you ask? Here's the lowdown: For the study, researchers looked at approximately 1,000 children who had been treated for moderate or severe asthma attacks in ERs at five Canadian hospitals, as USA Today reported. Nose swabs taken from these kids, which determined whether they had the flu, or another respiratory illness. Nearly two-thirds of the children tested positive for a viral infection. When given normal treatments for an asthma attack (think inhalers and oral corticosteroids), 19 percent overall didn't respond to the meds, according to the study's findings.

However, what researchers found was children with influenza or parainfluenza had a 37 percent higher chance of not responding to treatment, as UPI reported. Meanwhile, those without influenza only had a 13 percent chance of not responding. (That's kind of a big deal.) Similarly, children with respiratory syncytial virus (RSV) were more likely to experience asthma treatment failure, according to the study. Human rhinoviruses, on the other hand, did not reduce the treatment effectiveness.

The study's authors noted that making sure children with asthma get the flu shot every day is a simple way parents can help protect them against complications related to influenza. "Influenza is the only respiratory virus that is vaccine-preventable. Granted, it's at best only 50 percent efficacious, but that's no reason for kids with asthma not to get vaccinated yearly, in the fall, before flu season starts," one of the study's co-authors Caroline Quach said, according to USA Today.

For parents and loved ones of children with asthma, this study reiterates the importance of getting the flu shot every single year. Because as inconvenient (and briefly uncomfortable) as going in for an arm poke is, it's certainly better than the alternative.