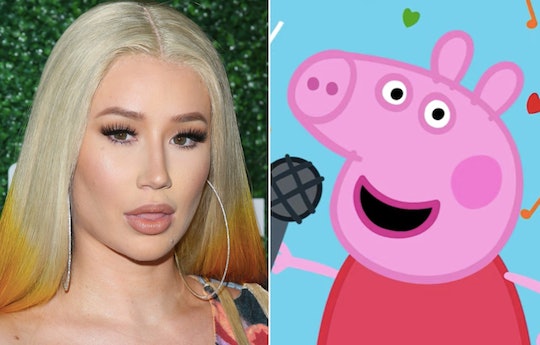 Celebrity feuds aren't uncommon; in fact, they're so normal in this day and age, it can be a little difficult to keep track of them all. Some rifts, though, are just too bizarre not to talk about. Like, I don't know, a cartoon pig and Australian rapper, for example. Indeed, over the weekend, it appears that Iggy Azalea had a little "feud" with Peppa Pig and, honestly, it might just be the funniest celeb squabble of all time. If you missed this while it unfolded, you may want to catch up now — trust me, you'll be happy you did.

Last week, the official Peppa Pig Twitter account announced that Peppa Pig My First Album would finally hit stores on Friday, July 19. The album features 16 tracks, including popular songs like "Bing Bong Zoo." Peppa's release date for her album followed the July 13 release of Azalea's latest album, In My Defense, according to USA Today, and the Australian rapper was clearly worried about Peppa stepping on her toes as she jokingly tweeted, "It's over for me now," about Peppa's first musical project.

Her surprising tweet prompted a response from the Peppa Pig Twitter account, which included a nod to one of Azalea's most popular songs. "Peppa's so fancy, you already know," the account replied, along with a GIF of Peppa Pig dancing in the mirror.

It didn't end there, though. Azalea — let's hope jokingly —  demanded in a tweet, "Collab with me now or you'll end up a breakfast special peppa." Naturally, Twitter went nuts over the comment.

"we want this collab so bad," a third person tweeted.

The shocking "feud" between Azalea and the beloved children's cartoon character made headlines for obvious reasons, but it looks like it ended as quickly as it began. On Saturday, the "Kream" rapper told E! News Peppa squashed the feud with silence, but Azalea maintained that she came out on top in the end. "She hasn't said anything to me since," Azalea told the outlet of her "beef" with Peppa. "But I'm beating her on the chart today, surprisingly... I really was scared though because Peppa Pig is so popular with kids. When I saw that Peppa Pig was releasing an album, I was like, 'Well, that's it. I'm out of the race. I'm beat, because I even started.'"

Azalea is right about one thing: Peppa Pig is seriously popular with kids. So popular, in fact, that toddlers — who aren't British, for the record — are picking up the English pig's accent.

As for Peppa's album, it seems like it's a hit with kids. As noted by HuffPost Canada, it already has five stars on iTunes and reviewers have called it the "album of the year" and praised it for being "better than any Drake album," which is high praise.

Celebrity feuds come and go, but not will ever be as bizarre as this one. I, for one, am glad Iggy Azalea and Peppa Pig settled their differences. There's room for two queens on the charts.