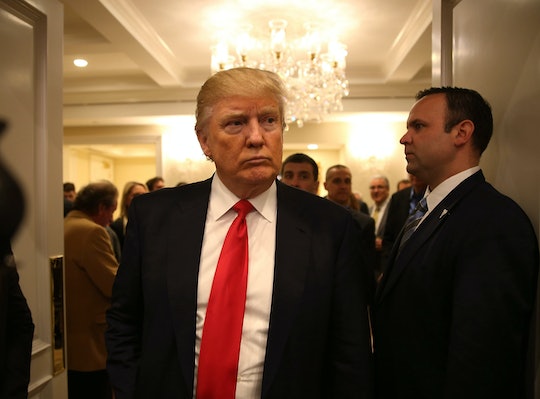 Violent incidents have been stacking up at Republican frontrunner Donald Trump's campaign rallies, with videos emerging online as early as October 2015 and increasing in frequency as the campaign has rolled on. What's even more shocking than these outbursts of violence is that — despite media and public shock — many of these incidents have largely been ignored. However, ignoring Trump's alleged campaign violence misrepresents American values, and it's a slippery slope down to more dangerous territory.

The incidents have become so widespread that Slate curated a running list of them. There was the rally where a black man was forcibly removed from the event as onlookers shouted the Nazi refrain "Sieg Heil," along with "Light the motherf*cker on fire." At another rally, a Secret Service agent slammed a photographer to the ground. On Thursday, a man who punched a black protestor being escorted out of a rally was not detained himself — although footage shows security wrestling the protestor down to the ground after he was sucker-punched. The attendee who punched him was later charged with assault, but Trump did not acknowledge the incident, according to CNN.

The videos are disturbing to watch, not only for their blatant violence, but for the way violent individuals are handled afterwards: in most cases, they're cheered on by others or walk away with no repercussions. Trump himself seems to encourage it — according to CNN and Mother Jones, he's been quoted at rallies as saying "In the good ol' days, they'd have ripped him out of that seat so fast," "I'd like to punch him in the face," and "knock the crap out of him, would, you? Seriously, OK, just knock the hell. I promise you I will pay for the legal fees, I promise, I promise."

When CNN's Jake Tapper asked him about the violence at his campaign rallies, Trump said:

People come with tremendous passion and love for the country, and when they see protest—in some cases—you know, you're mentioning one case, which I haven't seen, I heard about it, which I don't like. But when they see what's going on in this country, they have anger that's unbelievable. They have anger…They don't like seeing bad trade deals, they don't like seeing higher taxes… There's also great love for the country. It's a beautiful thing in many respects. But I certainly do not condone that at all.

Disguising violence and hatred as "a love for the country" is what happened in Germany after WWI and it's what led to the rise of Mussolini in Italy. Calling Trump a fascist might sound silly — c'mon, he's just a guy with a bad haircut who builds hotels — but the two are being linked together more and more often.

Whether he falls under that label or not doesn't matter, though. What does matter is that the violence at Trump's campaigns has largely gone unaddressed. While both former Secretary of State Hillary Clinton and Vermont Sen. Bernie Sanders have condemned the campaign violence, none of Trump's Republican opponents have spoken out about it, and that's worrisome and dangerous. Because, as activist Desmond Tutu once said, "If you are neutral in situations of injustice, you have chosen the side of the oppressor."

The outcry to these violent events should be loud, and it should be unanimous — because, Republican or Democrat, the violent response to dissent seen at Trump's rallies goes against core American values, which are centered on freedom of speech, the acceptance of individuals of all backgrounds, and equal opportunity. Ignoring Trump's campaign violence means turning one's back on the actual values that made the United States a symbol of opportunity and freedom, and it means condoning a much scarier ideology — one of oppression and violent silencing of those who have already been historically silenced.