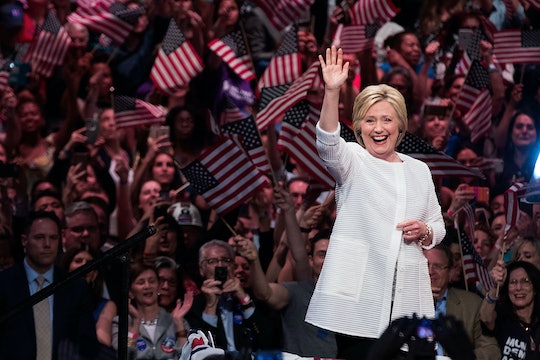 It's all but official now. Former Secretary of State Hillary Clinton is the presumptive Democratic nominee for President of the United States. This is a pretty big deal. Yes, even if you're not a Clinton supporter, and even if you're not a Democrat at all. Clinton is the first woman presidential nominee from a major party in the U.S., and we shouldn't ignore that. I'm not saying that anyone should vote for Clinton because she's a woman, but pretending that we're so enlightened that we don't see gender anymore certainly isn't the way to handle this historic nomination.

Having a woman candidate for president of the U.S. is a huge deal. Call your grandmother right now and ask her if she ever thought she'd see this day. While other countries have been electing women presidents and prime ministers for decades, the U.S. never has. Think about that: in more than 200 years, spanning more than 40 presidents, not only has the U.S. never elected a woman, it has never even strongly considered electing one until now. That's outrageous, and it shouldn't be swept under the rug. Half of this nation is made up of women, and yet we have never been represented in the White House.

Sure, it sounds very progressive to say that it doesn't matter whether the president is a man or a woman... Except that it kind of does matter. Look where 40-odd men have gotten us: reproductive rights are being stripped away from us bit by bit, maternity leave is a joke, and rape culture is reaching the point where I'm surprised any woman is brave enough to attend college anymore. Plenty of good men have stood by us and fought for us, but maybe it's time for them to step aside and let a woman have a crack at it. After all, everybody's heard of Susan B. Anthony and Elizabeth Cady Stanton, but nobody's heard of James Robert Mann, the congressman who finally got the ball rolling on the 19th amendment.

Regardless of how you feel about Clinton's politics or whether you think her email server was shady, she's done something no other woman in history has done, and that counts for something. Our daughters now have someone in politics to look up to besides Geraldine Ferraro and Leslie Knope. Even if Clinton doesn't end up being elected president (obligatory moving to Canada reference here), her candidacy has given hope to every girl and woman who has watched its progress. Let's step back for a moment and acknowledge, politics aside, that she did it. She finally did it. And that's pretty great.