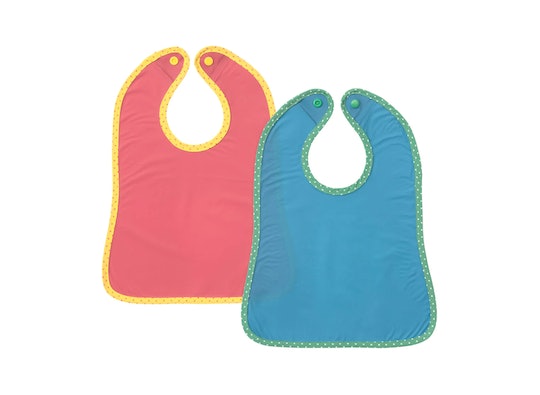 IKEA Is Recalling 7,000 Of These Infant Bibs Due To A Possible Choking Hazard

The possibility of a choking hazard has spurred IKEA to voluntarily recall thousands of infant bibs after receiving reports about a snap on the product detaching. According to the Scandinavian retail chain, the snap used to hold its red and blue MATVRÅ bibs closed has, in a few instances, detached from the bib itself. If the snap fell within a curious child's grasp it could easily be picked up and put into the mouth, posing a potential choking hazard.

"IKEA has received two worldwide reports of the snap on the bib detaching, which could result in a choking hazard," the company said in a press release announcing its recall of the MATVRÅ bib blue/red two pack. "Neither of these incidents resulted in injury or occurred in the U.S. For this reason, IKEA is voluntarily recalling the MATVRÅ bib 2pk in blue/ red."

Although neither the blue or red MATVRÅ bibs have yet to actually cause any injuries, IKEA has moved to voluntarily recall the two-pack in an effort to prevent any possible injuries or deaths from happening. And not without good reason.

The American Academy of Pediatrics has reported that choking is "a leading cause of injury and death among children, especially children 3 years of age or younger." And while it's common to associate choking with food, the American Academy of Pediatrics has noted that toys and coins join food to "account for most of the choking-related events in young children, who put objects in their mouths as they explore new environments."

Customers who have previously purchased the blue and red MATVRÅ two-pack are being urged by IKEA to discontinue its use and return it to any IKEA store for a full refund. Due to the recall, customers will not be asked or required to provide proof of purchase when returning their blue and red MATVRÅ bibs.

But not all of IKEA's MATVRÅ bibs are being recalled. The green and yellow MATVRÅ bibs that feature fruit and vegetable patterns, for example, are not included in the recall. According to IKEA, those bibs are made from a different material and construction and are thus safe to continue to use.

Instead, the recalled bibs have been described by the U.S. Consumer Product Safety Commission as having a snap at the back of the neck and being either blue with a green and white polka-dotted seam along the edge or red with a yellow and white polka-dotted seam. Both bibs have the IKEA logo along with the words MATVRÅ and IKEA printed on a white tag attached to the back of the bib. According to the CPSC, IKEA sold the red and blue two pack of MATVRÅ bibs for roughly $2 both in store and online from August through September of this year. The company has estimated that its recall of the MATVRÅ bib two-pack will affect roughly 7,000 units.

If you have any additional questions or concerns, IKEA is directing its customers to contact the company by phone, at 888-966-4532, anytime.