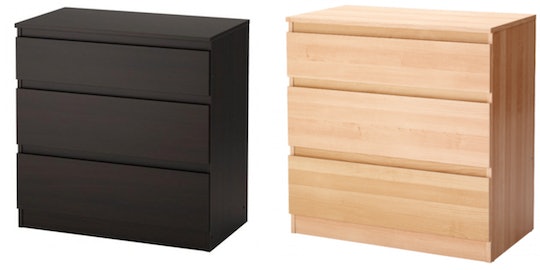 IKEA Is Recalling 820,000 More Dressers Due To Potential Tipping Hazard To Children

Parents with IKEA furniture at home, take note. On Wednesday, March 4, the U.S. Consumer Product Safety Commission (CPSC) announced that IKEA has recalled 820,000 dressers due to concerns that they can tip over and trap children.

The furniture company tells Romper it is recalling the KULLEN 3-drawer chests, which "have been on the market for more than 14 years, and more than 4 million pieces have been sold around the world." According to the CPSC, the dressers, which were sold in two colors at IKEA stores and online in the United States and Canada between April 2005 and December 2019, have been recalled because they can be "unstable if it is not anchored to the wall, posing tip-over and entrapment hazards that may result in death or serious injuries to children."

An IKEA spokesperson tells Romper in a statement that the company has "not identified any reports of serious injuries involving the KULLEN 3-drawer chest and it is safe to use if attached to the wall, per the assembly instructions and using the included wall-attachment kit."

To identify if you have a recalled KULLEN 3-drawer dresser in your home, locate the product label on the inside of the top or side frame of the unit. If you have one, the CPSC says to stop using it immediately if it's not "properly anchored to the wall" and then "place it into an area that children cannot access."

You can also request a free wall-anchoring kit, or contact IKEA to have someone install it for you.

If you have any further questions about the recall or what to do with your KULLEN dresser, you can email secureit@ikea.com or call (866) 856-4532.