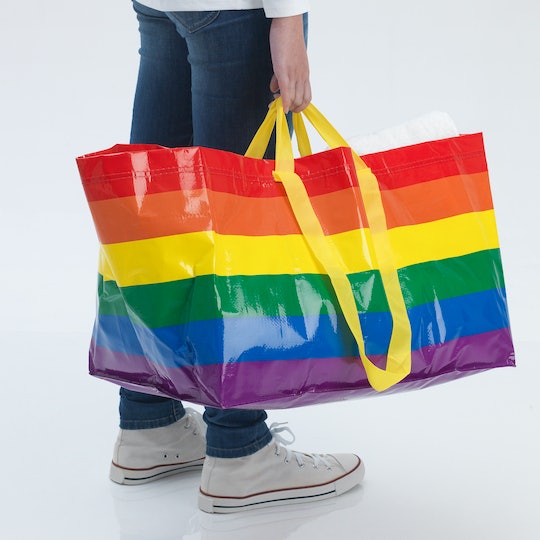 I should have known the European company that invented stylish storage solutions for a family — those "Kallax" storage benches with the boxes to hide toys have literally saved my sanity — would come up with something inclusive to benefit the cause of equality in the month of June. IKEA's rainbow bag in honor of pride month will put some color back into your spring cleaning routine.

As eco website Treehugger reported, the Swedish furniture chain has kicked off a new version of its roomy plastic shopper. One hundred percent of money made from the sale of the new, brightly-multihued bag will go to the Human Rights Campaign Foundation, to shore up the nonprofit's programs for children and families from the lesbian, gay, bisexual, transgender, and queer communities, the website added.

The sturdy new bags (assuming they are as strong as the regular ones) will be available in IKEA stores starting June 1 for $3.99, according to a press release from the company.

“We are excited to partner with the Human Rights Campaign Foundation for Pride Month,” said Rafael Fantauzzi, IKEA U.S. Diversity & Inclusion Manager, noted on the statement, as per the Seattle Times.

“At IKEA, our culture is centered on the value of togetherness. We believe equality is a fundamental human right and that all homes are created equal. We know everyone deserves a home you absolutely love and a workplace where you can be yourself. To further show our commitment to equality and LGBT+ inclusion, on June 1, our co-workers will hoist the Pride Rainbow flag at all IKEA locations.”

As House Beautiful added, the design-for-the-masses chain has a history of allying itself with human rights issues, including housing for refugees. Meanwhile, Out magazine reminded readers that Ikea has used gay couples in ads since all the way in 1994. Not to mention the show RuPaul’s Drag Race, including a segment about headpieces made from Ikea lamp shades, the magazine noted.

And, in typical IKEA fashion, the new bag has a name, of course: Meet "Kvanting," as Treehugger clarified. (I always refer to my IKEA items by name, as in, "Go to Kallax and get your toy train." So I get this.) Kvanting will only be available, however, until supplies run out, so if you like this idea, head over to your local IKEA store as soon as the month turns.

While Out referenced the bag as a laundry toting device, I always find IKEA bags serve me best at the supermarket, or for school runs when the teacher needs something random, like 30 croissants on 10 hours notice for a project about world cuisine. So I always have at least one in my minivan, and at least now it won't be just a blue monotone one anymore.

While Treehugger noted the bag's plastic origins, I say this is the one time to just reuse and recycle it without thinking too much about your footprint. The bag will last forever, it makes an important statement that you believe all people should be treated equally, and you can do it in style. Plus, doesn't rainbow match with everything?