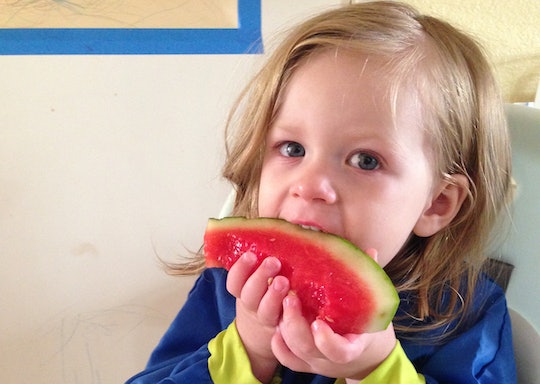 Forcing My Baby To Eat New Foods Was A Mistake

The moment my kid graduated from breast milk to food, I was envious of other parents whose babies were actually receptive to food. My baby didn’t seem to like anything except sweet potatoes and peaches, and as she grew older, the problem persisted. She became super picky about what she would and wouldn’t eat, and the dinnertime struggle began to wear on me. She would only eat ramen or plain buttered spaghetti, and I couldn't serve those things every night. So I started to try forcing her to eat new foods, even if I knew she wouldn’t eat them, in a vain attempt to add some variety into her diet. To be honest, it was a huge mistake, and I wish I had never done it.

It didn’t begin as forcing new foods on her. It started as a strong desire to make family dinners instead of different meals for each of my kids and yet another meal for my husband and I. Making a simple family-friendly dish didn’t seem like it should be such a difficult thing — and for my boys, it wasn’t. My daughter, however, would sit at the table eschewing every last thing on the table, or eating only one small side dish like a few spoonfuls of canned corn or a single croissant. She'd whine for snacks. She'd beg to get up from the table as soon as we sat down. She'd have epic meltdowns when, after dinner, everyone except her would be allowed to have dessert.

I tried to cajole her into tasting different foods on her plate. “You have to at least try it,” I would tell her. At a certain point, however, the bribing became ridiculous. I would cut off a piece of chicken smaller than a pea, and still she would refuse to put it in her mouth. I would implore her to eat just one spoonful of mashed potatoes, and she would act as if I was telling her to eat a live beetle. Instead of becoming more open to new foods, she became increasingly shut down and anxious about dinnertime.

I longed to be one of those mothers who cooked alongside her kids and brought the whole family together around the dining room table. But no matter how much I let my daughter help in the cooking and planning of meals, sitting down to eat was always a struggle.

Hours before I would even start cooking, she'd start begin requesting one of the few things she liked to eat, like macaroni and cheese or oatmeal. If I told her I had something different planned for our family meal, she would spend the entire afternoon wailing and screaming that she didn’t like that kind of food, even though he had never tried it. The thought that it might have to touch her mouth was enough to send her into an absolute frenzy of anxiety and disgust. If she wasn’t going to enjoy dinnertime, neither was anyone else.

At the time, we all ate separately, because everyone wanted something different for dinner. I had wanted to have family dinners not only for the ease, but for the bonding experience as well. I longed to be one of those mothers who cooked alongside her kids and brought the whole family together around the dining room table. But no matter how much I let my daughter help in the cooking and planning of meals, sitting down to eat was always a struggle.

Food had become a constant source of anxiety, even though all I had wanted was to bring us closer and help my daughter eat better.

She liked to cook, and she liked for us to spend time together. But she didn’t like being forced to eat what she had helped prepare. The constant bargaining that took place while trying to get her to eat food she didn’t want was exhausting. My husband and I would get angry at her ridiculous theatrics, and she would get angry because she felt like she had no control over what she ate. There were always tears — mostly hers, but sometimes mine. It was always a losing battle, and I hated myself whenever I decided to dig my heels in. I’d threaten no ice cream unless she tried a single tiny bite and the follow-through would be misery.

After a while, I realized the struggle wasn’t worth it. When I talked to her doctor about her eating habits, he wasn't concerned. She was still growing, still healthy, and she would eventually reach a breaking point with her pickiness, he assured me (though I had my doubts about the latter). Forcing her to try new foods wasn’t giving her a better diet or giving us a better family dynamic. In fact, it seemed to make both worse. She was more averse to trying new foods than ever before, and everyone dreaded dinner like the plague. Food had become a constant source of anxiety, even though all I had wanted was to bring us closer and help her eat better.

Now, we still sit down together for family dinners, but she usually opts for a bowl of oatmeal. It’s a happy event, and she often asks me to sit next to her at the table. There is still other food there, waiting on the sidelines in case she wants it, but there is no more worry that it will be forced upon her with an ultimatum. She still isn’t trying new foods, but maybe someday, with enough time and distance, she’ll come to it all on her own. I will never try to force her to try anything new again, and simply hope that offering food without pressure will someday lead to a breakthrough.