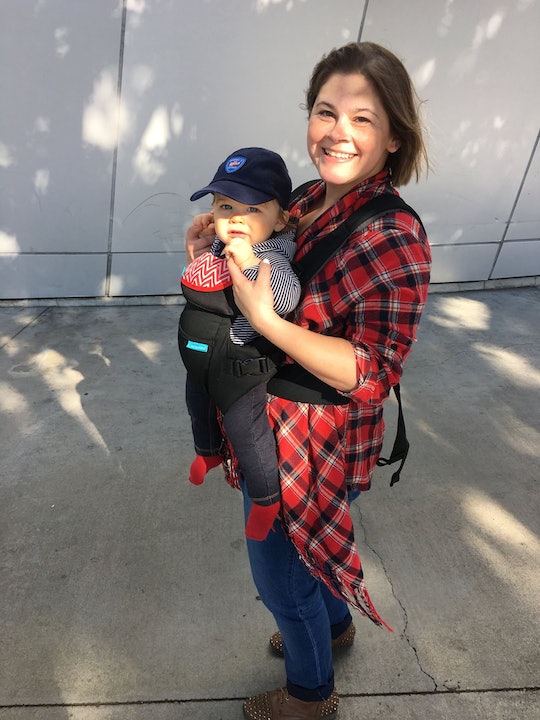 In theory, babywearing is undoubtedly a genius idea. It's a good way to keep your infant calm and cuddled close to you, while maintaining full use of your hands. There are also myriad choices available on the market for babywearing options, including baby carriers and slings. Soft cloth, hard cloth, those featuring buckles, buttons, Velcro – they're all available if you know how to look for them.

As someone who prioritizes my bodily autonomy, I should've considered babywearing sheer bliss. But it wasn’t. In fact, I kinda hated babywearing, and when I did it while my son was young, it was always as a last resort.

I wanted to love babywearing. I really did. But there are so many things I disliked about it. The thing I disliked the most was actually strapping on the baby carrier. I had two carriers: an all-cloth one that wrapped around your body and was supposed to conform itself to your desired "hold," and a more structured one with buckles that you put over your head and clasped together on both sides of your body and around your hips. Both were marketed as “super easy” to assemble and wear, but I found them annoying and impossible to put on.

I am not a patient person. If I were to participate in that famous marshmallow test of self-control, in which the researcher told kids to hold off on eating a marshmallow in order to gain another one, I would definitely be excused from the study for immediately swallowing the marshmallow whole. So when I needed to pick my baby up, do you think I wanted to stand up and buckle and unbuckle an apparatus to allow me to pick said baby up? Hell, no! I just wanted to pick my baby up, full stop. I did not want to solve a geometry equation featuring ten feet of fabric or six plastic buckles in places I did not understand.

The frustration was not worth it.

Putting a baby carrier together was always a long, drawn-out process. I'd grab a carrier and mess with it for a few minutes, while my child’s scream rose a few octaves. Then I'd continue messing with it while I started sweating and cussing under my breath. Then I'd grab the carrier and bunch it up in my arms, huffing and puffing all the while. After a few minutes, I'd slam the pile onto the floor and walk over to my now-wailing child, while tears of frustration ran down my face.

Beyond that, if I did manage to get the baby in the carrier, I struggled over which direction to face him. If I let our child face forward,which was by far his favorite position, then I couldn’t see his facial reactions and check in with him. If I had him face my chest, he would be pissy. I felt like I just couldn’t win.

At some point, I couldn’t bear to even try using a baby carrier anymore. The frustration was not worth it. So here’s what I did when I needed to pick up my baby: I walked over to him and slung him into my arms and then draped him over my shoulder. 1, 2, 3, done.

He was a part of me, just as he'd been when he was in my womb, and we were going through life's adventures hitched to each other.

That said, there were a few times when the carriers came in handy. Once, I took Ollie on a swamp walk, and I really needed my hands free so I could kill bugs. Then we took a vacation that required a lot of walking. During these times, I actually enjoyed babywearing. It felt like Ollie and I were a team. He was a part of me, just as he'd been when he was in my womb, and we were going through life's adventures hitched to each other. And now that he's old enough that he doesn't need me to wear him, we're still going through life's adventures hitched together — only this time, he's at my side.