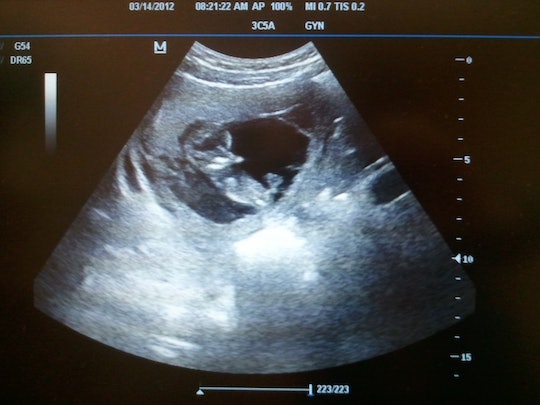 When I went to my OB appointment to get my 20-week ultrasound, Amanda Palmer’s song “Trout Heart Replica” had just come out. It’s an epic seven-minute piano-and-strings heartbreaker of a song about how she went with some friends to a fish market, and the butcher cut the heart out of the trout in front of them and held it up, still beating, and beating, and beating. “The kids love this,” he'd said. I’d absorbed some of the lyrics without ascribing any of my own meaning to them: “And it’s beating, and it’s beating, and I don’t wanna know…”

Your 20-week ultrasound is the anatomy scan and I'd missed my first appointment, so making this one up was important. As the ultrasound technician rubbed the thingie on my tummy with the goo, I watched on a big-screen TV as she pointed out body parts: “That’s a forearm. That’s the top of his head.” And this is when we determined, for sure, that it was his head. She showed me an inkblot splotch that was allegedly my fetus's penis, but to me it looked like a butterfly. I don’t know what that says about me.

I was alone at the anatomy scan. I didn’t have to be; my friends were pretty great about making sure I never had to go to an appointment by myself unless I wanted to. But for whatever reason, I’d decided to take this one alone, and that was fine.

My usual gyno, Beth, knew that I was placing my child for adoption, but this ultrasound tech did not. And I was pretty quiet during the scan. I didn’t have a partner to squeal with, and at that point in time, I was pretty calm about the idea of a small human incubating in my body. I just watched in silence, and I think the technician was thrown off. She kept saying, “Are you OK?” and I was fine, I just didn’t have anything to say. Sweet, that’s a femur. Good job.

And then I saw the heartbeat.

I said, “Is that the heart?” My voice was lower; I couldn’t keep the awe out of it.

She said, “Yep.” It’s the one time I asked her a question. (Did I detect some relief in her voice that I had expressed some emotion about the miracle of life, or was I projecting?) She confirmed at the end of the scan that everything looked fine, and left me with printouts of three pictures: his profile, his feet, and his little Rorschach test butterfly dick.

It didn’t matter that my boss had reminded me that morning how much work I’d been missing lately. My baby had a sex — and he had a heart.

Outside the hospital, I sat on a bench in the little garden with my headphones on, staring at my printouts and playing Amanda Palmer’s “Trout Heart Replica” on repeat. "And it's beating, look it's still beating..."

I stayed there until standing and walking to the subway seemed like a feasible task. It didn’t matter that I was going to be late getting back to work. It didn’t matter that my boss had reminded me that morning how much work I’d been missing lately. My baby had a sex — and he had a heart. He was real. And yes, even though I was planning to place him for adoption, he was, and is, my baby.

A month later, I would meet my son’s adoptive parents – the couple of my dreams. Four months later, I would meet my son, and fall immediately and hopelessly and permanently in love. Five months later, I would sign all the paperwork necessary to relinquish him, and his parents and I would embark on figuring out our new, weird little family. Then a naming ceremony that my parents would fly from California to attend. Sitting with his dads while our son blew out the candle at his first birthday party. Thanksgiving dinners, Mother’s Day picnics, the crawling, and then the walking, and then the talking.

But that afternoon, sitting outside a hospital in Hell’s Kitchen with my printouts and my headphones, there was just a song and a heartbeat.

*This story was adapted from the solo show I've done about my pregnancy and adoption experience, Baby Mama.

More Like This
30 Marvelous Baby Boy Names That Start With “M”
53 Rainbow Baby Names Filled With Hope
How Hot Is Too Hot For Babies? Experts Weigh In
23 Sweet Quotes To Dedicate To Your Rainbow Baby