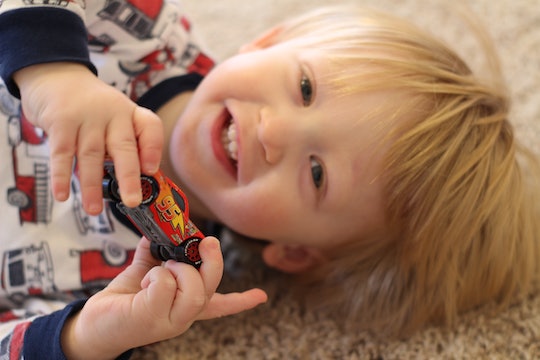 After suffering two miscarriages while trying to have a third child, I had to pause and consider what it meant to move forward and try again. My midwife had mentioned that if I were to lose another child, I might need to see a fertility specialist. A pregnancy loss was no longer a scary thing that only happened to other people. It had happened to me twice in one year. It almost seemed impossible that it wouldn’t happen again.

Yet ultimately, my husband and I decided to give it one last try, because as I explained to him, the love I felt for our children made every bit of heartbreak worth it. In the end, I was right: the love I received back made the struggle worth it and then some. I will never forget the first time my rainbow baby said, “I love you.”

When we tried again, I got pregnant easily. Yet the victory felt somewhat hollow. I didn’t gasp in delight or cry tears of sorrow or joy as I held up the pregnancy test. I showed my husband, gave a weak smile, and prayed aloud, “I hope this works.” I didn’t want to get too attached to the idea of another baby. I knew now exactly how fast that dream could be snatched from me.

As I moved through those first early weeks of pregnancy, I tried not to think about being pregnant. I tried not to imagine myself being a mother again. I tried not to imagine myself crying on the bathroom floor and bleeding again either. I tried to stay focused on the minutia of my day, thinking about what I was going to eat (and trying not to think about whether my nausea was strong or weak and what that might mean), who I was going to meet up with (and what I should talk about since I wanted to hide my pregnancy), what I was going to wear (was I showing too much? Too little? Was I even pregnant still?). No matter what I tried to keep my mind occupied, it was consumed with what might be happening in my womb.

I was overcome with love in a way I had never felt before. Here was my missing puzzle piece. Here was the baby I had struggled so long for. He was everything. I loved him more than life itself.

The one byproduct of all that worrying, however, was that I didn’t bond with the baby in the same immediate way I had with all my other pregnancies. In my mind, I would constantly whisper “I love you’s” to my unborn children, even the ones I had lost. This one was different. I was so ruled by fear that I didn’t want to feel any attachment, in case it ended in predictable disaster. When I began bleeding just before my eight-week appointment, I handled it with a numbness that astounded me. I called my husband into the kitchen, told him which step of the recipe I was on while making dinner so he could take over, then told him I was having another miscarriage. I calmly instructed him to get maxi pads after dinner. I cried without without hardly making a sound.

Yet when he returned from the store, the heavy bleeding had stopped. I called my midwife who scheduled an appointment for me to come in the next morning. I hadn’t miscarried. My baby was still alive. I felt overjoyed but also guilty at my unemotional reaction to what I thought was a third miscarriage. As the pregnancy continued, I allowed myself to fall in love with my rainbow baby. By the time he was born, I was overcome with love in a way I had never felt before. Here was my missing puzzle piece. Here was the baby I had struggled so long for. He was everything. I loved him more than life itself.

I adored him with a fervor that was unmatched with my previous two babies. Perhaps all the tragedy had finally shown me how deeply I should enjoy his infancy and savor these last “firsts” with my final rainbow baby. I relished his first smiles, first coos, first scoots and steps. Yet there was one milestone that was noticeably absent - his first “I love you.”

By the time he was two he was saying up to 7-word sentences, and three-syllable words like “octopus.” Yet he still wasn’t saying, “I love you.”

I realized around 18 months that he was developing an alarmingly sophisticated vocabulary. He was above and beyond his peers, stringing together words like it was nobody’s business. By the time he was two he was saying up to 7-word sentences, and three-syllable words like “octopus.” Yet he still wasn’t saying, “I love you.”

People were astounded when they met him. He would chat with them, while friends and family would stare at him, amazed by how much they were able to understand. “I’ve never seen a 2-year-old who can talk like that,” they’d say. I’d say it all the time too. He had a bewildering way with words. Yet for all his advanced communication skills, parroting anything and everything I said to him, he still would reciprocate, “I love you.”

“I miss you,” he’d say as he snuggled into me. It was his alternative to saying “I love you.” It was adorable, and made me fall all over myself the first few times he did it. Yet over time, it became a source of anguish. He could say “I love you.” He could say “Look at my Lightning McQueen car, Mom” so obviously an “I love you” wasn’t stretching his skills at all.

I began asking him to say it for me all the time, and he would laugh or say “I miss you” instead. I wondered if perhaps he felt some barrier to loving me; maybe it was because I could love him from that first moment I knew he existed. “Just say ‘I love you,’” I’d implore. “I know you can do it.” He knew he could, too. He just didn’t want to.

Then shortly after his second birthday, as I was milling about in the kitchen, I found myself distractedly saying, “I love you too, baby.” Then I realized where the “I love you” had originated. My rainbow baby, sitting at the table, coloring contently, had just said, “I love you” as if he had said it a million times before.

He smiled and giggled and said, “I miss you! I miss you!” trying to cover up his mistake. Then later that day, he said it again. A few days later, he said it to my husband. The game was over. He loved us. At last. I had waited so long to have him to love, and so much longer for him to love me back. It felt like redemption for all the heartache of my miscarriages - wrapped neatly into three unmistakeable words.

More Like This
22 Instagram Captions For Pics Of Your Baby Trying Solid Food For The First Time
Here’s What You Need To Know About That Viral 1960s Baby Formula “Recipe”
First Look: The New Jujube x Lilo & Stich Collaboration
The Best Toys For 6-Month-Olds Will Do More Than Just Keep Them Occupied