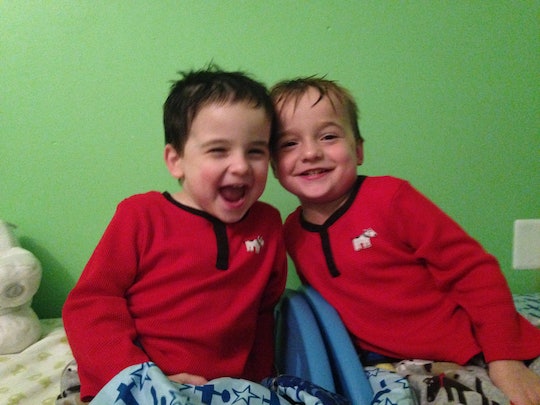 Why I Don't Let My Sons Play Rough

The other day, I was dealing with the usual post-preschool chaos - unpacking half-eaten lunches, hanging up backpacks and going through folders for notices about yet another fundraiser — when one of my four-year-olds started play-fighting with his twin brother. This has been one of their favorite games recently. What starts out as a playful hug devolves into both of them rolling around on the floor.

As I always do when they start to wrestle like this, I busted out my Mean Mommy® voice and told them to cut it out. I don't tolerate rough-housing in my house, and they know that. Usually, my voice dropping two octaves is enough to get my kids to separate immediately and move on to other activities, but this time Lolo stayed perched on top of his brother's neck, which was starting to turn just a tiny bit blue. "It's OK, Mommy," he told me with a grin. "Our teacher said we can wrestle at home."

I managed to keep my cool in front of my kids, but instead I was seething. Everyone seems to think it's fine to encourage my sons to play rough with each other. They seem to think it's innocuous behavior, because "boys will be boys." But I refuse to believe that we need to let "boys be boys," or that playing rough is an unavoidable part of raising sons. For me, letting my boys wrestle with each other only reinforces toxic masculinity, and I want no part of it.

Whenever I call out anyone who tries to encourage the boys to rough-house, the excuse they always give me is that boys are wired to play rough, and that they're inherently more aggressive than girls. But science doesn't back up this claim. According to a 2014 study, men aren't "hardwired" to be violent (though they might be slightly more prone to acting violent than women, due to structural differences in the brain). And according to multiple studies, women are just as prone to anger and aggression as men are — it's just the gender norms we force upon our children as a society that shapes their temperament and brain development. It's the constant message that girls are supposed to play house and be polite, while boys are supposed to be noisy and dirty. Telling our boys they're supposed to play rough is precisely why it's bound to happen, not because there's something in their DNA.

Boys don't need to play rough with each other in order to understand their gender identity. "Boys will be boys" is merely an excuse for bad behavior.

Boys don't need to play rough with each other in order to understand their gender identity. "Boys will be boys" is merely an excuse for bad behavior that we've allowed to linger throughout generations. Anyone who tells me they roughhoused with their brothers growing up and turned out fine is missing the point. Think about men who don't have siblings, or men who were raised in a house full of sisters. They (likely) didn't have anyone to take this so-called inherent aggression out on, yet they still manage to make it to adulthood with their male identity intact.

My kids may get physical sometimes when they're left to play alone together. One of the boys will have a toy his brother wants, or Remy will want Lolo to sit on a certain spot on the couch, and Lolo will refuse. But that's not aggression — it's frustration. At 4 years old, they lack the vocabulary and emotional maturity to settle their disagreements through talking, and that can lead to them trying to settle it Fight Club style. I don't want them to grow up to have fist fights in parking lots because they don't know how else to handle confrontation. The best thing I can do for them is to help them verbalize their frustrations instead of placing bets as to which twin has the stronger headlock.

My uncle once told me that my sons will be "sissies" if I don't let them wrestle with each other on the floor. I know he meant it as an insult, but I sort of took it as a compliment. I think it's a good thing for boys to be in touch with their emotions, to know how to use their words instead of their fists. It's not that I'm afraid of my boys using their physical strength, it's just that I don't see roughhousing as an appropriate use of that energy.

Teaching my sons that playing rough isn't OK is a lesson in both self-control and consent. They need to learn that no means no.

I also want my boys to have a rock solid understanding of consent, and I strongly feel that discouraging them from wrestling with each other will foster a better awareness of this. I understand sometimes they both enjoy roughhousing with each other, but many times it's hard to tell if they're both having fun. There are times when the situation will start out playful, but one boy will have enough and want to stop, and his brother will keep going because he doesn't think his brother is serious. This is literally the excuse I've seen rapists give as to why they assaulted their victims. I want better than that for my sons, and for the women they may encounter in their lives. Teaching my sons that playing rough isn't OK is a lesson in both self-control and consent. They need to learn that no means no.

My sons attend a preschool where they happen to be the only boys in their class, and I love the fact that they get exposed to a lot of play that's viewed as stereotypically girly and to them it's just playing, full stop. They come home with stories of playing house at school, and they tell me they want to help bake cupcakes or climb a tree like their peers do. I like that they see the girls in the class as friends and equals, and I want it to stay that way. But when their own teacher tells them it's OK to wrestle at home, she's telling them that boys and girls play differently, and that these are things only boys can do. Both the feminist and pacifist in me has a huge problem with this.

Roughhousing isn't a rite of passage for young boys. It's a way of condoning sexist behavior. My boys aren't losing out on their masculinity or becoming "sissies" by not wrestling with each other. Instead, they're learning what it means to be well-adjusted boys, who will hopefully grow up to be well-adjusted men.