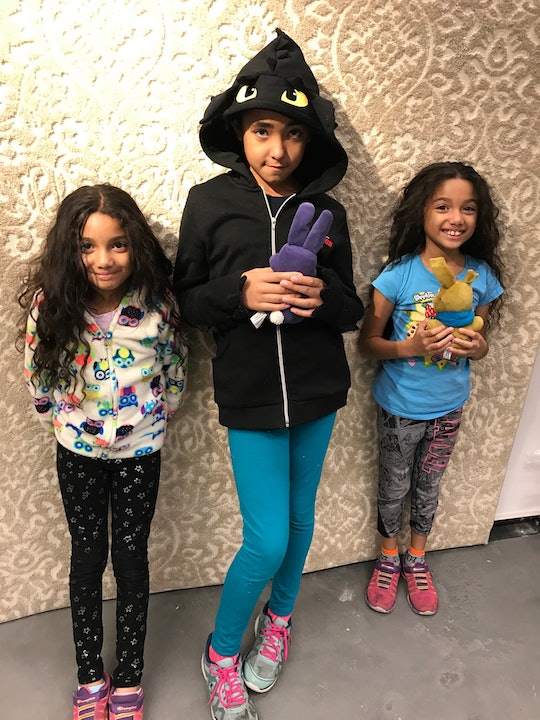 I'll Never Make My Kids Say The Pledge Of Allegiance

My three daughters are 10 and 8. They go to a public school right outside of Los Angeles. Every school day, after filing into the classroom and putting away their jackets, backpacks and lunches, they are expected to stand by their desks, put their right hands over their heart, and recite the Pledge of Allegiance, all together as a class.

Recently, however, I told my kids they can stop saying the Pledge of Allegiance. They can stand with the rest of the class if they want, but they don't have to recite the pledge or salute the flag. When they asked why, I explained to them what's been going on in the news lately. I told them about Ferguson, about Philando Castile and Sandra Bland.

I explained to my kids that when young black men lose their lives as the result of a police shooting, the police aren't always held accountable for their actions. My family is half-black and half-Latino, and I said I didn't feel comfortable pledging allegiance to a country that regularly disregards the lives of people of color like us, and my kids seemed to understand my position.

Don't get me wrong — if my kids wanted to say the pledge, I wouldn't' have a problem with it. I don't try to control my kids, and I want them to think for themselves. I would rather give them information and tell them my stance on an issue, and then let them decide what to do from there. I also know that sometimes kids want to do what other kids are doing, and they might want to say the Pledge just so they won't be ostracized by the other students.

How can I teach my children to respect the flag of a country where our lives don't matter?

But at the same time, I don't want them to take their lives for granted. I want them to know how many people of color have had to struggle in this country. And as things are seemingly getting worse again for people of color in the United States, I want my children to know the truth about this country: that it is not always kind to people like them.

Racism certainly isn't a new concept to them. My children know how our ancestors were slaves, and recently I explained to them how black people couldn't sit at the front of a public bus, use the same washroom or the same water fountains not so long ago in America. I told them that while we've made great strides towards equality, thanks to important figures like Dr. Martin Luther King Jr, unfortunately we still have a long way to go.

I love America, and I am happy we get to live in this country, but I was not raised to be patriotic. People in my family have served in the military (my uncles and my grandfather all fought in wars), and I have tremendous respect for veterans. But it's hard to teach my children to be blindly patriotic in light of how much we have had to question our own safety in this country lately.

In Trump's America especially, telling my children not to say the pledge is my form of resistance.

Now that Donald Trump is President and executive orders like the travel ban are now officially in effect, things are much harder for people of color in the United States. On top of that, police officers still continue to shoot innocent black men. As recently as last week, a police officer was acquitted for shooting and killing Philando Castile. How can I teach my children to respect the flag of a country where our lives don't matter? Where I'm constantly afraid of being stopped by a police officer for no good reason?

When Colin Kaepernick decided to "take a knee" during the national anthem last year, it made headlines. He got a lot of backlash from people who thought it was disrespectful for him not to stand and put his hand over his heart, just like the rest of the team. But I thought his actions were brave, and after Kaepernick took a stand against racism in the United States, I decided to take a stand, too. I told my daughters they no longer had to salute a flag for a country that does not look at us as equals.

My daughters seem to understand my reasoning. They tell me that at school, they don't say the words and they don't put their hands over their hearts, but they still stand with the other kids. So far, no one has said anything to us, and none of my kids have gotten in any trouble, though they do say they've gotten some weird looks from other kids.

Recently, however, my daughters switched schools. I must admit that I'm a little concerned how the new administration will react. If there is a problem, I will let their teacher know that it is my personal belief that kids shouldn't have to say the pledge. I will let the teacher know that it is truly hard to have feelings of love and appreciation for your country when you think your life doesn't matter, and can be taken away in an instant. And in Trump's America especially, taking a stand by telling my children not to say the pledge is my form of resistance.