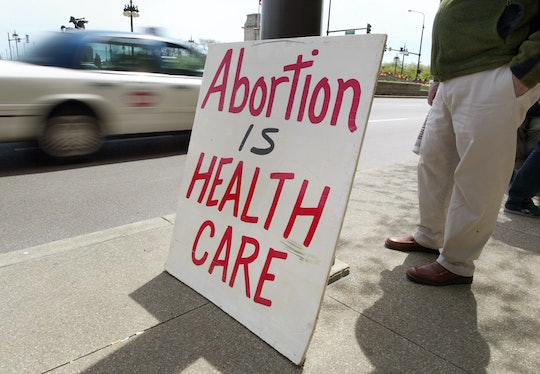 In an injunction ruling on Tuesday, a state judge said Illinois' medical providers refusing abortion don't have to provide referrals to doctors who do carry out the procedure. The lawsuit was brought forward by medical providers who refused to perform abortions, and Judge Eugene Doherty said Tuesday that they "raised a fair question as to whether their right to be free from government compelled speech is violated," according to the Associated Press. However, that means women who seek abortions from doctors who oppose it could be left without medical referrals in Illinois.

In July, a state law was amended, requiring that doctors who oppose abortion give information or referrals to any patients seeking the procedure. Any doctors who refused to give information to patients who asked for it could be subject to a $10,000 fine or risk losing their medical license. The new, amended law would go into effect on Jan. 1, and help ensure that patients aren't affected by their medical providers' religious beliefs.

Now, however, Doherty's ruling will stand until either a new court order comes forward or the case is decided, meaning doctors can legally withhold medical information and referrals from women simply because they morally disagree with abortion. The attorney representing the medical providers who filed the lawsuit, Matt Bowman, said Doherty's decision was a "victory for free speech and the freedom of conscience."

However, whether doctors' right to free speech should trump patient rights remains a contentious subject.

According to the U.S. Department of Health and Human Services, patients have the right to informed consent. "This means that if you need a treatment, your health care provider must give you the information you need to make a decision," the Department of Health and Human Services website reads. And according to a report in the journal Woman - Psychosomatic Gynaecology and Obstetrics, most western countries allow health care providers to opt out of non-emergency care, but only if those providers swiftly refer patients to someone who can assist them.

When doctors withhold information or referrals, they're violating patients' right to informed consent and failing to uphold essential standards of care, according to the non-profit group NARAL Pro-Choice America. Refusal laws also disproportionately affect low-income women, who often face geographical and financial barriers when attempting to receive medical treatment and advice. When women are refused access to a basic, legal procedure (i.e., an abortion) and are not given the information or referrals they need in order to proceed with one, their rights and health are both jeopardized.

As Robert Post, professor of law and dean at Yale Law School, wrote in an op-ed for The New York Times in 2014:

It is misleading to imagine that the doctor is asserting her personal First Amendment rights to speak as she wishes. It is more accurate to imagine that she is a constitutional spokeswoman for the rights of her patients to be informed.

Doherty's ruling will likely spark a large number of responses from both citizens and activist groups in Illinois, and Doherty did say he expected that the case would be appealed regardless of his decision. However, it now seems unlikely that the original state law amendment will go into action by Jan 1 as planned.