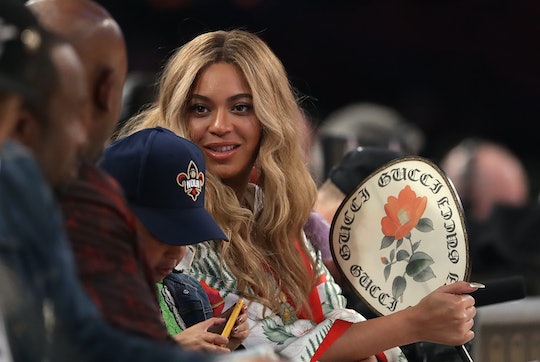 Rumi and Sir Carter, third and fourth in line for the U.S. throne, respectively, are now 1 month old, and the Illuminati theories about Beyoncé's twins' birthday are still going strong, because some people don't have hobbies, I guess. But a new photo posted to Instagram early Friday allegedly holds some spooky clues. Beyoncé posed in a long, blue veil, which trailed all the way to the ground, forming — you guessed it — a triangle. The the color choice was evocative of the Virgin Mary, who of course gave birth to one-third of the Holy Trinity, so that's basically a two-for-one triangle sale, and that's just on her head.

Her underwear, while partially obscured, presumably formed an inverted blue triangle, echoing the veil. Standing in front of a flowered archway, the singer held her sleeping infants while draped in what appears to be leftover upholstery fabric from the set of The Golden Girls, which as we all know was set in Miami, one of the three points of the Bermuda Triangle. This really could be more obvious without her literally tattooing, "We're Illuminati, ya'll" on her forehead. But for those who are still skeptical, there's plenty more to unpack.

Beyoncé's caption confirmed that the twins were born on June 14, the same day as noted world leader and Illuminati member President Donald Trump. That now makes three powerful people born on the same day. And obviously everyone's worked out by now that June 14 is the 165th day of the year, and 1 + 6 + 5 = 12, and 1 + 2 = 3. Also, Beyoncé now has three children, and there are three people posing in the picture. It always comes back to that number, which is of course the Illuminati symbol for royalty.

Even the baby on the left (sorry I can't tell you apart yet, Highnesses) is getting in on the action; one arm is pointing up, while the other points down. This is a clear homage to Baphomet, whose arms make the Sign of Hermetism, representing the phrase, "As above, so below," the very meaning of which is the key to enlightenment. But the most telling symbol is hiding in plain sight in the background. Although out of focus, it appears as though the Carters are posed on the edge of a cliff that drops off into the ocean. This symbolizes man's blindness to the fact that they are all that stands between us and the end of the world. So maybe try and show some gratitude, people.