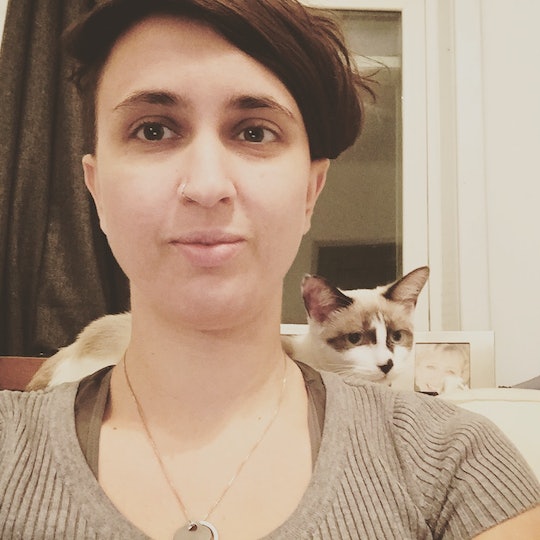 I'm A Birth Mother. Please Stop Asking Me If I'm A Surrogate.

When I tell people that I placed my son in an open adoption with a gay couple, by far the number one question I get asked is, “Cool! So, you were a surrogate?”

It’s not a question that would bother me if I only got it once or twice, but after getting it over and over and over, it gets old. There's a huge difference between being a birth mother and a gestational surrogate, and I want to clarify the distinction once and for all.

I am a birth mother, which means I conceived a child and placed it with another family. A gestational surrogate is someone who has an embryo with someone else's DNA in her uterus and carries the child to term. The title character of Juno, for example, is a birth mother and not a surrogate, even though she decides early on who her child's adoptive family will be. Phoebe from Friends, on the other hand, is a surrogate, and not a birth mother: she agrees to an IVF procedure in order to carry the children of her brother and his wife.

In both cases, a woman is pregnant with a baby that will eventually be living with someone else. But to me, here’s the important difference: a surrogate’s pregnancy is very much planned, and she gets paid for it — usually around $40-50K, according to the surrogacy agency Conceiveabilities. A birth mother’s pregnancy, on the other hand, is usually accidental, and while the adoptive family might cover some of her expenses (in my case, the adoption agency covered my transportation and medical costs), she is not being paid to be a birth mother.

That difference might not seem that important, and maybe it wouldn’t be so important to me if I didn’t get this question all the time. Surrogates are amazing, and there's nothing remotely shameful about being mistaken for one. But since I chose adoption in large part because I was more broke than I’d ever been in my life, and because my pregnancy was not something that I had planned, the question stings. It reminds me of why I made the painful decision to give up my child in the first place. And it makes me think that the person calling me a surrogate is not listening to me when I tell my story.

As a result, whenever I “out” myself as a birth mother, I share the specific details of my story, to make it as clear as humanly possible that I was never a surrogate. “Yeah, I got unexpectedly pregnant and decided to give it to a gay couple," I usually tell people. The phrase "decided to give it up" is key here: if I were a surrogate, my giving my child to another family would be a foregone conclusion since before I got pregnant.

I also try to explain to people that my adoption is open, which means that there is regular contact between me, the birth mother, and the adoptive family. (This is not unusual: 36% of adopted kids have had contact with their birth families, according to 2009 data.) I see my son all the time, and that this is a basically happy story.

Still, people seem confused about the conditions of my adoption. They also seem to think that I'd like to make a career out of having other people's babies. Once, a coworker asked me, while I was still pregnant, if I wanted to be a surrogate after I had this baby: “I have these friends who are looking for a surrogate! Is that something you’d be interested in doing?”

“No, I am not going to become a baby factory for other people now," I wanted to say. "I got drunk and was careless with condoms one night; that doesn’t mean I’m going to start renting out my uterus.” Instead, though, I think I just said something like, “I can’t even think about that right now.”

"I am not going to become a baby factory for other people now. I got drunk and was careless with condoms one night; that doesn’t mean I’m going to start renting out my uterus."

For all kinds of great reasons — decreased stigma for single mothers, increased access to birth control and abortion, and so on — adoption is far more rare than it used to be. So I know that my story is unusual. And in my experience, it seems even more unusual for a birth mother to be out and proud, or to casually mention her son when the topic of children comes up. I know that there are very few social norms and scripts in place for what to ask a person who you’ve just found out is a birth mother. I know that people generally mean well, and that the details of my situation are a lot to absorb at once. And that’s all fine.

All I ask is that, if you ever meet a woman who tells you she’s a birth mother, take a moment to process what she’s just told you before you start asking questions. If my experience is any indication, it's possible she’s already answered you.