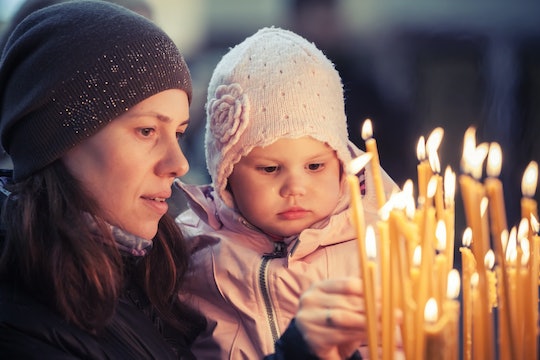 Actually, We Do Need "Thoughts & Prayers" After Mass Shootings, Here's Why

I was teaching a group of children at church when reports started coming in about the shooting in Sutherland Springs, Texas. Soon, we knew that the toll had reached 26, with numerous children and family members among the victims. Kids who had attended Sunday school. People sitting in the pews. It hit a little close to home. After all, I’m from a small Southern town and attend a small Baptist church. I am a mom.

It could have been my church. Members of my family might have been hurt; my children could have been killed. These attacks keep happening — in big cities, in remote towns; late at night in clubs, early in the school day — but those that occur somewhere familiar send a bigger chill.

Soon enough, “thoughts and prayers” began to wash over Twitter, public statements, the news. It was all so familiar. But this time, the chorus of people lashing out at those sending prayers was louder, more excitable. It was angrier.

It's become the norm to comment on any and every social media thread with "praying!" or "thoughts and prayers," and we constantly hear politicians and leaders and ourselves say things like that. Are these statements empty? Perhaps. Sometimes, "praying" is something we say, not something we do, which turns "thoughts and prayers" into nothing more than a cheap sentiment dispensed by those who could do more. But can prayer help us? I believe so. Does it make things worse? Certainly not.

When I think of the future, I am tempted to fear. This week was Texas, but what about next week? Mass shootings seem more common every day. Violence only seems to escalate, and I wonder: as a Christian, how should I respond? What should I do when I wonder what’s happened to the world?

One thing I think about when tragedies like this happen is that we are all affected because we are all connected. My faith teaches this through the writing of Saint Paul, who compared the church to a body. If one part hurts, the rest suffers.

This is true of our country as well.

I believe God is capable of changing the hearts of leaders.

As Americans, we should all be hurting because of the pain of those among us, whether they are in Texas or Las Vegas or Orlando. We can’t simply turn off the news and go our own way. As the Bible puts it, we should grieve with those who grieve, feeling their pain as if it were our own.

Then we should pray for them.

I’m not talking about momentary wishful thinking that things might improve. I believe people of faith need to intercede, to go before God on the behalf of those who are hurting and ask him to comfort them. I believe it matters that I, and others across faiths, pray earnestly and wholeheartedly for the healing of those who are hurting. And I believe we need to ask God to give wisdom to our leaders so they can address the issues that face our nation today. Because they need it.

When it comes to questions of gun-control laws and legislation, there is a whole spectrum of views, across religious affiliations and also within them. If you believe that new laws are needed to prevent attacks like these, get involved, call your representatives and work to see that happen, but that doesn't mean you shouldn't pray to see those changes happen as well. I believe God is capable of changing the hearts of leaders.

They are merely men and women, aren't they?

Prayer is important to many people because they believe that God hears and answers prayers. I take the position that devoted prayer can help start the healing for others because I believe God can heal.

I also want a safer world for my children, and I believe prayer has power to change it.

Some people think that thoughts and prayers are inadequate because only legislative action can effect change, but if laws were sufficient to prevent people from committing terrible acts, there would be no crime at all. Instead, crime rates continue to rise, and murder always makes the evening news. Obviously, it will take more than new laws to solve the problems that we have.

I am saddened to think that my prayers offend some who are likewise sickened by these attacks, both because that is not my intention, and also because prayer is not the problem. Like them, I also want a safer world for my children, and I believe prayer has power to change it. That isn't flippant. It's faith.

More Like This
Searching For Home As A Lifelong Renter
Home Reno Culture Makes Me Feel Like I Live In A "Before" House
I’m Getting Dual Citizenship For My Jewish Children, Just In Case.
New Report Shows 80% Of Pregnancy-Related Deaths Are Preventable