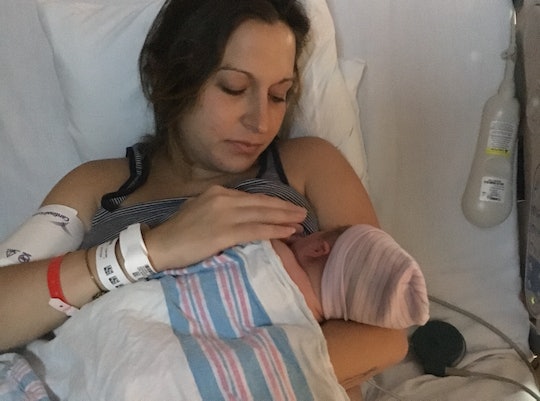 I’m A Crunchy Mom Who Thought The Epidural Was “Evil,” But I Was So Wrong

When I got pregnant, I was practicing yoga regularly, teaching yoga and meditation classes and a vegetarian. I was surrounded by all of these strong female role models, many of them mothers, and I was excited to join the ranks of these women who I had always looked up to. Many had home births, tub births or had given birth in a birthing center with a midwife. There was no question in my mind that when the time came, this crunchy mama would be having a "natural" child birth, sans epidural.

Early on in my pregnancy I hired a doula to support my husband and I on our journey to becoming parents, and chose to give birth in a hospital setting but with a midwife. I had watched The Business of Being Born at least a dozen times during the first trimester while all I had the strength to do was lay on the couch and eat ice cream. I became more and more convinced that I did not want any medical intervention during my birth. I was way too chicken to give birth at home so I liked the idea of being in a hospital but was brainwashed against using an OB-GYN (OBGYN = epidural = pitocin= EVIL).

As the months went by, my fantasy birth scenario became more and more a part of my daily inner dialogue.

As the months went by, my fantasy birth scenario became more and more a part of my daily inner dialogue. We met with our doula, discussed our birth plan, and took a natural birth support class led by a super crunchy earth goddess while my husband diligently took notes.

I bounced on a yoga ball at my desk at work to keep my hips nice and flexy, drank pregnancy tea, definitely did not eat any soft cheeses, and did everything I was supposed to do.

Around 28 weeks, I sat at my desk bouncing on my dang birthing ball when I noticed that my ankles had swelled up to the size of small tree trunks. It was July and I was pregnant so I didn’t think much of it. I put my feet up on my desk and tried to relax. I had an appointment with my midwife later that afternoon and knew everything would be fine. The swelling subsided somewhat and I left work to walk the few blocks to my appointment.

The midwife called me into the room, I awkwardly clamored my way onto the table and she wrapped the blood pressure cuff around my arm while chatting about the weather. She paused for a second, asked me if I was nervous and when I replied “no…” she asked me to take a few deep breaths and then took my blood pressure a second time. She did her best to reassure me that everything was fine but that my blood pressure was pretty high and that she was sending me to the emergency room "just to be safe." She told me how to get to the maternity ward and I somehow managed to stop panicking long enough to call my husband and get in an Uber, bound for the hospital.

After being hooked up to a machine that monitored my baby's heartbeat and took my blood pressure every few minutes, I was told to go to the bathroom and pee in a cup. By that time, my husband had arrived and we sat waiting for the midwife on duty to tell us what was going on. She came into the room and told me the protein in my urine was elevated, I had preeclampsia, and would likely need to be induced. She told me she didn’t have time to talk to me about it any further because she was on her way to a birth but would call me the next day.

I had to go home and sit with this information for a full 24 hours with unlimited access to Google and all the horror stories I could read until I got any more information. She did call me the next day as promised, and referred me to a high-risk doctor who assured me that me and my baby would be fine and that she would monitor both of us two times a week, in addition to my weekly midwife visits. She told me that I could wait and see how things went — and that I did not need to be induced.

I wound up leaving my job a month before my due date so I could stay home and try to keep my blood pressure down. I still clung tightly to my birth plan and tried all the natural remedies intended to make my baby come sooner in order to avoid an induction. I managed to keep my blood pressure at an acceptable level, my baby was developing nicely and did not seem distressed, and my due date approached without complication.

Everything I had planned, everything I felt so strongly about was being taken away from me.

The day after my due date, my mom came to visit and take me to my high-risk doctor appointment. They took my blood pressure and for the first time in a month, it was high. They did an ultrasound and told me that my fluids were low and that I needed to go to the hospital and have my baby "right now." I asked if I could wait for my husband to get home, or if I could go home and pack my bag, and they told me “no.” I still thank my lucky stars that my mom was with me that day, otherwise I may have crawled out onto the sidewalk and just laid there crying until a street sweeper hosed me into a curb.

When my mom and I arrived at the hospital, a midwife ushered us into a room. She began to explain the induction procedure, telling me that I would need to have my blood pressure as well as my baby's heartbeat monitored, and would need to spend most of the time strapped to machines and in bed. I felt like someone had just punched me in the gut. Everything I had planned, everything I felt so strongly about was being taken away from me. At that point I had told my natural birth plan story so many times that it became a part of my identity as a pregnant woman.

My husband arrived after the had started the induction by inserting something called a cervical ripener and they were about to start the dreaded pitocin. My water broke and along with it came intense contractions that made me feel like my abdomen was being ripped in half. The midwife came in to check how far I had dilated and I wouldn’t let her anywhere near me. The pain was so intense I did not even want her to touch me. “If you can’t even let me examine you.. I think you may need an epidural,” she said. At that moment I realized that she was right. I needed an epidural and you know what, I was totally cool with it. I got the epidural and my husband and doula sat there just chatting our way through the next 12 hours until it was time to push.

The epidural seriously rocked. I didn’t feel any pain, it was like I was just sitting there casually waiting for a train to arrive, not waiting to push a child out of my body. I was still able to move around a bit and feel when I had to push. I still had my doula to rub lavender oil on me and my husband to hold my hand and tell me what an amazing job I was doing.

Just because I got an epidural didn’t mean I couldn’t still be in charge of my body during childbirth; in fact, I think I was even more focused and determined than I would have been if I had been clenching my jaw through hours of mind-numbing contractions.

A few hours later, after my son arrived safely into my arms, I started to realize that I can still be strong and crunchy and also enjoy not having to feel like my body is being torn in half. I had become so attached to the process of how I was going to give birth that I had completely lost sight of the fact that the way you get to the end result has no bearing on what kind of mother you will become. You can rock an epidural and still go on to be the kind of mama who wears her baby in a sling all day while making her own nut milk, if that is what you want.

We put so much pressure on women to feel like they have to be able to be everything all at once. We make them feel like the only way to be a good mother is to put all of your feelings aside and sacrifice everything for your children and this starts at child birth. Would I have loved to have this badass earth goddess natural birth story to tell? Sure I would. But in the end I get to be a mama to this amazing little human and who really cares how he got here.

More Like This
Turns Out, You Can Dilate Pretty Far Before You Actually Go Into Labor
Pitocin Induction: What It Is & The Play-By-Play
This Is How Your Water Breaks During A C-Section
21 Earthy Baby Girl Names For Your Little Force Of Nature