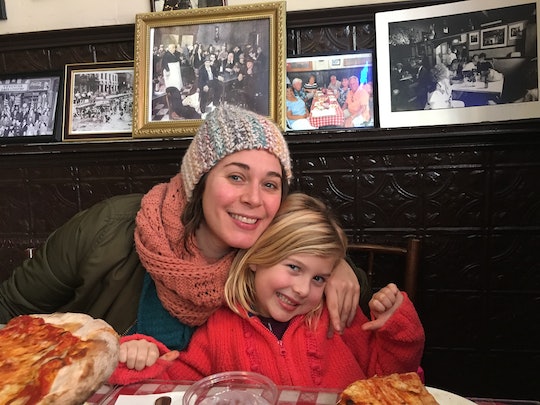 Why I'm Letting My 7-Year-Old Wear A Bikini

Before I became a parent, I had my own ideas for how I would dress my child. She’d be a savvy, gender-neutral, modern day kid who didn’t care about pink and frilliness. I was a feminist, after all, and I figured my kid would march to her own beat, rather than taking cues from social norms. So you can imagine how surprised I was when, not long after her second birthday, my daughter began to develop her own fierce fashion sense. She almost exclusively wore skirts and dresses, and everything had to be pink or covered in sparkles.

For a while, I tried to introduce my daughter to other options — “hey! If you wear pants, you won’t scrape your knees or end up with muddy legs today!”," I used to tell her — but to no avail. She was set in her ways. I learned that it didn’t really matter how I felt about her clothing choices, so I adjusted accordingly. Aside from occasionally urging her to wear a jacket, I became completely hands-off about what my daughter put on her own body. It was, after all, her own body, and respecting her sartorial choices seemed the best way to be a truly feminist parent.

Then summer crept around. My daughter was 3 years old, and we shelled out the cash for a pool membership. I bought her an adorable one-piece swimsuit with blue and white stripes and of course, a pink bow. But the first day she wore it to the pool, she was disappointed to see that other girls had on two-piece suits. She demanded to have one, but I told her no.

After much thought, however, this year I've decided to give my daughter what she wants. I'm buying her a bikini — even though she's just 7 years old and I frankly don't feel 100% comfortable with it.

When my daughter first asked me for a swimsuit, I said no. It felt inappropriate for a 3-year old to want to show off her body in a two-piece. The way I saw it, a child’s swimsuit should simply be something to put on their body to swim in. It didn’t need to show off her belly or emphasize body parts she didn’t even have yet. My kid strongly disagreed. To her, everything was a fashion statement, and her swimsuit should be no exception. But this was one battle I just wouldn’t back down on.

For the next few years, I let my daughter pick out her own swimsuit, but it was always a one-piece. I’d watch her gaze adoringly at other little girls' two-piece bathing suits, but I still insisted on buying her one-pieces. "I'm sorry, honey. I just don’t think it’s appropriate,” I’d tell her. “Maybe in a few years.” And while I certainly didn’t judge other parents for letting their daughters wear two-pieces, it didn't feel appropriate for my daughter to be out there strutting her stuff.

I realized that if I really believed that she should be able to make choices about her own body, then I would have to honor that, even when those choices made me uncomfortable.

I knew that when my daughter got a bit older, I would have absolutely no say in what swimsuit she wore, but at that point she’d be more mature and could be trusted to make decisions about how much of her body to show or not. But at 4, 5, or 6? Nah. A bikini would have to wait.

Then, a few weeks ago, I had an epiphany when my daughter asked me if she could cut her hair. She’d been trying to grow it for many months, so I asked her to consider whether or not chopping it off was something she really wanted to do. She told me that she desperately wanted to cut it, right then and there. I thought back to how many times I cut my hair in my youth, or dyed it every color of the rainbow. I thought about how it had felt so liberating to make my own personal choice about what I wanted to do with my own body. It was just a minor act of rebellion, but really, I just liked expressing myself with different hairstyles.

After thinking it over for a moment, I handed her the scissors. I told her it was her body and if she really wanted to cut off her hair, that was completely her choice. “Just do it over the trashcan!” I called after her as she ran up the stairs to peer into my bedroom mirror and give herself a trim. A few minutes later, she was thrilled with her work.

Later in the week, we were cruising the aisles of Target when we came across the springtime bathing suit display. I held my breath and watched as my daughter swooned at the sight of two-piece swimsuits. She weaved in and out of the aisles, stopping to hold the ones she really liked up to her body. Then she put each suit back on the rack and moved on, knowing what my answer would be if she asked to buy them.

In that instant, I realized that by denying my daughter a two-piece, I wasn’t really honoring the “your body, your choice” philosophy that I had always believed in. I had always told my daughter she didn’t have to hug someone she didn’t want to or let anyone put their hands on her if it made her uncomfortable. I allowed her to make her own clothing choices from early on, too, even if she looked ridiculous. I'd even allowed her to cut her own hair. I did this so she would know that no one else had ownership over her own body, because it didn’t belong to anyone else. It belonged to her. I realized that if I really believed she should be able to make choices about her own body, then I would have to honor that, even when those choices made me uncomfortable.

It’s her body, her choice, now and always.

As we moved away from the bathing suit aisle, I looked at my daughter and asked, “So, do you still really want a bikini this year?” Her face lit up. “Yes, mama!” she hollered, clasping her hands together in excitement. “You know I’ve always wanted one more than anything!”

I nodded. “Well, it’s your body, right?”She squealed and jumped up and down.

I’m still not thrilled that my 7-year-old will be rocking a bikini this summer. But at the end of the day, it’s not really my business. It’s her body, her choice, now and always.