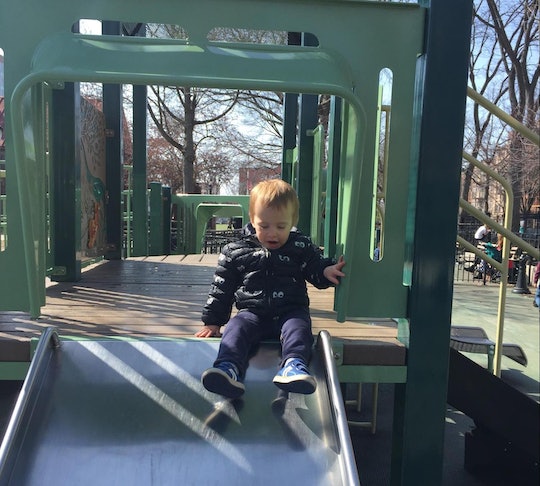 The other day I was with my toddler at an indoor play space, sitting on the gym floor watching him attempt to spin a hula hoop on the gym floor when another toddler came over and grabbed it right out of his hands and ran off. My son was mostly unfazed and just toddled off to go play on the slide but I looked around and wondered where the assailant’s grownup was. I noticed that the majority of the parents or nanny’s were sitting against the wall, chatting with other caregivers or on their phones and it dawned on me: I think I might be a helicopter mom.

For many months, momming was just brutal. My son was a terrible sleeper, he screamed 99.9 percent of the day and I had to eliminate whole food groups from my diet to breastfeed him due to his allergies. I was just sort of existing in this half-asleep, malnourished fog the majority of the time. Fast forward 19 months and we are both sleeping (mostly) better, can eat whatever we want and life is finally starting to feel normal again. The haze I was existing under is starting to lift and I feel like I can see the sun again. The world feels a little brighter when you have a slice of pizza in your hand. I feel like we have finally found our footing as mother and son and sometimes I feel the need to make up for lost time.

I have tried to go back to work three times since my son was born and each time I only lasted an average of a week.

As corny as it sounds, watching my son play is my favorite part of being a mom. Before he was born I was a preschool teacher, so observing children is something that is second-nature to me. I love to see his little face light up when he sees something he’s excited about. I love to imagine what he must be thinking about, what it feels like to look at the world through his eyes.

When I look at a pigeon, I see a gross rat with wings and my son sees an amazing creature that is totally worth chasing and admiring. When I watch my son play I see all the things that I have worked so hard to teach him begin to take shape. I’ve watched as he signed/said “Thank you” to a little boy for giving him a ball and my heart melted. I’ve watched him actually wait his turn to go down the slide. Today I watched him stop himself from knocking down another child’s block tower because the little girl told him to stop just as he was about to put his hands on it.

In watching my son play I get to see him grow, I get to see his personality take shape. Realizing how far we have already come together, all the craziness of our early months together seems so insignificant. I have tried to go back to work three times since my son was born and each time I only lasted an average of a week. I would rather tough it out financially for a few years and spend my days covered in jelly (why are toddlers always sticky?) and at the mercy of my sons unpredictable nap schedule because there is just something so magical about the first few years of life and I consider myself lucky to get to watch my son grow.

My mom cut my Cheerios in half until I was 3 — I come from a long line of worriers.

Helicopter parents get a bad reputation — and believe me, I get it. Honestly though, I think you can hover and still be setting your kid up to be independent and well adjusted down the road. My mom cut my Cheerios in half until I was 3 — I come from a long line of worriers. Add in my master's degree in early childhood learning and the fact that I know way too much about child development, and you have a recipe for disaster. The thing is, my son is going to be 2 years old, not 20. I don’t plan on doing his science fair projects for him or leaving training wheels on his bike until he's 14.

The best metaphor I can think of is a new building under construction. When the foundation is still being built there is lots of scaffolding, lots of support. As the layers get added and the construction gets stronger, those supports start to come down. I won’t need to follow my son around on the playground forever, just until I know that he can hold his own.

So yes, I might be a little bit of a helicopter mom, but it’s only because I am trying to help him learn the skills he needs to be independent. I also realize how fleeting this short time in his life will be. I already almost don’t recognize my baby in this little boy’s face. He is growing and changing so quickly that I just want to soak up the moments that I have where he actually wants me to hold his hand at the playground. The world is a scary place and I won’t always be there to hold his hand and it terrifies me. So for now, I hover.

Not so close that he’s not free to roam and explore, but just close enough so I can soak in all of his beauty while he still lets me stay close.