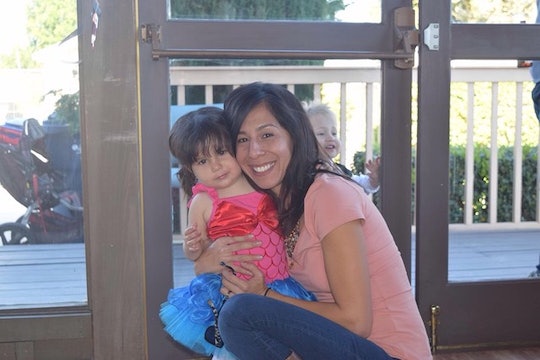 If I could take a shot every time my daughter declared I was a mean mom, I’d be sloppy drunk by early afternoon and completely passed out by dinnertime. I’m used to hearing that I’m unfair, or "not a nice mommy," or just that I’m a straight-up mean mom several times a day, and especially on off days when everything just seems so hard. And although it hurts my feelings when my daughter labels me as a mean mom and it makes me feel like I’m not doing something right, most of the time I just accept that I’m a mean mom and I’m more than OK with that.

I’m the first to admit that I am tough on my girls. Not in a physical sense, but I do hold my children accountable for their actions and their behaviors, regardless of the fact that they're young. Yes, they're toddlers, but they're also really smart and they know right from wrong most of the time. For instance, if they get a hold of the markers, I expect my 4 year old to know not to color on the walls. However, I completely anticipate the 2 year old to go rogue and attempt to color anything and everything. That doesn’t mean she won’t get away without some sort of talking to or a consequence, though, like not being able to use the markers for the rest of the day. And that usually results in being called a mean mom by my girls. You know what, though? I'm OK with that.

I am definitely the first one to call my daughters out on their behavior if I believe they're misbehaving. If they are cranky, I’ll ask them if they're hungry or tired. If they're crying over the smallest thing, like dropping a marker or not being able to open the door to the playhouse, I’ll ask them to take a breath when they are angry and try again or redirect them toward something else. But if they are running around the house, making messes, or not listening to me, then there will be consequences, like a timeout or no dessert after dinner, or no use of the Kindle that night. I know that my eldest daughter can be a little dramatic and that my youngest can be very assertive. I know when they need to rein in on the dramatics (fake crying after a fall for instance, or pulling a girl’s hair because she was nearby) or when to step in and remind them when words need to be substituted for actions.

Being a “mean mom” doesn't mean I stand over my kids and scream at them all day, but it does mean I hold my daughters accountable. They know there are consequences for bad behavior, even if they really don’t like that.

There have been times when my daughters are acting up and another parent will say it’s OK or not to worry about it, but I won't let my girls get away with it. Some actions and reactions are not OK, and my girls need to be taught that. I love the moms who understand that my girls are still learning and forgive them for their missteps, but as their mom it’s my responsibility to explain to them why we need to take a beat before we act. Many of our talks include teaching them about right from wrong, having to listen with their ears, and using words, not fists (or teeth, in the case of the 2 year old) — and these talks usually take place with my girls wrapped up in my arms. Being a “mean mom” doesn't mean I stand over my kids and scream at them all day, but it does mean I hold my daughters accountable. They know there are consequences for bad behavior, even if they really don’t like that.

The judgmental stares don’t bother me quite as much as when my daughters cry and tell me I’m a mean mommy. They don’t know how difficult it is not to cave every now and then and just give into their tears. They don’t understand how hard it can be to be the one who has to remind them that they promised to clean up the dozens of dolls they poured out on the floor before moving on to painting.

I’ve been called a “tough” and “strict” mom before by relatives, and they're right, I am a little strict when it comes to my kids' sugar intake or the amount of times I’ll look the other way when they jump on the bed before I ask them to get down. If making sure they aren’t completely hyped up at the end of the day or that they don't break an arm makes me a mean mom, then so be it. I’ll take that label. I'll wear that badge with honor, even if that means other moms will look at me with judgmental glares in Target when I tell my daughter through clamped teeth to “Put. The. Toy. Down. Now.”

But what those moms in the department store don't know is that I've already talked with my daughter several times about the fact that we can't always leave the store with a new toy in hand. So am I mean for standing by my promise? I sure as hell am, and I'm proud of that. In my eyes, I’m not being mean. I am, however, standing firm and showing my daughters that I say practice what I preach. As their parent, I think that's an incredibly important lesson for them to learn.

The judgmental stares don’t bother me quite as much as when my daughters cry and tell me I’m a mean mommy. They don’t know how difficult it is not to cave every now and then and just give into their tears. They don’t understand how hard it can be to be the one who has to remind them that they promised to clean up the dozens of dolls they poured out on the floor before moving on to painting. My girls understand that they're responsible for cleaning up their messes, but they are toddlers so of course I don’t expect them to clean up everything without any help, but I do expect them to help and not cry and throw a tantrum when it’s time to follow through on their promises.

To my kids, I’m a mean mommy when they don’t get to have three lollipops in one day, or when they don't get out of helping clean up their gigantic messes, or when I won't let them watch endless TV, all because they ignored my directions to stop jumping off the couch.

I hope that one day they understand that I’m just trying my damnedest to make sure they grow up to be really good people. I want them to know that their mean mom is one who not only supports them, but who also loves them unconditionally. I may be a mean mom, but I want my daughters to respect me as a person and as their mom, and I want them to hold me accountable too. If I made a promise and then forgot about it, you better believe my 4 year old is the first to remind me.

Honestly, it feels really good to be OK with the type of mom I am. Instead of trying to fit in with other moms or follow specific parenting philosophies, I’m just doing parenting as I see best. Even if that sometimes means being called a mean mom by my daughters and outsiders, I'm fine with that. At the end of the day, you may call me a mean mom, but all I see is a woman who's a damned good mom to her girls.