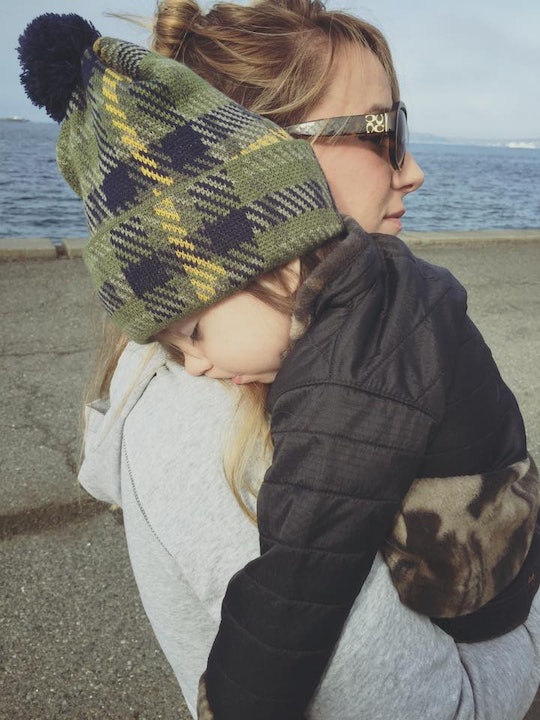 I'm A Mom Who Once Had An Abortion, & I Don't Regret It One Bit

Earlier this week, the Ohio legislature passed its so-called heartbeat bill. If signed into law by Republican Gov. John Kasich, the heartbeat bill would ban abortions the moment a fetus's heartbeat is detected, or approximately six weeks into a pregnancy. When I learned about the proposed legislation, I couldn't help but shudder. Years ago, when I was 22 years old, I found myself at my gynecologist's office, about to terminate an unwanted pregnancy at 7 weeks — which I wouldn't have been able to have done under the proposed Ohio law.

As a woman who has had an abortion before becoming a mom, many anti-choicers like those who support the heartbeat bill think I am unfit to be a parent. However, I strongly believe that having an abortion at 22 doesn't make me a bad mother. If anything, I think it's the reason I'm able to say that I'm a wonderful mother today.

Years later, I found myself once again back in the stirrups at the gynecologist's office, after discovering that I was pregnant. But this time, I planned to continue the pregnancy and become a mom on my own terms.

As a woman who has had an abortion before becoming a mom, many anti-choicers think I am unfit to be a parent. However, I strongly believe that having had an abortion at 22 doesn't make me a bad mother. If anything, I think it's the reason I'm able to say that I'm a wonderful mother today.

When I had my abortion, I had just graduated college and was enrolled in a post-baccalaureate teaching program while working full-time and living with my then-boyfriend. I had never been so busy, exhausted, and overwhelmed, and remembering to take my birth control pills had fallen to the bottom of my list of priorities.

At the time, I didn’t want to be a mother; not then, and (I thought) not ever. I didn't have a steady source of income, and my relationship with my ex wasn’t healthy; we fought and argued and seemed to resent each other more than love one another. The pregnancy and nausea and constipation and hormones felt like a series of betrayals; my body was turning against me, pushing me toward a future I didn't know, recognize, or want. So I made a phone call, presented my insurance card to the kind lady at the local Planned Parenthood, forked over $250.00 and took back control of my body.

My ex and I both knew that we were ill-equipped to parent a child because we couldn't care for ourselves, let alone someone else. For us, terminating the pregnancy was both the right choice and the obvious one.

Many men and women have asked me what it’s like to be a mother who’s also had an abortion. Do I feel guilty?, they ask. Do I regret having an abortion all those years ago? Would I go back and do things differently, if I could?

I’m open and unapologetic about my abortion. I believe it is a right I have as a woman who deserves to make her own choices about her own body. Because I’m honest about the choice I’ve made, many men and women have asked me what it’s like to be a mother who’s also had an abortion. Do I feel guilty?, they ask. Do I regret having an abortion all those years ago? Would I go back and do things differently, if I could?

Every time I answer those questions — sometimes in detail, sometimes while rolling my eyes— I remember that it was my ability to have access to affordable healthcare, to birth control, and to a safe and legal abortion, that made it that much easier to decide when I was ready, and able, to have a baby.

The day I had my abortion, I learned a lot about courage and sacrifice and the responsibility that comes with being sexually active. I also became acutely aware that the continued funding of women’s healthcare is vital and that there are health care professionals who are not only willing to make you feel respected, cared for and valued, but are also willing to do so at a price. They’ll walk through picket lines and put themselves in harm’s way, just so 22-year-olds like me can have a future.

Ultimately, having an abortion helped me become the mother that I am today.

Years later, when I decided to continue with my pregnancy, I didn't forget those lessons. With my partner by my side holding my hand, running his fingers through my hair and telling me that I could do this, I pushed and strained and brought our wide-eyed son into the world. Not because I had to. Not because I was forced to by anti-abortion legislation that would make it illegal for a woman to have an abortion after six weeks. But because I wanted to.

Ultimately, having an abortion helped me become the mother that I am today, because it gave me a better understanding of how I would feel when I was eventually ready to be someone’s mom. I knew what it felt like to be incapable of motherhood, so that when I was finally ready to have a baby, I knew I was really ready.

As a mom who has had an abortion, I wake up every day reminding myself that I have the ability to choose what to do with my own body, and I try not to forget that I'm lucky to live in a state that allows me to exercise this choice. Legislation like Ohio's Heartbeat Bill reminds me that this choice is almost always in peril, but it gives me hope that as long as there are people who are willing to take that choice away, there will be women — mothers, daughters, teenagers and grandmothers — that will stand in their way.