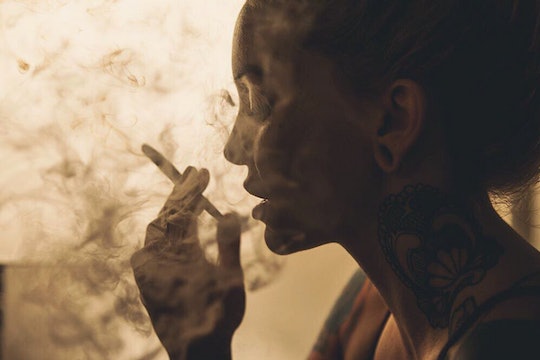 I'm A Mom Who Smokes Pot With My Kid In The House, & I'll Tell You Why

When I was a child, I was a proud DARE kid. I believed Deputy McGruff when he told me that if I smoked a “doobie," I’d become entangled in a world of crime, failure, and depression. In my teens I thought that only musicians and skateboarders fell victim to "reefer madness" and that weed would impede my brain's development. Plus I hated the smell: it was like an even worse version of patchouli.

It wasn't until 10 years later that I smoked pot for the first time. I remember nervously watching my then-husband show me how to take a hit. I was floored to learn that the plant-based narcotic offers a wide range of benefits for a person’s brain and body. I didn't always smoke weed, but I do now. I'm a mom who smokes pot, and occasionally, yes, my kid is around. Here's how I talk to her about it.

Two years ago, I cut back on my alcohol intake, and was surprised to notice that my joints cracked less, I slept better, and my skin cleared up. But I was bored and missed my nighttime beers, so I opted for smoking pot instead. I only smoked when my toddler was sleeping, or when she was at her father’s house.

Now, I use pot in moderation. I probably smoke about one joint a week — unless it’s the weekend, when my daughter goes to her dad’s house. And then? Mommy gets lit.

I'll be honest — I really enjoy smoking weed. Unlike alcohol and caffeine, which can have negative side effects, the worst experience I’ve ever had with marijuana resulted in some semi-amusing paranoia and lethargy the next day. I might eat too much, laugh too hard, or have too much deep and connecting sex with my lover, but I'll feel fine afterward.

It's perfectly legal for me to smoke weed. After marijuana became legalized for non-medical use in Colorado in 2012, my home state of Oregon quickly followed, legalizing pot in 2015. There are numerous documented health benefits of marijuana: people fighting cancer, for instance, are sometimes prescribed tetrahydrocannabinol (THC) to treat nausea, and cannabidiol (CBD) oil has been proven to relieve inflammation and muscle pain. I've also smoked weed to treat my anxiety, or if I just wanted to blast Kendrick Lamar and power-clean my house at 11:00 p.m.

We typically think of marijuana as a drug, but according to Merriam-Webster, a drug is "a substance other than food intended to affect the structure or function of the body." In that context, pot is far less potentially dangerous than caffeine or sugar or alcohol or cigarettes — even though unlike those other substances, it's still illegal in most of the United States.

Last year, I smoked weed while my daughter was in the house for the first time. I was hurting pretty bad: my spine was compressed from a dance injury, and the subsequent migraine made for an unbearable morning. So I dug around in my purse for a CBD pre-rolled joint that I had purchased for just this occasion. (CBD is not psychotropic, which means you don't "feel high"; instead, you feel calm and relaxed. That's why it's more often used to treat things like anxiety, nausea, and pain.)

My head throbbing and spine screaming, I took some deep inhales of thin paper and shredded plant while leaning against the kitchen counter. After a few deep breaths and some coughing, I took a sip of water. My daughter, who is 5, was playing with Legos across the room, and she paused. She had never seen Mommy smoke anything before, so she was curious about what I was doing.

I held up my joint as I pushed open the nearby kitchen window. “This is called marijuana. It’s mommy’s medicine," I told her. "If you smoke it you will get very sick, do you understand?” She nodded, and went back to playing. That was it. I strongly believe that, “This is bad for you, but it affects adults differently” is a message that kids can learn from an early age. It's honest, and it doesn’t patronize them or treat them like they’re unable to understand.

My daughter is still too young for a serious conversation about weed, but I do hope she is near to adulthood if or when she takes her first hit. There is some research to suggest that marijuana use in your teens is correlated with a lower IQ, and I certainly don't want her to risk any potential impairment. I could certainly share a story or two of my poor judgement, and hope that my daughter learns from my follies. When that time comes, I can already tell that she's smart and cautious and will listen carefully to my warnings. I don’t believe that she will find reasons to use alcohol or drugs unless she’s impacted by peer pressure. Heck, she doesn't even eat candy.

When I do talk to my daughter seriously about pot, however, I’m not going to paint a hysterical picture of reefer madness. Children know when you are lying to them, and when they eventually figure it out, they stop trusting you in general.

I’m glad I didn’t smoke marijuana when I was younger, because it could have affected my brain development, my hormones, my moods, and my activities. I’m relieved that I finally tried pot once it was legal and available. I hope my kid doesn’t smoke (much) pot when she’s a teenager, but if she does, I hope that our candid conversations will help her make good decisions for her mind and body. When it comes down to it, I won’t lie to my daughter about my marijuana use, because I try not to lie to her generally and because I don't think it's anything to be ashamed of.