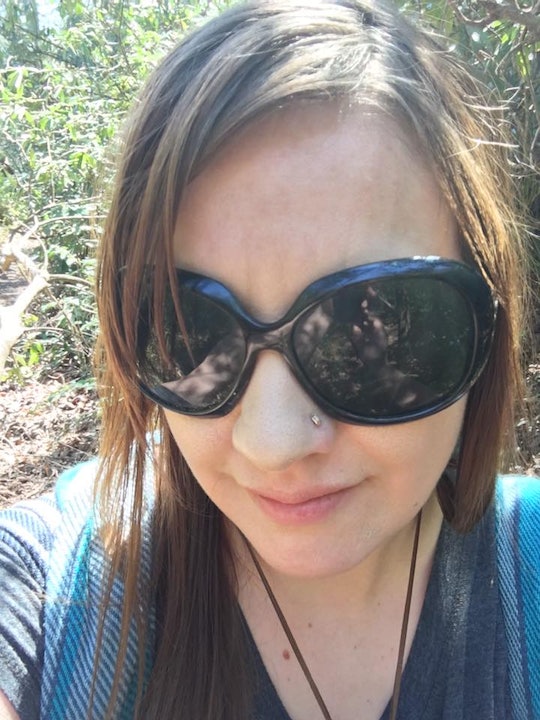 I Used To Self-Harm, & Every Day Is A Struggle

Warning: This post contains references to mental illness and self-harm.

I was 14 years old when I started self-harming. I was in French class, and I used a ruler. The ruler was plastic, and I ended up with bloody wounds on both wrists. I could go for months without self-harming and feel fine, but then something would happen — a breakup, a bad grade, an ugly fight with my parents — and I’d break out the razor blade I kept stashed away just for this purpose. The habit continued through college and grad school, with a brief hiatus when I started seeing a therapist. But they wanted me to go to a support group at the local mental hospital, and after going once, I never went back.

When I knew people would see my wrists, I cut in other places. I cut my thighs. I cut near my elbow on the outside of my arm. I cut above my ankles. I cut anywhere I thought no one would notice. When people saw my scars and asked what they were, I'd make up some stupid lie, or say that I accidentally burned myself.

The truth was that cutting felt good. Yes, it hurt, but as those who are prone to self-harm will tell you, it was a good sort of pain — a pain that contrasted with the terrible psychic pain I was suffering at the time. When I cut, it felt cathartic, relieving my mental pain even as it hurt me physically. It was a kind of terrible band-aid to my emotional agony, but it did absolutely nothing to make the hurt go away, instead leaving me with scars all over my body.

I kept at it, intermittently, until I got pregnant with my oldest son. I developed prenatal depression, and I wanted to cut. But I couldn’t cut, because I kept asking myself: What if the blade slipped and I hit an artery and I hurt my baby? So I had to stop. Nothing else could have made me stop.

After I had three kids, I stopped cutting altogether. What if they saw my scars?, I wondered. What if they asked why mama was hurt? Although I thought about it every once in a while, I couldn’t do it. But about a year and a half ago, my depression got really bad, and I cut my legs, in shallow scratches, with a kitchen knife. My husband freaked out. He sent me to my psychiatrist the next day. Clearly, something was deeply wrong.

I can see the things around me that make cutting a bad idea: a husband I don’t want to scare, children I love and want to protect. I’m able to step outside myself and realize who else I would be hurting by hurting myself. So I don’t do it.

I love my current psychiatrist. I started seeing her when I was pregnant with my second son, and once again developed prenatal depression. She was much better than the therapist I’d used during my last bout of prenatal depression. She treated my depression adequately. She listened to me. She also realized quickly that I had an anxiety disorder and ADHD. Slowly, she medicated me for those as well as my depression. Getting treatment effectively stopped me from self-harm. You don’t hurt yourself unless you’re depressed.

Last winter, I had a breakdown. I was in the throes of something called discontinuation syndrome, a phenomenon linked to withdrawal, which meant that I had stopped a psychiatric medication called Vraylar, which is used to treat bipolar disorder, and my mind went far, far off the rails. The chemicals in my brain were going haywire. I thought about hurting myself. I knew it would help end the pain, if just for a short while. But I knew I couldn’t hurt my family that way.

I am in treatment, and I feel much better. But that doesn’t mean I don’t struggle with the impulse to self-harm every once in a while. It’s an old, deeply ingrained impulse when I’m hurting: cut. Now. Cut yourself and you’ll feel better. But no matter how bad off I am, I can see the things around me that make this a bad idea: a husband I don’t want to scare, children I love and want to protect. I’m able to step outside myself and realize who else I would be hurting by hurting myself. So I don’t do it.

The impulse to hurt myself both torments and scares me at times. But those times are few and far between, because my depression is being treated. I have support in the form of my husband and my psychiatrist. And I have the motivation to keep myself mentally well: my children. That is enough to keep the wolves from the door. It may still be hard. But it’s livable now. And I am grateful for that.

More Like This
Stepmom Quotes & Sayings For Every Occasion
These 4 Sleeping Positions Will Keep You Comfortable After A C-Section
Ashley Graham On The “Fun, Organized Chaos” Of Raising Twins
These Stepmother's Day Instagram Captions Are Straight From The Heart