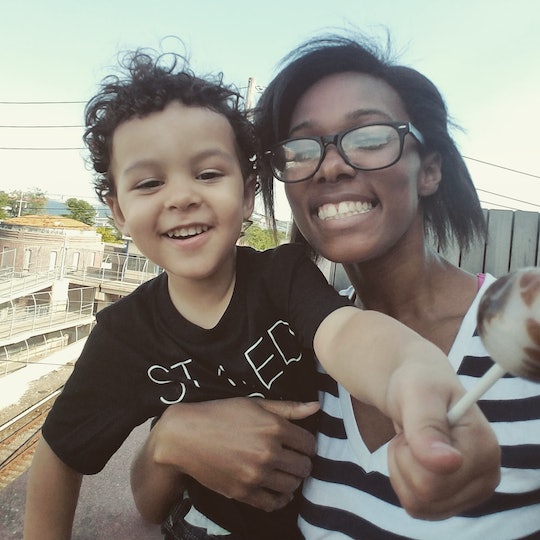 I'm Tired Of Being Shamed For Being A Single Mom

I never imagined that I would be a single mom. When I got pregnant, my ex and I were together and very much in love, and we had been together for almost three years. Yet because I was unemployed when I got pregnant and the bills were mounting, we decided it was best for us financially to live separately for a while. As the weeks turned into months and the months turned into years, we began to grow further and further apart, so eventually it just made more sense to break up. It was an amicable split and we're still good friends, but more than anything, our commitment is to our 3-year-old son and his well-being.

While being a single mom wasn't part of my original plan for motherhood, I realized pretty quickly that it's OK. I've learned to adapt to our new circumstances and make the best of our situation, and I've also learned that I am capable of handling any obstacle thrown at me. Sure, I would love to have a partner to commiserate with when I need a break, but I am a whole person and a complete parent without a partner. So it would be awesome if people would back off and stop asking me where my son's father is.

While I have fully embraced and adapted to my single mom status, it is still a hard concept for some people to understand. My ex and I were together before I got pregnant and we had talked about getting married, but we weren’t quite ready to take the plunge. When we found out I was pregnant, we did briefly discuss marriage, but I really didn't want to get married just because I was pregnant. I was fine with keeping our relationship the way it was until we felt ready to take the next step.

When my son was a baby, a male relative asked me if I was planning on marrying my husband.

“You have a child together," he said. I rolled my eyes.

That was the first of many times I would be faced with such a question. It's usually asked by men. Often, they're around my parents' age, so I think that the questioning and judgment stems more from their ore traditional way of thinking: obviously, a man has to marry a woman if he gets her pregnant.

Sometimes, it's a challenge to not get annoyed, especially when the person asking me these questions is a total stranger. Once, a cab driver asked me where my son's father was.

“He lives in California," I explained.

“I take care of me. And my parents are around to help," I said. He breathed a sigh of relief.

I am not ashamed of being a single mom. Do I hope to find a partner one day? Of course. But I'm incredibly proud of myself for being able to get up and be present 24 hours a day, seven days a week, 365 days a year for the past three years, without more than a few hours' break. That's why I get so frustrated when other men ask me why I'm not with my son's father: I feel like these people think of me as less than a person because I don't have a man in my life, when I have actually never felt more complete.

My ex lives in Los Angeles and we live in New York City, so it's hard for him to maintain a consistent relationship with our son, but they talk via Skype a few times a week and he helps me out financially when he's able. We maintain a good relationship, and I've never had to take him to court for child support or anything like that.

I think it's much better to have a child see a single mom struggle and come out on the other side than to see her in a difficult relationship.

I am incredibly lucky because I maintained a good relationship with my ex, and I realize that many single moms are not as fortunate. Many women I know have acrimonious relationships with the fathers of their children, which is something I think many of those passing judgment on single moms don't consider: we're single because some of the men we have dated do not make for good partners.

We now live in a time when we are not forced by societal conventions to stay in bad relationships for the sake of our children. I think it's much better to have a child see a single mom struggle and come out on the other side than to see her in a difficult relationship. We chose to have children with these men, but that doesn't mean that we're obligated to stay with them, or that they're obligated to stay with us.

Single moms are people too. We are no better or worse than any other moms — we just have to work a little harder because we're doing it on our own. We don't need to be defined by our single status, nor should we be criticized (or for that matter, needlessly applauded) for choosing to do it on our own. We don't need your validation or for you to agree with our decisions. We just need your respect.