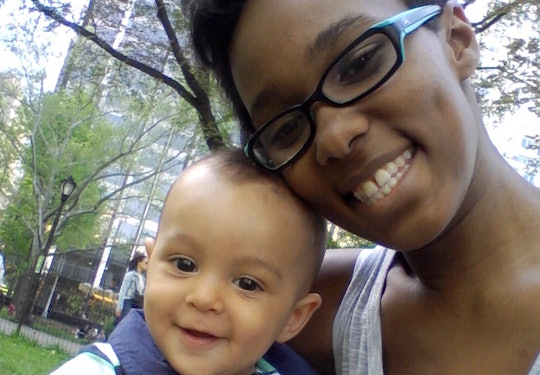 Maybe it’s an Aries thing, but I’ve always liked being in charge, which is how I came to be raising my son in my parents' house. I got pregnant unexpectedly and, since I was unemployed at the time, the birth of a child was a big financial strain on already-tight resources. My son's father was working 14 hours a day, and, in a near-impossible situation, we decided it would be better for me and the baby to go to stay with my parents. That way, we figured, I'd have a better shot at getting back to work. Our son was only a few months old at the time. Reluctantly, I agreed to go back east where my parents were, with the reassurance that it was only temporary. Well, the days turned into weeks and the weeks turned into months. I was no better off financially and moving back seemed impossible. So my son and I stayed. We ended up staying for three and a half years. I've been a single parent for that entire time.

Even though we lived with my parents, it was pretty much me raising my son all by myself. I changed all the diapers, gave all the baths, and put him to bed every night. I also got to make all the decisions: what he ate, what he wore, which pediatrician he saw. His dad was 3000 miles away; who else would make these choices? I know this sounds exhausting, but the funny thing is it feels like this is the most natural way to live.

I would hear my coupled friends talking about the compromises they had to make with their partners and go home and thank God that I didn’t have to deal with all of that.

It was easy for me to fall into a routine as a single mom. Like much of parenthood, you find in yourself the ability to manage a situation you never thought possible. Sure, I was tired and never had a minute to myself, but I also had the space to parent my son according to my instincts. If I wanted to breastfeed and co-sleep, no one could tell me that I couldn’t.

The first year was definitely the hardest, because I was trying to figure out who this little person was, and doing it with little help and little sleep. But as each year passed I felt more confident in my skills as a mother. Sure, I wished that his dad could have been there to hear his first word, or to see him take his first steps, but I knew that there would be plenty of other milestones he'd share as our son got older, and I was there, cheering my son on for every little success.

After I got used to the idea that it was going to be just the two of us, I found it oddly liberating. Parenting on my own made me realize that I was capable of not only doing it, but doing it with very little help. Yes, sometimes it was overwhelming and I was scared and anxious, but each day I was stronger and more secure in the decisions I was making for my son and for myself. I would hear my coupled friends talking about the compromises they had to make with their partners and go home and thank God that I didn’t have to deal with all of that. Sure, I would check in with my son’s father, but it was more a courtesy than actually asking his opinion.

The longer I stay single, the more I appreciate it. My son and I have a great relationship. We like to take walks around the neighborhood together, share popcorn, and cuddle up to watch a movie. We love taking trips to Target. It can be taxing to not get much of a break, but I can’t even imagine what life would be like if his dad and I had stayed together. Everything I have done over the last four years has been in service of giving my son the best possible life. As single mom with very little money, I have cultivated the jobs and career that would allow me to not only support myself and my son, but also be around for him. He has been my sole priority, the only target for my love and energy.

My son and I have finally moved back to the West Coast and into our own apartment, and now it is really just the two of us. His dad is close by and they see each other, but my son and I are the core of our lives. For the first time as an adult, I have my own space to do with as I please. I am looking into as much pink decor as possible because I love pink and no one can tell me no. I have begun to entertain the idea of dating again.

As much as I miss having a companion, I love having my freedom so much more, and can’t see myself giving it up anytime soon. Being a single mom has been such an eye-opening experience about who I am as a person, and what kind of person I want to be a part of our family. So when people ask me if I wish I wasn’t a single mom, I say that it wasn’t the way I pictured parenthood, but right now I honestly wouldn’t have it any other way.

More Like This
The Euphoric Jolt Of Rollerskating Was Exactly What I Needed
Stop Talking About Formula Feeding Like It’s Always A “Last Resort"
I Found Gender Euphoria In My Second Pregnancy
Ginger Zee Had A Perfect Response After A Troll Asked Her "Who's Raising Your Kids?"