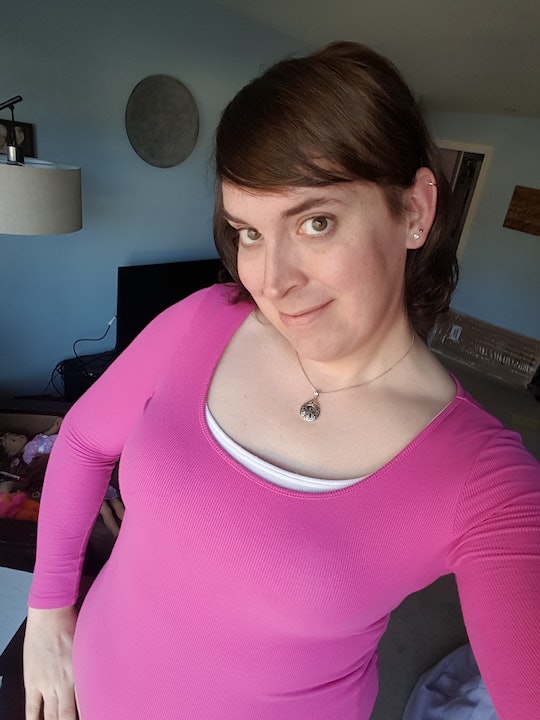 I'm A Trans Parent, & Mother's Day Is Tough For Me

We were in a crowded ladies' room on Halloween when the zipper on on my 7-year-old daughter’s cat costume got stuck. “DADDY!!!!," she screamed, nearly in tears. Almost immediately, I could feel strangers' faces snap around to focus on me and my face, which was covered in makeup. I quickly ducked into the stall to help my daughter and then patiently waited for the restroom to empty out. Thankfully, nobody was waiting outside for me.

Because I am a trans woman, using a public bathroom is a stressful experience for me, due to the ever-present threat that there will be someone in there who doesn’t approve of your choice in toilets. This stress is doubled when you're also responsible for the safety of your children. It took getting outed in a public restroom by my daughter for me to finally confront a question that had bugged me for a while: I needed to find a new parenting label for myself.

When a parent transitions, all sorts of cultural traditions are now open for reinterpretation, especially if the parent was in what was presumed to be a heterosexual marriage, as I was. One of those traditions is what your kids should call you, and the options are almost limitless. I am a divorced trans mom, but this Mother's Day, my kids won't be celebrating me — they'll be celebrating my ex-wife, because they don't call me mommy. And I have complicated feelings about that.

One of the most common questions that parents and adults ask kids is: “What do you want to be when you grow up?” While my friends would always give answers like “doctor" or “policeman" or “astronaut," there was one answer that I always wanted to give, but never could: "mom."

As a child, I desperately wanted to be a mother. Even today, it's hard to explain why. In retrospect, I suppose it had something to do with the fact that my mother and I had a close relationship, and I identified with her more than I did with my dad, but even that doesn't fully explain it. Honestly, a big part of my desire to become a mother stemmed from my desire to live a "normal" life — not as the boy people thought I was, but as the girl I was supposed to be.

After I told my ex-wife I was transitioning, one of the first questions she asked was, “But what would the kids call you?”

Back then, the idea of being able to transition genders was a foreign concept. I wouldn’t learn about it until I was much older, when I started flipping through my family’s dusty collection of old Encyclopedia Britannica volumes. So like many clueless trans kids who grew up in the eighties and nineties, I just tried to soldier on. I met a young woman who would go on to be my wife, and I moved to the country and had two kids.

For many, it was the idyllic life. But the thing no one talks about with gender dysphoria (the technical term for the belief that your own gender doesn't align with the sex you were assigned at birth) is that the feeling gets more intense over time. I battled increasingly intense panic attacks. Eventually, I had to acknowledge that the only choice I had was to transition.

On its face, a gender transition is a fairly simple concept: the trans person picks a new name that better fits their new public identity, picks new pronouns, and changes their outward appearance. But transitioning rarely ever runs as smoothly as it could or should go, and that’s especially true for trans people with children.

After I told my ex-wife I was transitioning, one of the first questions she asked was, “But what would the kids call you?” It was a fair question. The prospect of one of my little girls calling me “daddy” in the middle of a crowded women’s room sounded less than appealing. But before I could even answer, she quickly said, "Well, you can't be 'mom,' because that's me."

I don't believe that going through the birthing process is the only thing that makes a mom a mom.

On an intellectual level, I knew what she meant, but considering how long I'd yearned to be a mother, it still felt like a punch in the gut for me to hear that. I understand why the label “mom” is important for my ex-wife, because to her, "mom" isn’t just a label — it’s an experience. From her very first pregnancy test, to the first time she felt movement in her womb, there’s a special bond that connects her to her children that I would not be able to understand or experience. If I was "mom" too, she felt like I would be encroaching on her sacred bond with our kids.

I certainly didn’t want to erase the role that my then-wife had in birthing our children. Her pregnancies were arduous and her labor overwhelmingly painful. But at the same time, I didn't believe that going through the birthing process is the only thing that makes a mom a mom.

So instead of calling myself "mom," I decided to come up with my own label. Among my trans friends who have kids, there’s a wide range of terms they use. Some prefer to be called "dad," while some are called "mom" along with their co-parent. New York Times best-selling author Jennifer Finney Boylan’s kids call her “maddy," a combination of mommy and daddy, and the main character in Amazon’s Transparent is called “moppa” (though late last season she did express that she wanted a new name). There’s a small but rich tapestry of options for me and my family.

Originally, I was drawn to Boylan’s “maddy,” but my strong-willed 7-year-old daughter had other ideas. “But you’re not mad! Why would I call you maddy?," she asked.

I still get pangs of jealousy when I hear the word “mom."

For a while afterward, my daughter simply avoided labels when referring to me. To anyone observing us, we’d have just looked like any other mom and daughter, but without a label, I felt like some genderless caretaker, not an actual parent. So the day after the Halloween women’s room incident, I sat my daughter down and we workshopped some ideas. After much discussion, she suddenly burst out, “What about ‘Addy’?” It was perfect, and the name stuck.

The thing I’ve grown to like the most about “Addy” is that it doesn’t erase my past history. It doesn’t erase the years I spent chasing my little one around the yard, or the family trip to Disney World we took a few years ago. The truth is, I have a lot of emotions still wrapped in my former identity as a “dad”. But the familial space I occupy now is sort of a mashup of gender roles, and I'm OK with that.

I still get pangs of jealousy when I hear the word “mom," particularly on Mother's Day, when the word is thrown out frequently. But I’ve accepted that the label will never be applied to me, no matter how comforting and maternal I might be with my children. I’m okay with that. I’m not Mom. I'm Addy.