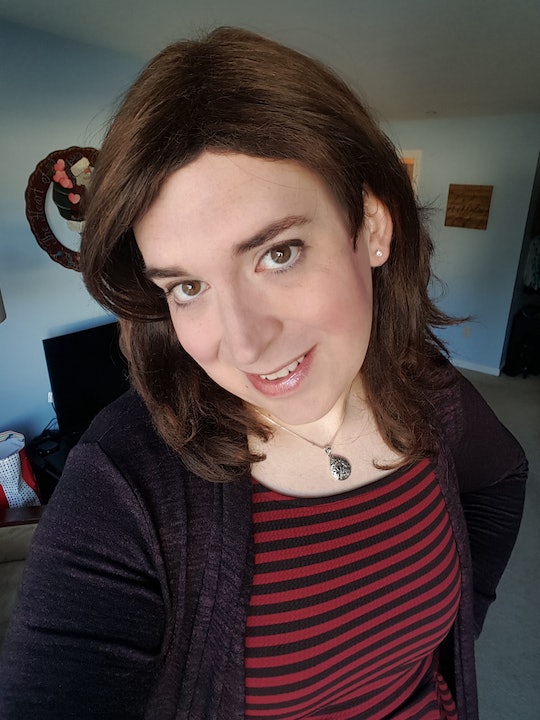 I'm A Trans Mom, & This Was My Style Journey

I stood in the cereal aisle over my 7-year-old, who had picked that moment to start throwing a tantrum. Everyone’s gaze was first drawn to my child, but it quickly shot back to me. My eyeliner was winged. My eyeshadow was impeccable. I had just the right shade of blush on my cheeks. And the hem of my short skirt brushed my mid-thigh. I was a 34-year-old mom who was dressed like an 18-year-old girl going to her first frat party. I had never felt as self-conscious as I did at that moment.

A few weeks later, I was out with my roommate and my former boyfriend and it felt like all eyes were on me. I kept self-consciously checking my makeup in my compact mirror and tugging at the hem of my red and black dress. I felt like I was on display. Finally, I pulled aside my roommate, a trans woman who had transitioned five years earlier, and said: “Everyone keeps staring at me. Maybe I don’t pass as well as I thought I did.”

She looked at me and what I was wearing. It was the same dress I had been wearing during the cereal incident. "Kate, women your age don't wear skirts that short," she gently replied.

She went on to explain that when people looks at me and notice a woman wearing age-inappropriate clothing, they have a tendency to look closer, which increases the chances that they'll realize I'm a transgender woman, thus putting my safety in jeopardy.

A chill ran up my spine. She was right. So when we got home, I hung that dress up in the back of my closet.

There’s a phase that nearly every transgender woman goes through in their transitions called the princess phase, or the baby trans phase. It's similar to the process that preteen cis girls go through when they try to develop their own style by finding clothes that fit with their rapidly changing prepubescent bodies. Like young cis women, older trans women who are on Hormone Replacement Therapy (HRT) are developing in new ways, and they need to learn how to dress for their new bodies. Yet while cis girls figure out their personal style by trial and error, choosing flouncy skirts and tanks one day and flared jeans and peplum tops the next, trans women don't have that luxury. We have to find an age-appropriate style that works for everyday life, and we have to do it quickly.

For me, makeup was like armor. I figured that if I applied it well enough, people wouldn’t be as likely to clock me as a trans woman.

The end result is that a lot of transgender women in the baby trans phase opt for clothes that are excessively youthful, flirty, and feminine. Trans actress Angelica Ross once summed up what being baby trans means on The Daily Show: “When you first transition, you reach for the longest hair, and the shortest skirt.”

My own transition last year was no exception. After a lifetime in the closet, watching other women wearing the things that I could only dream of — cute shoes, sundresses in the summer, skinny jeans tucked into riding boots, and a flannel shirt for fall — it was easy for me to get caught up in exploring my newly found femininity. After a lifetime of just T-shirts and jeans, the new options were intoxicating. I wanted to be perceived by others as the woman that I truly am. I found comfort in stereotypes, so I primarily picked out skirts and dresses.

The other new experience for me was learning how to do my own makeup. While this was initially an intimidating prospect, I eventually learned how to soften my features with a dash of foundation, which gave me confidence and helped relieve my gender dysphoria. I decided early on that eyeliner would be “my thing” and I joked with my coworkers that they knew I meant business when my eyeliner has wings.

For me, makeup was like armor. I figured that if I applied it well enough, people wouldn’t be as likely to clock me as a trans woman. So I’d insist on wearing a full face of makeup before leaving my apartment, much to the chagrin of my then-boyfriend and children. “When are we going to go?” my 7-year-old would whine by the time I got to my eyeshadow.

Every day, I spent about 45 minutes on my makeup routine. The amount of prep time I was devoting to my appearance before I left the house became an annoyance to my kids. My young toddler in particular had a habit of going into a screaming fit right in the middle of me doing my eyeliner. The longer I spent applying eyeliner around her, the more she would scream. I knew something had to change.

It was important for me to find a style that was age-appropriate for a mom of 35, but I didn’t want to sacrifice having fun with my wardrobe in the process. Because I'd never experienced my teens and twenties as a lady, I'd missed out on more youthful or even flirty wardrobe options and it was difficult to accept that I simply couldn’t pull them off while taking care of a first-grader and a toddler in public. But I also didn't want to adopt the standard "momwear" of mom jeans and oversized cardigans. So I set out on a quest to define my own style.

For trans women who transition in adulthood, managing our appearance is a delicate dance.

Transgender women have to strike a delicate balance with their appearances: if we skew toward skirts and dresses, we're perpetuating gender stereotypes, but if we're too androgynous, we have our genders questioned, as if we aren't woman enough. Striking that balance is a perpetual and exhausting struggle. I wanted to be seen as a woman, but I didn't realize that wearing so much makeup and short skirts only made me more visible and out-of-place.

As a feminist, I still believe that women should wear whatever the hell they want. But I also realize that my wardrobe and makeup routine need to be adapted to my demands as a mom, not to mention that the fashion path I was on might have put my safety as a trans woman in jeopardy. So I’ve toned down my makeup, to the point where I'll usually just swipe on some concealer and mascara. I still occasionally go for a more dramatic vibe, but I try to make my makeup appropriate for the activity or event I’ll be attending.

Style-wise, I’m back to T-shirts and jeans, only from the women’s aisle this time. I have a newly discovered love for V-necks that subtly show off a chest that I never had before (thanks, estrogen!). As for that red and black dress? I found a tailor to lengthen it. It’s still short, but not too short, and it’s a fantastic staple to my wardrobe, especially on date night. I’m still slightly more likely to wear a skirt than the other moms at the playground, but it’s no longer an everyday wardrobe staple. (My knees, which are beat up from chasing around my kids, probably thank me for this.)

For trans women who transition in adulthood, managing our appearance is a delicate dance. I’m grateful to my honest and kind-hearted friends who guided me through the process of finding my own style, and of course I'm grateful to my patient children, who almost always respected my time demands. They’re much happier now that I can do my makeup in five minutes, because it gives them more time to play at the park. And at the end of the day, I’m happiest when they’re happy.