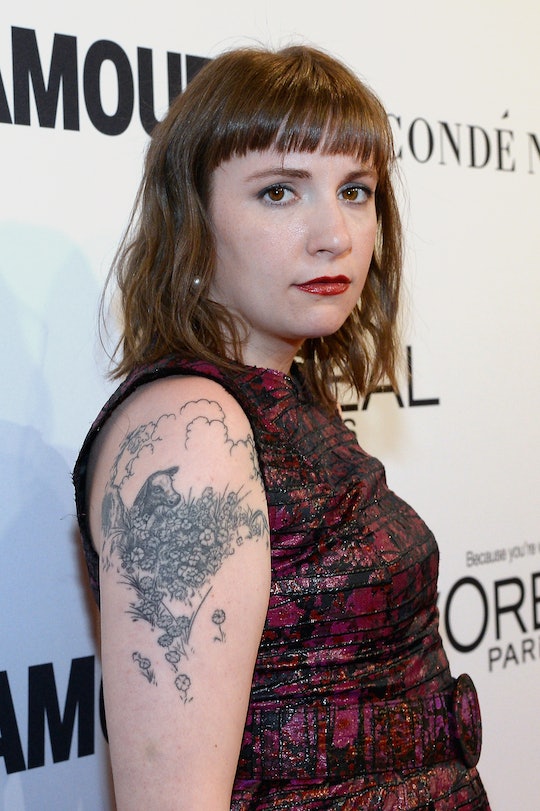 Lena Dunham Got One Thing So, So Wrong About The Reproductive Rights Debate

A few years ago, when I was 22, I had an abortion. After the procedure, I laid on my couch, watched old episodes of The Office, and drifted to sleep. The next day I went to work and started the rest of my life.

My abortion in and of itself was a mundane, routine medical procedure, and I don't think about it that often. However, when Lena Dunham recently said she "wished she had an abortion," I couldn't help but think about my own.

On Dunham's podcast "Women of the Hour," the Girls actress said, "Now I can say that I still haven't had an abortion, but I wish I had." The quote came in the context of Dunham's admission that she had grappled with an internalized abortion stigma and aimed to fight against it. While her comment was ostensibly intended as an attempt to de-stigmatize and normalize abortion, it came off as a flippant dismissal of the procedure, thus prompting backlash on social media

Dunham has since apologized for her comment, saying her words "didn't translate," but the damage has, in my opinion, been done. As a woman who has actually experienced what it's like to have an abortion, Dunham's comments were not only short-sighted, insensitive, and attention-seeking, they were inevitably harmful to the continued fight for reproductive rights. Under the incoming presidential administration, this fight will only become more dire and more important.

I can understand and ultimately appreciate Dunham's intention in attempting to end the stigma of a common, medical procedure. But I cannot understand her lack of empathy, awareness, and true understanding regarding the state of abortion access in this country. Dunham's comments attempted to make the experience of abortion universal, when it is anything but. In essentially saying, "Abortion is no big deal," Dunham is saying, "Abortion is no big deal to me."

For an affluent white woman with privilege, of course procuring an abortion would be "no big deal." Dunham is financially capable of paying for the procedure. She comes from a liberal, progressive family that wouldn't disown her for terminating. And she currently lives in New York City, where abortions are somewhat easily accessible. Most women in this country do not have those luxuries.

My abortion experience was fairly mundane. But that doesn't mean it was universal.

While I was obviously not as wealthy as Dunham when I had my abortion, I was in a somewhat similar position. My abortion was not particularly scarring, nor was it a difficult decision to make. I was in an unhealthy relationship with a man who didn't love me, who drank three six-packs every evening and was sleeping with the neighbor who lived directly above us in our condo complex. I had just graduated college, could barely afford my rent, and was in the middle of a post-baccalaureate teaching program. Having a child wouldn't have just been impossible, it would have been irresponsible. So I made an appointment at the local Planned Parenthood and had an abortion. I didn't miss work. I didn't have to drive hundreds of miles to find someone who would perform an abortion, as is the case in states like Texas or Mississippi. And I had a strong support system in the form of my mom and my best friend.

My abortion experience was fairly mundane. But that doesn't mean it was universal. Thanks to Targeted Regulation Of Abortion Providers (TRAP) laws and pending anti-abortion legislation in states like Ohio, my experience getting a cheap, easily accessible abortion is becoming increasingly uncommon. Women who aren't insured, or an estimated 33 million Americans, still have to pay exorbitant rates for the procedure. Women who live in one of the 35 states that have abortion restrictions, such as mandatory waiting periods, restricted health insurance coverage, or bans on abortions after a certain gestational period, are forced to pay more for their care.

For example, if a mother in Texas chooses to have an abortion, she must drive to 1 of 10 remaining clinics (in either Austin, San Antonio, Dallas, Ft. Worth, and Houston), and wait a mandatory 24 hours before she has her procedure. This unnecessary restriction creates a huge financial burden, as an increase in food, lodging, transportation, and childcare expenses is inevitable. If these unnecessary restrictions increase, only affluent, privileged women like Dunham and myself will be able to afford the reproductive care they need. Dunham can "wish" she had an abortion all she wants, but women in poverty, and predominantly women of color, wish they could afford the abortions they need in order to survive.

Lena Dunham played right into anti-choice advocates' hands by catering to a common stereotype: that every woman who doesn't consider abortion traumatizing is a cold, calculating, heartless human being.

Of course, the potential for emotional distress for women who seek out abortions is another aspect of the abortion process Dunham failed to consider. While a reported 95% of women say they don't regret their abortions at all, for some women it is an emotionally taxing decision, which shouldn't be negated in an attempt to "normalize" a medical procedure. And ultimately, the feelings of a woman who was not profoundly emotionally affected by her abortion, are just as valid as the painful feelings of a woman who struggled with her decision to end her pregnancy.

Taking the time to address the plethora of reactions to an abortion gives women power to own their stories. Sadly, Dunham failed to do that. Instead, she played right into anti-choice advocates' hands by catering to a common stereotype: that every woman who doesn't consider abortion traumatizing is a cold, calculating, heartless human being.

That is, perhaps, what upsets me the most about Dunham's flippant remarks. In the midst of her backlash, people were comparing abortion to "lighting yourself on fire" and "having terminal cancer," metaphors that gave me a chill down my spine. Equating complete bodily autonomy to murder is how the anti-choice advocates thrive, and Dunham has only aided their cause. Now, abortion rights activists are seeing a common, legal medical procedure being equated with potentially life-ending circumstances, which is far too close to dangerous pro-choice rhetoric for my comfort.

So many women have to battle the social stigma surrounding abortion. Frankly, even though I didn't regret my abortion, the stigma is what almost killed me. After my procedure, I was called a "murderer" by conservative friends and was labeled a "slut" and a "whore" by strangers after I chose to write about my experience. I started self-medicating with drugs and alcohol. I dropped out of school. I started showing up to work high or drunk or both. One night, after leaving a bar, I flipped my car driving 30 mph over the speed limit on a dirt road. I had a concussion, a cut on my chest from the seatbelt, and broken ribs.

My abortion didn't lead me to drink and do drugs. It was the social stigma that made me feel worthless, because people were telling me I was. Something tells me that despite her comments, Lena Dunham would not want to experience the backlash so many women face after they make a personal decisions about their bodies.

I can make peace with the good intentions behind Dunham's statement, but intentions won't cut it in 2017. Not with the incoming administration, which has stated on more than one occasion that limiting abortion access is a priority. In fact, since Dunham's remarks, the state of Texas has announced a plan to cut complete funding to Planned Parenthood; a decision that will put more women (and men) at risk. We must all do better if we are to protect reproductive rights, by refusing to paint the experiences of women with such a broad brush.

I didn't have to experience an abortion in states like Ohio, which just passed a 20-week abortion ban, or Florida, which requires a 24 hour mandatory waiting period from the time an appointment is made to the time an abortion is administered, to understand that fighting against these unnecessary restrictions is paramount. And guess what, Lena Dunham? Neither do you.