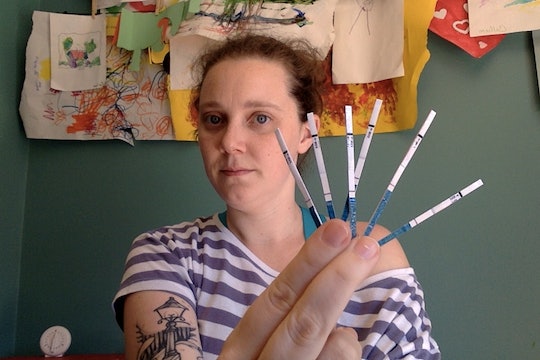 I’m Addicted To Taking Pregnancy Tests, & This Is My Story

Yes, you read that correctly. I am addicted to taking pregnancy tests, but not because I am in any rush to get pregnant. For me, it goes much deeper than faint lines or a positive or a negative. I am no stranger to anxiety. I’m an on-again, off-again sufferer of panic disorder with agoraphobia with a dash of depression and a side of OCD sprinkled in. But through years of therapy and relapses and medication and big life changes, the landscape of my anxiety is constantly shifting. And I recently had a lightbulb moment: Though my panic attacks are few and far between, and my obsession with bathrooms and food is almost non-existent, I still have compulsive behavior. The biggest compulsive quirk I have? Taking lots and lots and lots of pregnancy tests.

A few years ago, I was blissfully ignorant about the fun world of pregnancy tests. Before I was married, I was super careful about birth control. I never had a reason to buy one. Not ever.

I was really healthy when my partner and I decided to try for a baby. I had been panic-attack free for six months, I was off antidepressants, and I felt great! But as anyone who has had a baby or been pregnant or thought about pregnancy knows, anxiety and motherhood go hand in hand.

I was already a master over-analyzer and while trying for a baby was fun (read: lots of sex), it was also nerve-wracking (read: Googling everything and analyzing every bodily sensation). If I am to have one superhuman power, it’s my ability to analyze every physical symptom for hours. Yes, this makes me teeter toward hypochondria, and yes, it’s probably not always the best use of my time or brainpower, but I’m greatly reassured for being so in touch. I like having as much information as possible. It helps me head-off migraines, decide what to eat and, often, it reminds me that I’m actually OK when my anxiety would have me believe otherwise.

One way I eased my nerves was by joining a Trying to Conceive (TTC) group online. There are a lot of acronyms to memorize when you are on a message board for TTC. One such acronym is Pee on a Stick (POAS). Some of the women on the group were self-proclaimed “POAS Addicts.” And I definitely fall into that camp.

Some women will happily wait for their period. If their period doesn’t show up, they may wait a few days, even a week, to take a test. It sort of ensures that once they test, the answer will be definitive.

I’d read some pregnancy tests can tell you if you’re pregnant before you miss a period. And since I was overeager, and because I generally like as much information as possible, I began testing on the earliest possible day. I hadn’t reached the point of obsession yet. I would just take a test, and if I saw it was negative, I’d deem it was still too early and I could take one again the next day.

The true obsession began the first time I got pregnant. That first pregnancy ended in a miscarriage at six weeks. I had known I was pregnant for two weeks before I started bleeding. That’s when I began reading everything I could about human chorionic gonadotropin (hCG), the hormone your body produces once a fertilized egg implants into your uterus. It’s the hormone that pregnancy tests detect. In a healthy pregnancy, your level of hCG doubles every 48 hours. And when you start to miscarry, those numbers begin to drop — fast.

They confirmed my miscarriage by testing my lowering hCG levels. And even though those numbers were pretty definitive, I had some extra tests lying around. As if the bleeding wasn’t real enough, there was something final about taking another test and having it come up negative.

Next time we tried, I began testing even more often than I had the first time. I wanted to know the moment I could know something. And then if I saw a positive, I wanted to see the line get darker and darker, which would mean my hCG levels were going up. (It wasn’t scientific by any means, but it was reassuring nonetheless.)

Every day, I peed on something. (Tests, you guys, I swear.) Finally, the day after my missed period, I got a faint positive. But it was really faint, so I kept on peeing on sticks until it was a super dark line. It made me feel better. It somehow quelled all my pent up post-miscarriage, early-pregnancy anxiety. At least, a little bit. There are so many milestones to look forward to, and you think, “Ah, after this, I’ll stop worrying.” First, it’s the positive pregnancy test, then it’s hearing the heartbeat, then it’s seeing the 10 fingers and toes on the ultrasound, then it’s finally meeting the baby after he’s born.

Any mother knows that once the baby is born, you have a million other things to worry about, too many to list in one place.

When we were trying for our second, I wised up. No, I don’t mean peeing on fewer tests, I mean that now, instead of getting the expensive ones at the drugstore, I stocked up at the dollar store. Saving so much money made me feel a little better about my formerly-expensive habit. Sure, those few moments in between shoveling scads of tests into my basket and paying for them were sort of embarrassing. Hadn’t I laughed out loud the first time I saw that the dollar store sold pregnancy tests?

Then I discovered you could order simple test strips online for cents apiece. Sure, you had to buy them in bulk, but wasn’t I doing that already? Last time I bought some, I bought 50. Fifty! I rationalized doing so meant I could test early and often. I was in a perpetual thought loop of “what if I’m pregnant?” and “what if it’s not too early to test positive?” I got pregnant pretty quickly, after only a couple of months of obsessively taking tests until the minute my period started. Even if I felt like Aunt Flo was on her way, I’d think, “Maybe those cramps are actually a sign of pregnancy,” and so I’d take another test.

A lot of the anxieties around having babies lessened when I became pregnant with my second one. I knew the ropes. My second born’s birth was amazing and easy. She and I both slept really well. I was much more confident in my parenting abilities. A lot of this was because I had done it all before and my first kid had turned out just fine despite a fraught first year. (My panic attacks returned and I, once again, had to be medicated to lower the excruciating anxiety I experienced from almost the moment he was born.) But I also credit going back on meds and staying on a low-dose through pregnancy.

My panic attacks have been held at bay for some time now. Once upon a time, not so long ago, going to the grocery store alone would have terrified me. Now, my agoraphobia is well managed. I can take two small kids to the grocery store or to swim lessons and my anxiety doesn’t even cross my mind.

But a little part of my OCD rears its ugly head every month. My partner and I are a little lax with birth control. If I found out today that I was pregnant again, I’d be happy, albeit anxious. So much is out of your hands when you’re pregnant — and you can’t guarantee answers to every question you have.

Every month, like clockwork, the obsession with knowing if I’m pregnant or not takes over even before my period is due.

I think, “I should maybe just pee on something, just to see.” And, of course, most of the time the tests are clearly negative… or maybe not so clearly, since I have made a career out of obsessing over what appears (or doesn’t appear) on each one. On the sly, I take the tests in the morning and look at them in natural light, and then in my bathroom (where the lighting is better), and then through the lens of a camera.

My husband probably thinks I only take about a third of the tests I actually do because he doesn’t see me, squinty-eyed, intently staring at a tiny strip of paper.

No matter where I take the tests, a faint line is still a line. And my imagination is really good at drawing faint lines. Like, scary good at it. Like, if you handed me a piece of paper with one pink line on it, I could tell you exactly where the second faint line is based on the average spacing on an average test.

There are even apps out there for people like me. My favorite works like this: You upload a picture you’ve taken of your peestick, (or, let’s get real, you upload a couple dozen in varying temperatures of light and taken in different backgrounds) and then you apply different filters. There is even a website you can upload your picture to and people will vote on whether or not you are pregnant. GENIUS! The existence of this app and this website confirms I am not alone. There are other obsessives out there.

I realize my behavior is weird and compulsive. But it’s a far cry from the obsession I used to have with bathrooms or the fear I used to have about leaving the house. So what if I have plastic cups in my bathroom solely just to pee into? So what if, during a certain time of the month, I spend countless minutes examining a thing I peed on? Because after I take a test, and I’ve finally deemed it’s negative, I relax a little. It’s not worth testing again … for at least 24 hours.

Despite knowing it’s weird, I give myself permission to let this quirk slide. Anxiety is a large part of my identity. And that’s OK! I’ve learned a lot from my struggles. I’ve learned to be tough and brave. I’ve learned compassion. Perhaps peeing on so many sticks is a sign my anxiety isn’t totally gone. Perhaps I should spend more time working on it in my therapy sessions.

Maybe I’ve held onto this obsession for so long because there’s sort of a thrill to it. Each time could be the time I find out another kid might join our family. It’s terrifying, but also so exciting. Motherhood is full of so much joy and worry. For me, taking so many pregnancy tests is just a small part of it.

Being a mother has brought on so many changes, and sometimes all I can do is ride the wave and do the best I can. I love my children and my new life, even if it means new worries and a lot less sleep. In a lot of ways, focusing my emotional energy on them has been helpful. My anxieties don’t prevent me from caring and nurturing them, so when a little quirk (like my obsession with pregnancy tests) pops up, I don’t sweat it. I try to love myself the best way I can. Accepting my quirks and anxiety is part of that.

My kids love me, flaws and all. If they can do that, then so can I.