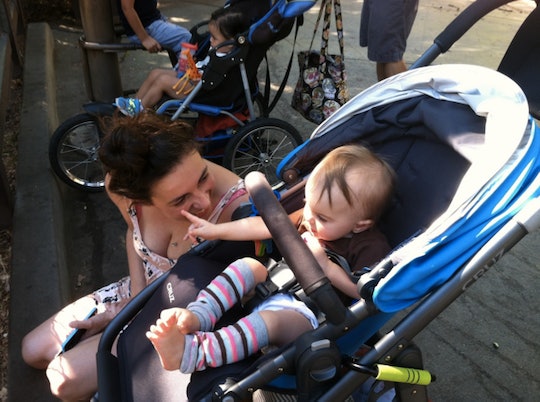 I'm Breastfeeding With Large Breasts, & Here's How Nursing My Daughter Has Changed How I View My Body

The transformation from woman to mother has been similar to the transformation of my body, particularly my breasts, from pre-pregnancy to breastfeeding. It’s been a change I cannot control, and my acceptance of my new, evolving body is similar to my acceptance of the myriad of changes in my life that’ve happened since becoming a parent. Getting through the writing of this essay was difficult for me, much like breastfeeding with large breasts has been difficult for me. My breasts and I are not buddies. Never been, never will be. We’ve never had late night talks over tea, and we don’t chuckle at romantic comedies together. We’ve been to countless dinner and movie dates, but not because we were each other’s first choice. I’ve never shared a glass of red wine with my breasts. To be totally honest: I’ve always felt a real disconnect between me and them.

My breasts have always been large. I was ashamed of them as a preteen. My boobs were a size D but most people thought I was flat. That’s how deeply I slouched. I did everything I could to avoid showing them. I wore baggy shirts, vests, jean jackets, super-tight (read: way too small) sports bras, layers, layers, and more layers. I was never a woman who proudly flaunted her breasts. Instead I curled into myself, willing them to disappear.

But no matter how I tried, they would still get noticed. As a teen, I had television producers tell me to be proud of my body. It came from a good place but it only made me want to hide more. A headshot photographer told me I would be “good at playing girls that get in trouble,” mainly because my boobs were large and I was small. I was 15. A film director I worked with once physically grabbed my shoulders, yanked them backwards and told me to stand up straight. Be proud, he said. I hadn’t graduated high school yet. These people (who offer only a preview of what I endured from countless others) felt they had a right to comment on my body and the way I carried it. They treated their comments as if they were giving me some type of gift — a gift I’d never asked for, a gift I never wanted. They understood my body, so why couldn’t I? They knew what my “best” features were, so what was my problem?

In my early 20s, I lost as much weight as I could, hoping my breasts would disappear. (I also thought the only way to be an actress was to be underweight.) These two life obsessions fed each other eagerly. But no matter what I did, my D-cup breasts were still there, a part of me I had so much trouble accepting.

Society has a difficult time accepting breasts as well. Some feel breasts need to be controlled or covered. Others think they need to be experienced and exposed. Both seem to view breasts only as something sexual, and also as something disconnected from a woman, the person to whom they belong. But breasts are not just about sex, very much like women are not just about sex. Exposure does not mean freedom. Covering up does not equal righteousness. It only serves to perpetuate the idea that the female form needs to be controlled. It’s always a discussion of what should be or shouldn’t be rather than an acceptance of what is.

I was exposed to those ideas about women’s bodies for so long that I believed them. I came to see my breasts as, at best, recreational, decorative, and occasionally inconvenient. And then I had a daughter. Now my breasts are two of the most useful things in my entire home. They nurture, feed, and comfort her as she grows.

My breasts have become larger to accommodate my new role. It isn’t a job in a movie or as a film star. My new role is mother. And it’s the most important role I’ve ever had. My breasts, like my new “job,” are much larger than I ever imagined they could ever be. They were like the introduction of my child to my life: they literally came out of nowhere and are now such a part of my daily routine. My day-to-day is consumed by caring for my daughter, playing with her, enjoying her, and feeding her. From my breasts.

Society deems how they use our breasts. We even view breastfeeding in public “controversial”. It’s been under such hot debate in some circles that there had to be laws written to protect a woman’s right to breastfeed wherever and whenever she needs to. Let me repeat: There are laws that exist for the sole purpose of protecting a woman’s right to feed her child in public. That’s how afraid people are of breasts.

I am a mother. These days, my breasts are the officially sanctioned territory of my daughter. Most nights I wake up to her cries, stumble into her nursery, and hold her close until she settles. Everything about me is a little softer, a little different, and a little further from what I once imagined my life would look like. My breasts have new purpose: They feed, sustain, and nourish my daughter. I feel happy and proud of them and the things they’ve done, the things they are doing and the things they will do. And as I accept my changing breasts, I’m learning to accept the changes in my body and my life, too. Maybe I am finally moving away from the constrictions of how other people perceive me. Maybe I’m finally seeing myself. Maybe I am accepting what I see.

I now notice people look me over in public, and their behavior bothers me much less than it ever did before. Yes, my breasts are big. But they feed my daughter. And she grows by the day — by the hour.

I hope she grows up into a world where women don’t feel judged, ogled, or ignored because they have big boobs, small boobs, one boob, exposed boobs, covered boobs, no boobs, enhanced boobs, or Photoshopped boobs. It is not a woman’s job to make people feel comfortable with her body. The world is much bigger than the black and white labels slapped onto the female body. And so are my breasts.

More Like This
Festive Mommy & Me Holiday Nail Ideas To Try
101 Advent Calendar Activities, From Books To Read To Cookies To Bake
The 4 Main Parenting Styles & Which Is Best For Kids
The 35 Top Toys For 3-Year-Olds