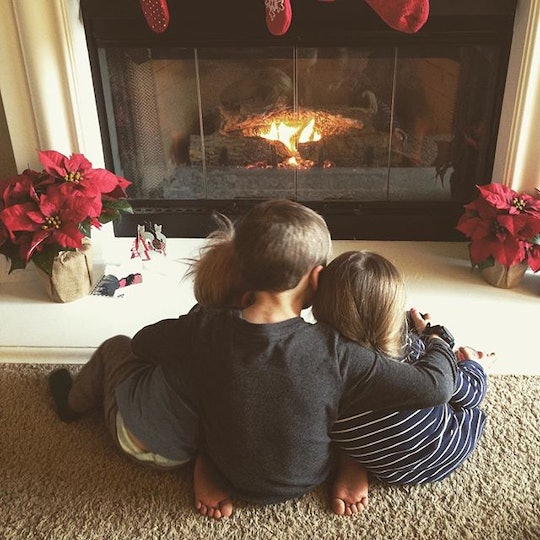 I'm So Worried My Kids Will Inherit My Anxiety

As a kid, I remember being anxious whenever I was in the car. I would constantly tell my parents to slow down, even if they weren’t going particularly fast. I would spend trips up to my grandparents’ house praying for our safety, because a long section of road was close to hills and cliffs. I imagined our car tumbling off the edge, over and over again. I imagined it so often that it became a recurring nightmare, one which I still occasionally have as an adult.

I always assumed my anxiety was something I would outgrow, like my fear of monsters in the closet. Over the years, it has waxed and waned, but it has never entirely disappeared. When I became a mother, my anxiety became an entirely different beast. Since the birth of my first son, I felt that I was always on the verge of losing him, a fear that evolved into an obsession. My anxiety grew as he did, becoming bigger and more powerful.

Now, I'm determined not to pass my anxiety issues to my kids, but to be honest, it's not going well.

I first realized my anxiety was a huge issue right after my son was born. I knew I had postpartum depression, but my postpartum anxiety was even worse. I wouldn’t let him sleep because I was constantly afraid of him dying. I couldn’t let him nap without putting a hand on his chest or beneath his nose every fifteen minutes or so, just to make sure he was breathing. If his breath was too shallow or I was unsure, I would shake him awake. By the time he would rouse seconds later, I would be sobbing with fear.

The idea of a gunman storming my son's classroom lurked in the back of my mind. The scenario played in my head so often that it almost became real.

When I drove with my son in the car, I would frequently pull over in a panic, always convinced he was dead if he didn’t respond to me right away. Even after I installed a mirror that allowed me to see him from the driver’s seat, I could never tell the difference between him sleeping and him being unconscious or worse. I confused the former for the latter often, and it left my nerves completely frayed.

A month or so after Sandy Hook, I found myself calling my son’s preschool during a bout of hysteria, certain in my gut that there was something wrong. When I asked if he was OK, the receptionist was kind to me, but she didn’t seem to understand why I had called. To be honest, neither did I. He went to a school that required two passcodes just to get through the door, yet the idea of a gunman storming his classroom lurked in the back of my mind. Much like my childhood fear of my car falling off the edge of a cliff, the scenario played in my head so often that it almost became real.

When my son was born, I was haunted by stories of mothers who lost their babies to furniture that wasn’t secured to walls, or babies who were found suffocated while bedsharing or run over in the parking lot by a careless driver. These stories constantly ran through my head, prompting me to react inappropriately when I see my kids doing something dangerous.

I once found my daughter using her dresser as a set of stairs to get to the cat. Her dresser was the MALM dresser from IKEA, which had killed three children by tipping over and falling on them. I had secured it to the wall weeks earlier, but I was filled with anxious rage. "You could have died," I told her, screaming and wild-eyed.

I don’t want my kids to inherit my anxiety, but part of me already fears it’s too late.

I am not currently in therapy, but I do feel like I've started to take control over my anxiety. I don’t want them to inherit my anxiety, but part of me already fears it’s too late. My son is afraid of monsters in his closet. He is afraid of going too fast in the car. He is scared of getting sick and people dying and that someday our house might burn down.

When he tells me his fears, I say that these things won’t happen. That monsters don’t exist. That I will drive him safely to wherever we are going. That I can stop the house from burning down. That I can promise he will not die on my watch. But he’s not convinced, and neither am I. Because I’m still scared of these things, too.

If you struggle with anxiety or depression, please seek professional help or call 1-800-826-3632.