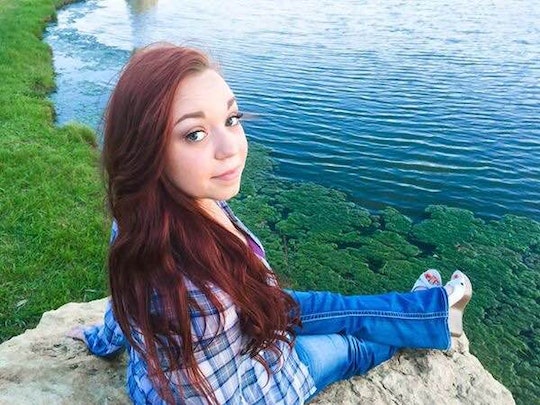 I'm From Texas, & This Is What I Had To Do To Get An Abortion

I was one week away from turning 22 and just five months shy of finishing my undergrad degree when I knew. I hadn’t taken a test or even missed a period yet, but I just knew. I was pregnant. I can’t explain how I did, but I did. I was on the same birth control I’d trusted for years and with the same partner. I didn’t think it was possible, but still, I knew just the same. I was pregnant, and I wanted an abortion. All throughout Texas, researchers have found that more than 100,000 women have tried at-home abortions. I'm from Wichita Falls, but I'm thankful I never had to make that choice. Instead I had to cross state lines to end my unwanted pregnancy.

Sure enough, a home pregnancy test only verified my intuition. I thought I would panic, but I didn’t. I was calm. Collected. Resolved. In my mind, there was never a choice to make. I knew that I couldn’t have a full-term pregnancy (much less a baby) and be able to meet the demands of my undergrad program. I'd have to drop out. Not finishing college on time was not an option. Finishing later was not an option. Graduating college had been my dream. I didn't want to change my plans. And luckily, because I am a woman living in country where abortion is legal, I didn't have to.

I was fortunate enough to have a partner I could trust, and it didn’t feel right to not let him in on the decision making process. He was as kind and supportive as any free-thinking woman could hope for. He wasn’t ready to be a parent either, but he let me know that the choice was mine, and that he’d support me no matter what I chose. I’ll always love him for that. I never wavered. Together we immediately started researching. And then we made our choice. I would have an abortion.

But our choice would only take us so far.

In Texas, a woman’s options are limited when it comes to terminating a pregnancy. Our decisions are constrained. Our bodies policed by policy. And as much as I love the Lone Star State, I ran into one strategic roadblock after another after I'd made the choice to get an abortion. Wichita Falls offered no abortion services, which meant I'd have to look elsewhere. I'd have to go elsewhere to get the treatment and the services I needed to make the responsible choice for my body.

Unlike many other women, I could afford travel, so I thought I would just go somewhere else in Texas. I thought that it would only take a few hours in the car to get the procedure I needed, one that would make possible my plan for my own future. But I was wrong.

Most clinics in Texas would only accept me as a patient if I was a permanent resident of that county. If I was somehow lucky enough to find a clinic that would accept me non-locally, the stipulations put in place by House Bill 2 (signed by Gov. Rick Perry in July of 2013) were outrageous.

In spite of all the clamor against late-term abortions, two clinics told me that I was “not pregnant enough” — I had to be no less than six weeks, but no more than nine to 12 — to get an abortion. I was only four weeks along.

Medicated abortions (early, non-surgical abortions induced by medication) required seeing the same doctor a minimum of four times before an abortion appointment could be made. The first visit requires that you receive a sonogram, be shown the image, and have it described to you. State law also requires that a physician give any abortion-seeking woman state-mandated information about medical risks, adoption alternatives, and developmental stages of the human fetus. Beginning November 1, 2013, all doctors administering abortions in Texas are required to have admitting privileges at a hospital within 30 miles of their clinic, and in September 2014, all abortion clinics had to meet requirements for Ambulatory Surgical Centers. Clinics offering abortions also need to be licensed by the staff of the Facility Licensing Group of the Texas Department of Health and Human Services.

By the end of 2013 about one third of the abortion clinics across state had closed. By the end of 2014, there were only six clinics left in all of Texas; a state that covers 268,820 square miles and is home to over 27 million people.

When the reality set in that I could not feasibly have abortion in my home state, an overwhelming combination of anger, betrayal, and defeat washed over me.

My government had succeeded, taking away my power over my body and my safety. The government designed to protect me had rendered me powerless when it came to my own body. I felt that my right over my body was undermined and betrayed by officials who'd never even met me. They'd never see me, never hear my story, and never lay eyes on the child that they were cornering me into having. They wouldn't have to afford sitters and daycare. They wouldn't have to wonder how I would work, care for a child, graduate college, get a job. It was like being violated by a faceless, nameless figure. A figure elected by your friends and family into a position of power over you. It was devastating.

In a last ditch effort, I decided to turn to my closest neighboring state, one I could feasibly drive to and back from: Oklahoma. I thought that my Northern neighbors would likely have even stricter laws than Texas, but I was wrong. When I called the closest Oklahoma clinic, they told me that I was not only accepted, but that I would be safe, welcomed, and supported in their care. I cried tears of relief.

The rights and the future that I'd felt had been taken away from me were suddenly gifted back, not only to me, but to my unborn.

They gave me the gift of being the best mother I possibly could, by choosing not to be one yet.

My partner at the time was adopted when he was 10 days old, and he’d shared with me the pains and troubles that he felt about being given up for adoption. I grew up in poverty, raised by people who loved me, but did not want me, and could not care for me. My right to choose meant that my child would never know the pains that we'd endured.

My appointment was five days later. It was a foggy, cold Tuesday. I had to leave my house at 3:30 a.m. to make my 10 a.m. appointment. I went alone. It wasn’t hard, and I wasn’t afraid. I was so certain I was doing the right thing. The necessary thing. It was simple. Unlike many women forced to cross picket lines into cold, dirty, understaffed clinics full of bitter unwelcoming faces, I could not have asked for a gentler experience. The clinic was quiet, dim, and serene. The staff was kind and thorough. Just as the lady on the phone had promised, I was welcomed, supported, and treated with gentle kindness and respect.

Making the choice to have an abortion was the smartest decisions I've made so far in my life. I stand firmly in acceptance and gratitude for the experience that continues to connect me with other incredible men and women who've done (or will do) the same. I know that I didn't end a life; I began one. And I will be a voice of strength and hope for those still finding their bravery.

More Like This
A Teen Was Body-Shamed By Matt Gaetz. She Raised Over $700,000 For Abortion Funds.
60 Instagram Captions For International Cat Day
Yellowstone's Kelly Reilly Has A Much More "Content" Married Life Than Beth Dutton
6 Mindfulness Activities For Kids