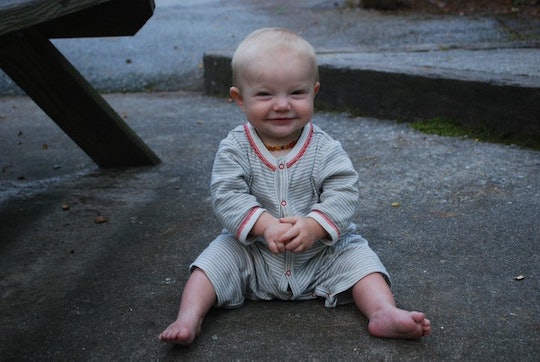 When I was pregnant, we figured our babies would sleep in a crib. Beyond that, we didn't have a plan for sleep training, other than that they'd sleep eventually. As we read more about attachment parenting, we realized we wanted to do a modified form of co-sleeping, with baby sleeping in a crib sidecarred to our bed. But one thing we never considered was Cry It Out (CIO), or the process of letting your baby cry themselves to sleep or "self soothe." It never occurred to us. It seemed mean, and all the research I'd read said that it disrupted attachment and hurt breastfeeding. And honestly, I'm glad we never used it.

I know some parents who decide their kid should CIO at 6 months. Or 9 months. Or 12 months. I’m personally against extinction-training methods, or just shutting the door and letting the baby scream himself to sleep, which have been found to negatively affect mother-baby synchrony, or the link “that helps mothers soothe babies when they’re upset, the link associated with attachment status," according to a study in the journal Early Human Development.

Most parents, however, don’t use extinction methods. Instead, they use graduated extinction, popularly known as Ferberizing. Under the Ferber method, the parent doesn’t leave the infant to cry indefinitely; they go in to soothe the baby at timed intervals. Whether or not this causes the same rise in infant cortisol levels, and subsequent dissociation of cortisol rise with behavior, isn’t yet known. But we didn't think that we could risk it. Regardless of cortisol levels and attachment issues, we couldn’t leave our sons to cry - it would have been cruel, in part because our babies struggled with serious health issues. All of them suffered from severe reflux as babies, and we thought that to leave them to cry it out would have exacerbated their pain.

The pediatrician diagnosed them all with reflux, which occurs to some degree in more than half of infants. Reflux happens when food and stomach acid pass upward through the pyloric valve and into the esophagus. Because the stomach acid is, well, acidic, it burns and erodes the delicate tissue of the esophagus.

Blaise, my oldest, began to suffer from reflux the night he was born, when he screamed inconsolably for hours. My other sons suffered from it as well, though not as early. They cried and cried over and over, every time they ate, while they ate, after they ate. Only a few things helped. They could breastfeed, which often helped neutralize the acid, while the sucking motion comforted them. We could give them medication, which all of them took, but none of it worked quite as well as it should have. My husband could hold them in a football hold and jostle them, or I could hold them upright in a baby wrap.

Letting Blaise cry it out would have been cruel. He’d have laid on the flat surface of a crib, which would have let the acid in his stomach splash up into his esophagus. Then he would have cried, which always made his reflux worse.

But the key to comfort was having their heads higher than their bodies. That kept the acid down in their stomachs from splashing up into their esophaguses. The doctor didn't need to tell us this; we figured it out on our own. Because of this, we learned our boys needed to co-sleep or they use a crib wedge, which we weren't willing to do. So when I slept with my babies, I slept with their heads resting almost on my shoulder, and their bodies curled against me. Doing so kept their heads raised up. None of my sons ever woke from reflux, even though they breastfed through the night, because they slept partially upright.

We often put Blaise down in his swing for the night, and brought him into bed when he woke. The swing kept him upright, and the motion soothed him. But you’re not supposed to let babies sleep in swings: there’s a danger that their chin could drop down against their chest, obstructing their airway and possibly causing suffocation. It’s not a good solution. Blaise was also almost diagnosed as failure-to-thrive, which happens when height and weight fall below the third to fifth percentile — partially because of the reflux, which made him reluctant to eat. Our doctor suggested co-sleeping as a way to get more nutrients into him, because that way he could breastfeed all night.

Most people I know who did CIO needed less than five minutes for the crying part to stop. My sons would have wailed for hours because they were in pain, and they wanted the pain to stop.

Letting Blaise cry it out would have been cruel. He’d have laid on the flat surface of a crib, which would have let the acid in his stomach splash up into his esophagus. Then he would have cried, which always made his reflux worse. To be honest, we spent a lot of time trying to keep him from crying, because once he started, it rarely stopped. The crying gave him reflux, which made him cry, which made the reflux worse, all until he was screaming and choking.

My other sons had the same issues. Because we got them on reflux medication earlier, they were never in danger of becoming failure to thrive. But they did have the scream-reflux-scream cycle, and to lay them down on their backs in a safe-sleep position would have been cruel. Moreover, it wouldn’t have worked: they wouldn’t have stopped crying. Most people I know who did CIO needed less than five minutes for the crying part to stop. My sons would have wailed for hours because they were in pain, and they wanted the pain to stop.

So while CIO may work for some families, it wouldn’t have worked for us. And frankly, I’m glad. As an attachment parent I used to be totally against it, but even though I now know that it’s necessary for some families to work well, it would have been cruel for my sons due to their specific health issues. As a mom, I’m glad we didn’t reach that point. Co-sleeping worked better for us, and I’m happy about that.