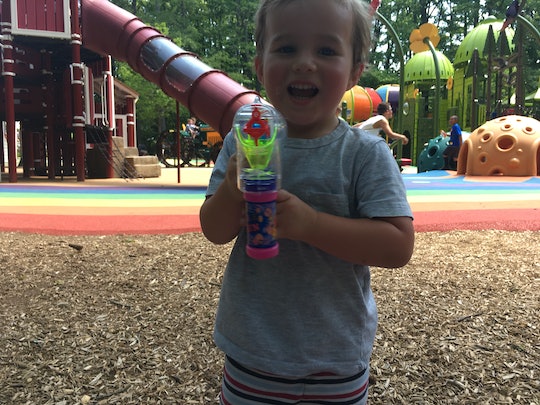 Having A Toddler Totally Sucks

Last weekend, one of my friends came over to join our family for hot dogs and margaritas. As the mom of two kids, including a toddler who's going through the terrible twos, I knew from the start that having a friend over for dinner would probably test my patience. But because it was important to me to catch up with my friend, and she was gracious enough to offer to come over, I just crossed my fingers and hoped for the best.

After dinner, I brought the kids down to the basement to watch a movie, while we stayed upstairs to chat over margaritas. We were alone together for exactly four minutes before my toddler son burst open the basement door and decided it was time to play basketball. The rest of the evening involved him pulling food out of the fridge and throwing it on the floor, followed by him trying to ride the dog. It ended with an epic floor poop that took half an hour to clean up.

Before she left, my friend told me, “I’m surprised you could even pay attention to what I was saying at all with everything that was going on.” At that point, I realized that I’d become totally desensitized to my son's behavior. His rambunctious toddler stage has become my new normal.

My toddler is almost 3 years old. It's a super adorable age, but every second of my life is just chaos. He thinks time-outs are hilarious, as is causing bodily injury to others. I'm constantly cleaning up after him, or explaining to him why he can't do something. But disciplining a kid who doesn’t quite get why his behavior is wrong in the first place is challenging. In fact, it only seems to make him laugh, kick, and bite harder.

I'm starting to feel a bit like a hostage in my own home, because I’m constantly tiptoeing around and trying not to set him off.

To an extent, I expected this. I have an older daughter who went through her own wild toddler stage years ago. At the time, dealing with her was so difficult that I swore off having more kids. But her rambunctious phase was only temporary, and I know this will be too. I know my son won’t always be quite so devious, so instead of driving myself crazy with unrealistic expectations about his behavior, I take a bunch of deep breaths and tell myself, "This too shall pass.” At least, it better pass.

While the infant stage totally has its struggles, in my experience the toddler stage is a lot harder. You can’t just stick them in a bouncer or put them to bed. You spend your days trying to reason with a tyrant, and I'm starting to feel a bit like a hostage in my own home. I’m constantly tiptoeing around and trying not to set him off, while surreptitiously Googling things like “are toddler straightjackets an appropriate way to get through family dinners?”

The toddler stage is all about picking your battles.

Every interaction I have with my toddler is a negotiation. For instance, when I get him dressed in the morning, I am met with constant resistance, no matter how many options I provide for him. Even if he picks out his own shirt (which is usually something involving Batman), a few minutes later he deems his outfit completely unacceptable and we have to start all over again. In most cases, I tell him, “This is the shirt you picked and it’s staying on.” But honestly, sometimes, it is so not worth the tantrum, so there are usually at least five outfit changes before we make it out of the house. Because the toddler stage is all about picking your battles.

While my son might be a handful, he has his moments of sweetness. He loves his sister dearly, and when they aren’t pulling each other’s hair out, they are usually snuggled up or playing together. He hugs me super tight and kisses me 100 times a day. For all of his naughtiness, he has twice as much sweetness in his little heart. Watching him grow and learn is endlessly fascinating. He’s a little bit different every day, and it’s amazing to witness the little boy my baby is becoming.

The toddler stage is a beast, but I’ve gotten through it before, and I know that in the grand scheme of things, it will be short-lived.

The toddler stage is ridiculously hard for so many reasons, and truth be told, I’ll be glad when we’re out of tiny dictator mode and into the age where he can pick his own clothes out without throwing a fit. I’ll definitely save money on cleaning supplies when we master this potty training thing, too.

But right now, I’m riding the waves of epic toddler emo meltdowns and reminding myself that soon they will subside. The toddler stage is a beast, but I’ve gotten through it before, and I know that in the grand scheme of things, it will be short-lived. In the meantime, I’m holding on tight to my sanity and picking out new rugs on Amazon. Because I just know they’ll be more floor poops to come.