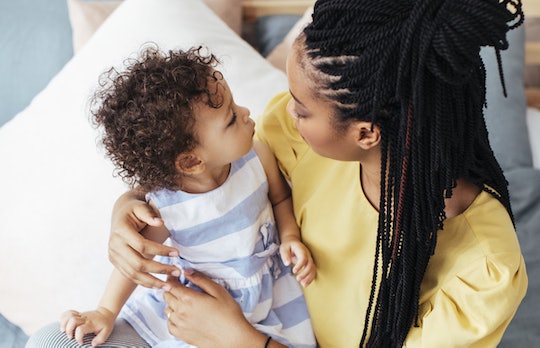 I'm Just Gonna Say It: Bed-Sharing Is The Worst Parenting Decision I Ever Made

I bet your doctor has very strong feelings about bed-sharing. So did mine, but my newborn son, who was nursing around the clock, seemed to feel very strongly about snuggling next to me as he dozed. Both were experts in their domain (being a pediatrician; being a baby), and both had valid opinions. ¯\_(ツ)_/¯ I kept my first three babies in cribs, but by the time I had my fourth, bed-sharing and co-sleeping arrangements like bed-side bassinets were more widespread. The benefits of co-sleeping with a baby were being touted by researchers, though the research was stacked against bed-sharing. The exhausting cycle of breastfeeding a newborn led me to bed-share initially, and by the time we had introduced supplementing and it was no longer necessary to keep my son by my side constantly, I began to seriously regret it.

To be clear, bed-sharing is associated with a much higher risk of SIDS, according to the American Association of Pediatrics (AAP), and room-sharing — officially termed "co-sleeping" — is associated with a rise in unsafe sleep practices. At the same time, co-sleeping — again, where you sleep in the same room as your baby, though not in the same bed — is recommended for the first six months of your baby's life per the AAP safe sleep guidelines, and shown to reduce the risk of SIDS by 50% (AAP). So, you are supposed to sleep in the same room as your kid because it's safer, but that statistically leads to just bringing your kid into your bed, which is bad. Breastfeeding reduces the risk of SIDS, but is also associated with a higher incidence of bed-sharing (a no-no). What is a mom to do?

When we first brought home my son Kai from the hospital, I was breastfeeding exclusively. He hadn't had a bottle and I loved having him right next to me in bed so I could nurse around the clock. He would sleep for an hour, wake up, nurse, then go back to sleep, repeat. Later, when I'd stopped breastfeeding and decided to give him formula, having him next to me wasn't as much as a necessity, but I still did it. His sleep seemed pegged to having me there to soothe him. We began relying on his baby swing to soothe him to sleep and keep him asleep longer.

There were times when we'd let him fall asleep in his swing around 8:30 p.m., then once I'd go to bed, I would get him out of the swing and bring him to bed with me. We have a king-sized bed, so there was plenty of room for me, baby Kai, and my husband. Sometimes I'd have him in my arm, lying there and then slowly pull my arm from under him. He would then scoot over a little and get comfortable. I made sure he was on his back, with no pillows or blankets around him. Once my husband got into bed, I was a little scared. I knew I could be aware of where the baby was and that he was in bed with us at all times, but I wasn't sure if that was motherly instinct or not. Also, my husband sleeps so heavily. We live in Los Angeles, and I joke that he could sleep through an earthquake. In sum, the evidence was stacked firmly against bed-sharing, but on the other hand, this face:

Bed-sharing felt natural to me. I wasn't constantly getting up to check on Kai to see if he was breathing. I could feel him next to me, hear him breathing in and out. If he needed me, I was right there. Also, I could kiss him anytime I felt the need. I would awaken to his little finger trying to go into my nose, or him saying "mama mama." I'd open my eyes to a smiling little adorable face.

Still, once Kai started rolling over, I became more worried about him encroaching on my husband during sleep. Online, some people suggested putting the baby on the outside of the bed, and just keeping your arm around them as they snooze — my friend who bed-shared with her daughter said she'd done this. So I tried it. I rocked him to sleep, then put him down in the bed next to me, on his back, sans blankets. Worrying about keeping my arm around him to prevent him from rolling off the bed meant I didn't get a wink of sleep that night.

The broken sleep made it hard to get my three older kids ready for school. My bed-share-fanatic friend promised it would get easier, but I began to think bed sharing just wasn't for me. Maybe it worked for some families and some moms truly enjoyed it, but the risk calculation had tipped for us.

When I had my daughters, I was warned not to hold them too much or they would get "spoiled." I was told not to put them in bed with me because then I'd "never be able to get them out." I was also told that it was OK to let them cry it out in a crib and that was the only way they'd learn to fall asleep by themselves. None of that ever felt right. I let my oldest daughter Anneka "cry it out" once in her crib. I'm sure it hurt me more than it hurt her. With my twin daughters, Mia and Laila, I really didn't have much of a choice, as I couldn't hold both as they slept for very long. They slept in their cribs from day one, comfortably for a few hours at a time.

It can be hard to balance your gut instincts with the advice of doctors. I understand that research doesn't support bed-sharing, but a large number of mothers out there believe that it's the best choice for their families, especially for mothers who choose to breastfeed. After trying co-sleeping on and off for months, I ultimately decided that it wasn't for us. If the initial calculation was that it would let us all get more sleep, that was certainly not the case by the time Kai was mobile and a nonstop worry for me. At that point, I was getting no sleep. Further, I worried that he had missed out on learning to self-soothe, stationed beside me for all those months.

Today, Kai sleeps in his crib, only waking up occasionally for a bottle. Once he's in his crib, he stretches out and gets comfortable. As a mom of four, I get the instinct to hold your kids close, but the crib feels like the safest space for Kai.