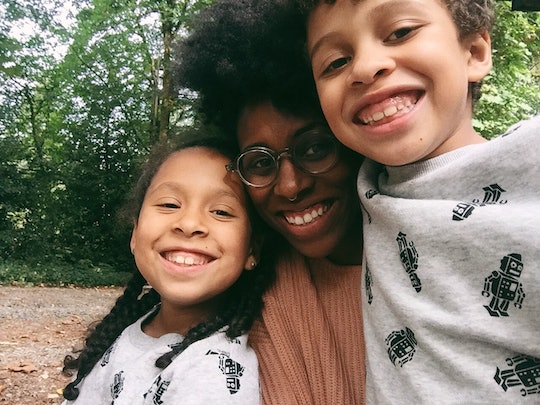 I'm Non-Binary, & Here's How I Explain It To My Kids

Last year, I came out to my children as non-binary, which means that my gender identity doesn't fall within our current socially accepted gender binary of two genders: male and female. My pronouns are they/them, not she/her. It's not because I don't think that gender exists or that it doesn't matter. I think that it exists for some, and that it definitely matters for those people. But I also think that our identities are not limited to the two gender options that we've all been presented with.

Growing up, I never thought the gender binary quite made sense. When I was 7 years old, I was obsessed with dolls and dresses, but I also wanted to shop in the boys' section. I didn't understand why my gender was decided by doctors, my parents, and the world surrounding me. Despite not having the language to describe how I felt and how I viewed myself, I knew that I was uncomfortable with being placed in a box marked "girl," all because of what was between my legs. I promised myself that once I became an adult, I could exist and live as both a woman and a man, because adults had the power to be whoever they wanted to be.

My children were among the first people I came out to. I consider them two of my closest friends, and it was important to me to teach them that even though their parent is an adult, I am still learning about myself. I want to serve as an example to them as they grow into their own people.

While I was coming out to my children, I posed a question to them: "Who do you feel like you are? Aside from your interests and likes, what does your brain tell you? Are you a girl or boy?"

My son's response was quick and strong: "I'M A BOY! I feel and know this," he told me. My daughter was slower to respond, pausing to think about her response. Then she said, "I think that I feel like a girl. Do I have to know right now?"

I smiled. "No, it's not something that has to remain stationary," I said. "It can be fluid. Like my identity is."

I never believed that it was important to build up a world for my children around "F" or "M" markers. That didn't seem fair to them.

When I think about my own experience with gender, I often think back to when I was pregnant, when the questions surrounding my pregnancies were always the same: "When are you due?" "Are you excited?" "Do you know if you're having a boy or girl?" There was such an emphasis on the gender of my unborn children. It always made me cringe a bit, and I'd say, "I don't care about the sex of the baby, as long as they're healthy." Folks would laugh off that response, and demand that I be honest about what I really wanted. But I was being honest.

When my kids were born, I never believed that it was important to build up a world for my children around "F" or "M" markers. That didn't seem fair to them. It didn't seem like it gave them an opportunity to be their truest selves. It didn't give them the time to move throughout the world simply as themselves, before figuring out if gender was for them, or if it wasn't.

I didn't have the language or the knowledge of gender identity politics at the time, so these ideas felt foreign and difficult to tackle on my own. But slowly, I've been trying to introduce them to my children.

The home I've built for and with my children is unrecognizable in comparison to the home that I grew up in. In my home, my brother was instructed to be a gentleman, while my sister and I were told to sit like ladies, to speak like one, to follow a man once we were married. It felt very contradictory to hear that as a child assigned female at birth, I could do anything a boy could do, but I also needed to remember my place, to respect boys and men, and to always be a lady.

"Gender is not something that has to remain stationary," I said. "It can be fluid. Like my identity is."

In my home now, those statements are never spoken. We never consider gender when we talk about the chores that need to get done around the house, or when we speak to each other during an argument. If we do talk about our gender or lack of gender, it's simply when we are sitting around the dinner table talking about ourselves.

As a parent who came to understand what gender meant to them later in life, I'm relieved that my children are aware of their own bodies and their own understanding of gender at a young age. I don't doubt that they face societal influences and gendered expectations, but I know that the place that is safest for them, our home, is where they are allowed to be and exist as themselves. They're in the process of forming their own senses of selves, and I'm validating them as often as possible.

My daughter has always believed that multiple things can exist at once, that complexity is just apart of being a person. When presented with options, such as food or toys, she would always look at me and say "both," or "all", even when I insisted that there was only one option. Now, I thank my child for reminding me of something I somehow always knew, but couldn't put into words or action. The gender binary isn't for me.