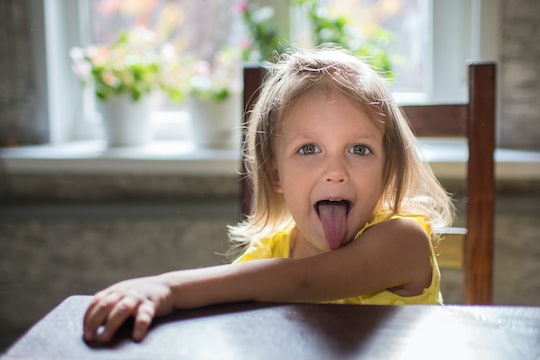 Calling Daughters "Sweetie" Is Archaic & Sexist AF, So I Won't Be Doing It

Much has been made of the horrors of calling girls “princess,” but the alternative many of us use has a much more insidious effect. While perhaps not as sickeningly saccharine as giving your daughter the royal treatment, the word “sweetie” is dripping with problems. It’s something I’ve decided to drop from our daily conversations, and you should think about it, too. Here’s why you should stop calling your daughter “sweetie.”

It might seem silly at first that a harmless term of endearment could be damaging to our girls, but hear me out. My problem with “sweetie” is that it both assigns a label and suggests our affection is somehow tied to our girls’ disposition. I don’t love my daughter one iota less when she’s being “sweet” than when she’s salty about having misplaced her favorite hair bow. Between you and me, the cranky, determined version of my daughter is my very favorite. And I don’t want her to grow up thinking that in order to please her audience, being sweet is required. It’s not. Salt away, children of tomorrow!

Second, I don’t ever want my daughter to believe being called “sweetie” is a compliment. Not by a professor or furniture salesman. Consider the firestorm then-candidate Barack Obama caused during the 2008 primary race when he casually referred to female reporter Peggar Agar as “sweetie.” Yes, even the “woke bae” patron saint Obama was in the habit of using the term and trying to correct it, he explained in a subsequent apology. Rebecca Traister, who at the time was covering the race for Salon, explained why using the term sweetie is sexist this way:

“Had he given it thought, he would surely never have used the word,” Traister wrote. “Also troubling is the perception that ‘sexist’ must equal ‘ill-willed’ if it is to be deemed offensive. Someone could call a professional woman ‘sweetie’ and mean it in an avuncular, affectionate, non-harming way — the way Barack Obama no doubt meant to deploy it. But just because a word is not meant as an offense, does not mean that it isn't diminishing, paternalistic and disrespectful.”

The word sweetie is all of those things. So why would we, as mothers, want our daughters to consider accepting a term that diminishes them from anyone else? It has to start with us.

Every single horrifying story that comes out in the headlines about women being assaulted and harassed by men in power reinforces my belief that we can’t afford to send our girls out into the world believing that being sweet is the best way to stay safe, much less thrive. I have to accept the likelihood that my baby will one day be put in a compromising position by a man in power, it’s the undeniable reality. All I can do is prepare her by reinforcing her own sense of self, power and authority. I want to take her sweetness, her sugar and spice, and turn it into something that packs a punch.

I still stop myself from time to time from using the “s” word. I’m not perfect, and banishing a single word from conversations with my little girl won’t change everything, by any stretch. But I’m doing my best to raise a woman who knows her value and understands that she gets to be more than that.

My hope is that one day when a man with authority calls her “sweetie” she knows in her bones how much more complicated and powerful she is than that. Then I hope she hears my voice in her head. Ruth Bader Ginsburg, Malala Yousafzai, Serena Williams, Maya Angelou, Hillary Clinton; none of these women are great because they’re sweet.

Be fearless, be brave, be daring. No sugar or spice required.