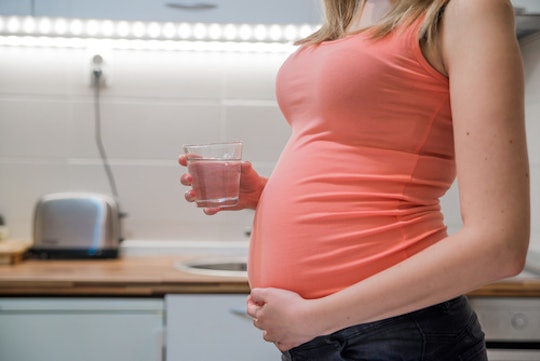 The last time I was offered a drink was at a staff luncheon. My colleague knew I was well into my second trimester — in fact, she’d given me two bags of hand-me-down maternity clothes the day before. But she offered me a glass of white wine nonetheless. “Oh, come on,” she said when I demurred. "My OGBYN always said I could have just one.”

I waved it away, but not before I noticed that the condensation on the glass looked like liquid diamonds. My tongue swelled. Pregnant or not, I thought, I have never known what it’s like to have just one.

You see, I’m six months pregnant, but I’m also a recovering alcoholic. I have two years of sobriety under my belt. You would think that being sober would make abstaining from alcohol during these nine months easy, especially since another person's life is at stake, but it doesn’t. In fact, in some ways, it makes it a lot harder.

I am not judging other women who have a few glasses during pregnancy. A 2015 CDC report says that only 10% of pregnant women have one alcoholic drink per month, indicating that total abstinence is still the prevailing trend in pregnancy. But if a doctor tells my healthy, non-alcoholic coworker that she can have just one drink, I say that is her choice.

I can’t have a drink because I’m an alcoholic, and one drink leads to another, leads to who-knows-what with who-knows-who, and there’s no telling where I end up or what I lose.

I discovered this about myself a few years ago, though it took me a while to actually quit drinking. While I have my war stories (like getting kicked out of my own building because I passed out in front of the daycare before I made it to my apartment), most of my life as an alcoholic was small and boring. I spent most of my time at work, at home, or at the neighborhood bar, where my brother, a bartender, would serve me drinks for free. But in the final months of my drinking, even that bar seemed too public a place for me to drink the way I wanted to, and I spent days either seeking oblivion or recovering from it, all while trying to put on an angel’s face at work. This left very little space for anything like hobbies or friends, much less building a family.

I figured that if I could simply cut out drinking, I’d be free to go after the things I really wanted in life, instead of just blacking out while playing Skyrim. It took me a few relapses to fully accept that there was no way I could drink alcohol safely in any amount. I haven’t had a drink since May 30, 2015.

Now that I’m sober, my life is big and exciting. In the past few years, I’ve started new programs at work, fallen in love, moved into my own apartment, wrote a novel, and moved in with my partner. Now, I’m having my first child.

For me, recovery has been a gift. But I have to work hard to maintain it. That work is not just about waving drinks away — it also involves attending regular 12-step meetings, volunteering to help out and speak at detoxes, reaching out to other women with the same problem, and undergoing weekly psychoanalytic therapy. And that work didn't get easier when I became pregnant.

When you are an alcoholic, sound reasoning and selfless motivations (like, you know, being a decent mother) are not enough to keep you from drinking.

Not too long ago, I told my mother that I had to get off the phone because I was on my way to a meeting. “Why bother?” she asked. “It’s not like you’re going to drink for the next nine months, right?”

What she and many others don't realize is that when you are an alcoholic, sound reasoning and selfless motivations (like, you know, being a decent mother) are not enough to keep you from drinking. If I am to stay sober, it cannot be for this fetus, or for my partner, or for anyone but myself. Because if I can’t take care of myself, how can I presume to take care of anybody else?

My disease is still alive and lurking. Recently, after another agent turned down my novel manuscript, I found myself in the grocery store looking for a decent tomato. I was softly squeezing tomatoes, feeling a dull ache in my bosom, when a voice from out of nowhere said, A drink would probably make you stop feeling like a reject.

I jerked up, bruised the poor tomato in my grip. No, I argued with that not-too-unfamiliar voice, I can’t have a drink because I’m an alcoholic, and one drink leads to another, leads to who-knows-what with who-knows-who, and there’s no telling where I end up or what I lose. And that was that. The voice was silenced, and the feeling passed.

I have loved my unborn son since he was the size of a lentil. But he’s not what’s standing between me and a drink.

That urge only lasted a few seconds. But at no point during that conversation with myself did I think, I shouldn’t drink because I’m 25 weeks pregnant. To other people who do not struggle with alcoholism, that might sound selfish. It certainly goes against everything I’ve heard about motherhood. But it’s what I know I need to do to protect my sobriety.

I have loved my unborn son since he was the size of a lentil (in fact, that’s his nickname). But he’s not what’s standing between me and a drink. Because when the typical anxieties of impending motherhood come up — Will I be patient and kind? Will I have enough money? Will my boobs ever be the same again? — I will always feel compelled to reach for a substance as a way to deal with those feelings. When that impulse strikes, medical guidelines or social pressures or even Lentil’s unbelievably strong kicks aren’t enough to help me fight it. I need a whole program of recovery to keep me sober.

Non-alcoholic women who abstain from alcohol during pregnancy can think of it as a temporary state with a specific end date. The irony is that, as an alcoholic, I never get to think of my abstinence as permanent — I think of it as a day-at-a-time practice. It has no end date, and there are no guarantees. But I know I need to keep going — because now, the stakes are higher than ever.