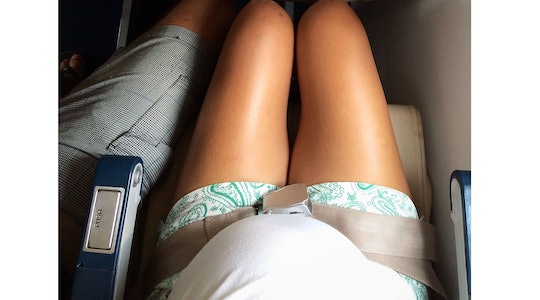 I'm Pregnant, Stranded In Another Country, & I Don't Know When I'll Get Home

When Rachael Muldoon and her husband, both American nationals, left their apartment and two dogs in Shanghai in late January for a business trip to Boston, they expected they would be back in 15 days. But shortly after they arrived in the United States, flights to China were canceled en masse. On March 28, China closed its borders to all foreign citizens, stranding the Muldoons in America indefinitely. Rachael is pregnant with the couple's first child and due in August. Here is how she has managed her pregnancy away from home. As told to Jamie Kenney in late March.

My husband and I both work for an International School in Shanghai. We'll have been there for three years in June. Our contracts go through the end of 2022, so we’re scheduled to be there at least two more years… if we ever get back.

We came back to the U.S. at the end of January for a recruiting fair, hunting for next year’s employees like we do every year. Things were starting to get bad in China when we left, but we didn’t know how bad they were going to get. We were supposed to be here 15 days, and we’ve been here three months now. We’re from the area, which is great, so for a little while we were able to crash with friends and family. But as it became more and more apparent that this was going to be an extended situation, we went into contingency planning mode. This has been a little nuts.

I can’t fly past the end of June: Most airlines won’t let me on a plane for an international long-haul flight past 34 or 36 weeks.

We had six rounds of tickets booked to go back to Shanghai that all got canceled for various reasons. There was one point where we had close to $20,000 worth of airline tickets sitting on our credit cards. (So far most of them have squared.) Then, on March 28, China closed its borders — they’re not accepting anyone with a foreign passport right now. Our tickets were for April 4.

When they closed the borders, I spent an entire day crying. I’m due in August. I can’t fly past the end of June: Most airlines won’t let me on a plane for an international long-haul flight past 34 or 36 weeks. So if China hasn’t reopened the borders by then, I’ve told my husband I’m swimming to China, and he can meet me there. This is further complicated by the fact that my husband is a high-school principal — an essential employee — and our school starts in August. So if they do reopen the border past when I can fly, he has to go back. Then we’re thinking, “How do we schedule you being here for the birth of our first child?”

When we got here and we knew we wouldn’t be able to go back within two weeks, I contacted my doctor in Shanghai to let her know that my flight was canceled. She said it probably wasn’t a big deal to miss one appointment, but said it might make sense to seek out care where we are. I contacted my insurance company — we have Chinese health insurance that covers us globally — and they gave us a list of local providers. Another facet of this is that my husband and I were in the middle of buying a house here in the States that we would come back to in the summer. We had literally just gone under contract with the house when all this started happening. I called around and saw who can see me the soonest and then did some research. I found an office here in Vermont that has been awesome. I’m really glad I took the time to find a provider that I liked and that I feel good about as opposed to waiting until I was in a pinch and then I just had to see whoever was still accepting new patients. I’m sure if I called today they would be like, “We’re not seeing new patients; sorry.”

Every time I’ve been there, they’ve been super supportive of the fact that from Day 1, they know the plan is for me to go back to China. At first it was, like, "We can talk all we want about a birth plan, but I’m not planning on having this baby here." Now we don’t know. In February, that wasn’t even on the table. But now we literally can’t get home. My doctor here in gives me a copy of every single test I’ve done and all my records every time I leave in case tomorrow I have to get on the plane so that I can go back with all the information that my doctor in Shanghai would need. Three months ago, I never in a million years thought I would still be in the United States, but now I feel like anything is possible at this point. So I feel like we start to making plans for “OK what happens if…” Because I’m neurotic. I'm a planner. It makes me feel better to have a plan that I don’t like than to not think about it and come to that crossroads and be like, “Well, sh*t, what am I going to do?”

I feel like I am managing better now than I was a month ago. I think about the list of questions that I’m making for my doctor tomorrow. When I was there a month ago, I feel like I spent most of the brief appointment crying. I was trying to convey that I was just so stressed. But it almost feels like the border closure was so definitive — there’s literally nothing I can do — it almost made me feel better.

I’m a little bit grateful, too, because of all the isolation. We've basically been self-isolating since February. I think this might be a common theme for anyone who’s in a good safe space. I think all about about how lucky I am that I do have the flexibility to work from here (Shanghai hours, which sucks). I’m still being paid. So economic uncertainty is not something I worry about. I feel like I’ve had more time to really experience being pregnant. I’m not going to an office every day; I’m not commuting. And I find that I’m enjoying way more than I thought I would. Overall, I’m almost grateful for not having anything else to think about.

The end goal is to get back to Shanghai. That is my real life. I want my baby to be born there. I know our families don’t really understand, but they also didn’t understand when we decided to move overseas to begin with. I want to have a real life for him or her to be able to start from Day 1, but I also feel like maybe that’s not in the cards anymore and there’s also nothing I can do to plan or control that. We started booking tickets every two weeks starting the beginning of May. We'll just wait for them to be canceled and get on the first flight that isn't. Our next departure date, which we don’t think is likely, is May 5.

But knowing that I’m not getting on a plane next week or the week after that has given me a little bit of space to be able to breathe and focus on getting myself into a good head-space, which is ultimately good for the baby, and it’s good for me. It keeps me sane, which keeps my husband sane. So we’re all happy in this house. This baby is very, very wanted, and so I feel like at the end of the day, I just keep coming back to “baby is safe, we’re safe, the rest we’ll figure out."

More Like This
Can You Bowl While Pregnant? Experts Weigh In
I Found Gender Euphoria In My Second Pregnancy
Is Salicylic Acid Safe To Use On Skin During Pregnancy?
Everything To Know About Pilates During Pregnancy