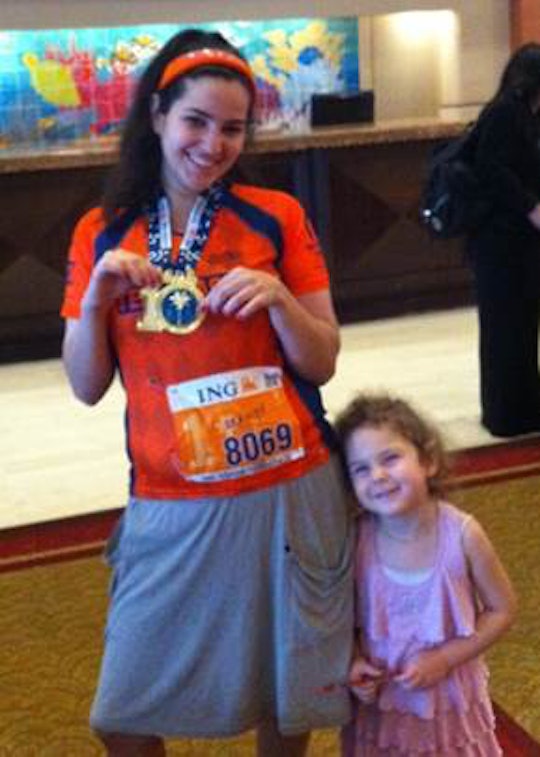 We’ve had discussions about feminism before, my 7-year-old daughter and I. It’s just the two of us: me, with my constantly evolving ideas of what it means to be a strong, independent woman, and she, with her love of science and Barbies, Bob the Builder and My Little Pony. There are no male role models in this home we live in – no dad to build her bike or drive her to play dates, no brothers to fight with over the last chocolate chip cookie or help conspire against bedtime and spinach. She attends an all-girls school. So it’s just me and her, woman and girl; mother and daughter against the world.

There are times that I wonder how her upbringing will impact her future relationships with boys, and whether or not our girl power! attitudes unintentionally place all men in a negative light. Feminism, after all, is the political, economic, and social equality of the sexes, and I want her to know that just because our lives do not include a stable, male role model, this does not mean we are against men. That is not what feminism is about.

There’s a perception out there that all feminists are bitter, angry, and campaigning against men. I think back to the video circulating a while ago with the “potty-mouthed princesses” in overdone makeup and ridiculous pink and purple, dripping with attitude and cursing like sailors to make their point – that girls aren’t just pretty little objects, and that issues like the pay gap, rape, and objectification of women are more offensive than little girls dropping f-bombs.

I hated that video. I felt like it was loud, distasteful, and – quite literally – shrieked its message. There was a lot of discussion following it: opinions to the left and the right and every direction in between. Some viewers found it empowering for little girls who don’t even have grade school under their belt – much less high school, college, glass ceilings, periods, awful dates, catcalls, stretch marks, morning sickness, and childbirth – to curse their way through a list of all the sh*t women have to deal with. And I get it. I get why they did it, and I get why they went about it so vocally. It’s all true: there is gender discrimination in this country and around the world. Women are objectified, grossly underpaid, and discriminated against on a constant basis. This is true. And this needs to change.

We have plenty of time to talk about that. For now, I want her to enjoy being young.

Why? Because I already know exactly what it means to be a woman. I know what it’s like to get dressed in the morning and instead of deciding whether I like what I'm wearing or not, I often worry about the effects my outfit has on my male co-workers and strangers. I know what it's like to find a dress I adore and pause before purchasing because, wait a minute, is this long enough? Covered enough? Too open or slutty or prudish or sexy or not sexy enough? Is what I choose to wear today going to make other people uncomfortable?

I already know, very well, what it’s like to live for other people. I know that despite earning the same amount of money working the same amount of hours as our spouse, there are people who'll still expect me to come home and cook dinner, do the dishes, and pop in a load of laundry. I also know, in certain households and to certain men, asking for help is considered "nagging".

I know what it's like to worry that at any given moment I'm not: too assertive, too loud, too quiet, too opinionated, too educated, too angry, too emotional, wearing too much makeup or too little.

So I worry instead about letting my daughter be young. I already know she’ll have to fight five times as hard as a boy her age (or younger) to get the same job. I know that when she graduates college and goes on interviews, some people will assess her on her looks, not her qualifications. I know that when she begins to date, she’ll sometimes worry whether she’s attractive enough for him, not whether he is good enough for her.

And when she meets someone she likes, I know she'll worry about the things we've all worried about: Am I texting too much, calling too much? There may come a time when she put hours of effort into looking like she “woke up like this,” to play into the Cool Girl trope. I worry she'll question whether she's too assertive, too loud, too quiet, too opinionated, too educated, too angry, too emotional, wearing too much makeup or too little.

I'll teach her to dream big and to dream often and to follow those dreams anywhere they might lead. Yeah, I'll start there instead.

More Like This
Brooke Shields On Why We All Need To Talk About Aging In A Totally Different Way
Celebrate Your Kid With These Cool Preschool Graduation Gifts
12 Genius Floats With Canopies (& Cupholders), So You Never Have To Leave The Pool
Ashley Graham On The “Fun, Organized Chaos” Of Raising Twins