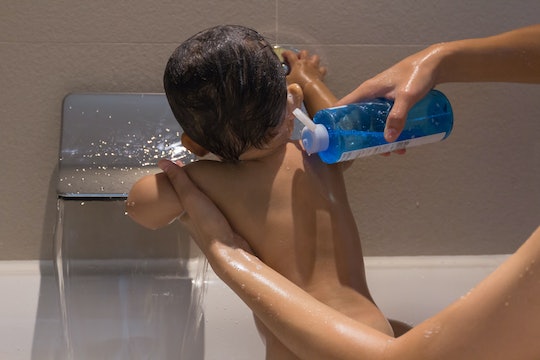 I'm Ready To Quit Co-Bathing, But My Kid Isn't

Growing up is all about transitions, and that often means giving something up. As parents, we guide our children through these changes, helping them through relinquishing the bottle, pacifier, or lovey. Fortunately, we don't have to do it on our own. There are resources on how to wean your child from the breast, ditch diapers for the potty, and transition to a big kid bed. I wish I could say the same for co-bathing. I'm ready to quit co-bathing, but my kid isn't, and I honestly don't know what to do.

My daughter has always had a tendency to fear the bath. When she was tiny, the only way I could get her to stop shrieking in the baby bath tub was to give her a terry cloth starfish to suck on. Eventually, I figured out that if I got in the big tub with her, and sat behind her with my legs around her, she was much happier. I was even able to breastfeed her thanks to all that lovely skin-to-skin contact. I could also bend my knees and let her recline against my thighs. I think seeing my face went a long way toward reassuring her that bath time was nothing to be scared of.

Baby girl went through a short phase where she enjoyed splashing around and playing with her bath toys on her own, but now at 2.5, she's having none of it. When I announce that it's bath time, she asks, "Mommy, you go bath?" and takes my towel down for me. Then, it's all, "Come on, mommy. Shirt off. Pants off." If I suggest that she might try to bathe alone, she goes into full-blown tantrum mode. It's OK for now, but she's getting older, and I'm getting more and more pregnant by the damn day. Maneuvering my growing belly in a tub with a toddler isn't going to get any easier.

I don't personally think there's any point at which it's inappropriate, but some people get worked up about being nude in front of their kids or bathing with an older child of the opposite sex.

There are certainly wonderful benefits to co-bathing. For starters, it's great bonding time. With a baby you get to cuddle, and with a toddler it's uninterrupted time to play and chat when you can't be distracted by the phone. Co-bathing is also a convenient time-saver (I know I wasn't getting a daily shower as a new mom). I can also get a lot more leverage to rinse my daughter's hair (which she hates) if I'm in the tub with her. Co-bathing can be really relaxing for both a child and a parent, especially if the parent hands the kid over to their partner so they can enjoy a soak when baby's tubby time is over.

If you're going to co-bathe, however, you have to be willing to make some sacrifices (not the least of which is the possibility of poop in the tub). It takes some preparation. According to What to Expect, you need to gather everything you need (towel, shampoo, etc.) before you get in the bath because you don't ever want to leave your little one unattended, not even to grab the rubber ducky. It's a good idea to have a non-slip mat, too. You'll want your partner on hand to handle that slippery baby getting in and out of the tub. You should know that you're not going to be enjoying hot tub temps, either. Dr. Sears recommends running the water to body temperature.

I don't think it's going to fly with my kid if one day I just up and stop bathing with her.

Parents quit co-bathing for all kinds of reasons. I don't personally think there's any point at which it's inappropriate, but some people get worked up about being nude in front of their kids or bathing with an older child of the opposite sex. Whatever. It's a personal decision. For other parents, it's a matter of practicality, like you can't fit in the tub with them anymore. Maybe you're ready to hand over the responsibility to an increasingly independent child, or maybe you're just tired of taking your damn clothes off every other evening.

So, whatever your reasoning, you're done with co-bathing. What do you do now? Gradual extinction? Cold turkey? Rip the Bandaid off, so to speak? There's not a ton of guidance out there. Parents suggests playing up that it's a "grown-up privilege" and starting to hand over responsibilities such as washing and rinsing their hair and body. Momtastic recommends starting to talk about personal boundaries and watching for cues from your child that they're ready. According to How to Adult, it's a good idea to establish a new routine, but one that still includes you (just at arm's length).

After all, my little co-bather won't be little forever.

I don't think it's going to fly with my kid if one day I just up and stop bathing with her. I'm willing to listen to a little crying, but I have to pick my battles. So that leaves me with baby steps, if you will. I've already shown her how to lie back to wet her hair (which she much prefers to me using a pitcher). I put soap in her hand and let her scrub her little body. Slowly, I'm starting to exit the bath a little before her, and as time goes on, I'll get out earlier and earlier. Hopefully, she'll respond to this before her brother makes his debut and the slow and steady approach is no longer an option.

In the meantime, I'll try and get over having water dumped on my head for the hundredth time and remember that this time is special. After all, my little co-bather won't be little forever.