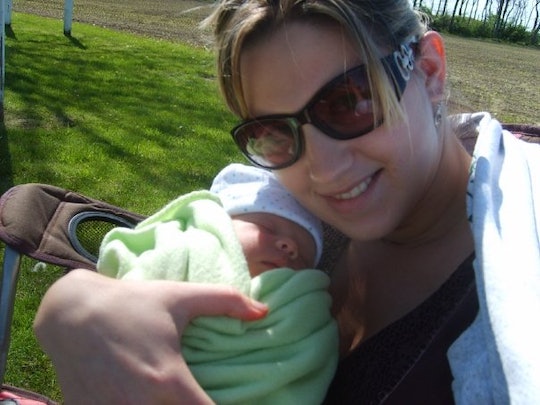 Six months after I celebrated the fact I could buy my own beer (except it was actually Mike's Lemonade because I can't stand beer), I took a pregnancy test. I didn't think I was pregnant, but looking back, as if I am watching a movie of my own life, I can't believe how stupid I was. You're two weeks late! I want to shout at the screen while Past Me protests mightily to the fact there could even be a chance that I was pregnant. You've never even been a day late in your life! At the time, I really did think there was no way I could actually conceive a life inside of me. I really did think it was some impossible biological feat.

So when I peed in a cup one morning at 2 a.m. — I was so nervous my hand was shaking too badly to hold the stick steady enough to pee on it — I leaned over the test on my kitchen table to watch as two tiny blue lines instantly materialized in front of me, and I felt nothing but complete and total devastation. I was 21, completely broke, living in an apartment where drug deals went down on the regular, and still saving up my laundry so I could take it home once a month instead of paying 50 cents to do it at school.

I'd like to tell you that I was overjoyed to be pregnant and that every part of my maternal-leaning heart longed to be a mother, but the truth is, I was absolutely devastated. I'd built up a life around my image of being the picture-perfect "good girl," right down to being the Valedictorian of my high school, earning a full-tuition scholarship to college, and carefully planning out my entire future on one of my infamous "to-do" lists. A pregnancy derailed all of that. It rendered life, as I knew it, totally impossible.

So when those two tiny blue lines popped up, I crumpled to the floor and cried for hours. I woke up the next morning, still wearing my clothes from the night before, and felt like I walked around in a daze for the next few weeks. I knew right away that I would parent this baby, but that didn't make reconciling the reality of being a mother — especially one who started out accidentally getting pregnant — any easier.

It wasn't until my daughter was placed on my chest after an excruciatingly painful 14-hour labor, during which, apparently, I tried to check myself out of the hospital more than once, that I felt like my life, which I had been so convinced was ruined forever, was actually even more perfect for being interrupted by a baby.

And ever since that day, when I truly embraced being a mom (and really, it took the entire 10 months of pregnancy for that to happen), I've been amazed at how perfect things have really turned out. Part of me honestly believed that because I had my daughter "early" and in an unplanned manner, then that meant my life should therefore be a struggle. But it hasn't worked out that way at all for me. She has — and I can say this in 100 percent honesty — made my life so much better than I could have ever dreamed, right down to the smallest of details.

She Gave Me Life

I know that technically I gave her life, but in every possible way, my daughter woke me up from a life that I wasn't living at all for myself. I had spent 21 years carefully planning the "perfect" life and doing everything according to some list that I thought I needed to follow: All As? Check. College scholarship? Check. Nursing degree? Check.

But as soon as she burst on the scene after 14 hours of labor, literally shattering my body, she also shattered all of my concepts of what was important in my life. I no longer needed the outside ideas of what I thought I should do to be worthwhile — I had her and honestly, that was all that mattered.

She Gave Me My Dream Job

Even though my daughter was all I needed in life, I was still barely out of college when I gave birth to her and totally unemployed. Meanwhile, my husband (we were married on a break from classes in the winter before she was born) still had a semester of college to go, so it was up to me to support us.

I got a job as a nurse to pay the bills and carry our family, but rocking her in my arms, I knew that it wouldn't be long until I'd never leave her for a job that I hated again. Six years and three more kids later, I finally quit that "stable" job as a nurse. I know my dreams started the second I looked into her eyes.

She Gave Us Each Other

Maybe I'm not supposed to say this, but I think in a lot of ways, my daughter brought me and my husband together. We've been through so much since that first night I cried on my kitchen floor, and I honestly don't regret a single moment of it. It feels like we have such a history together and that's a bond that feels pretty darn unbreakable. Having our daughter together was just kind of the icing on top.

She Taught Me It's Not All About Me

Sure, this is a list about why I'm glad I had my daughter so young, but guess what? One of the greatest gifts of all is simply that she's here, existing in a way that has nothing to do with me.

When you're 21, the world revolves around you, but when you're 21 years old with a kid, it's a big, fat slap in the face that the world doesn't revolve around you. Which is a very good thing to realize earlier rather than later.

She Taught Me To Enjoy Being Young

I've always been an old soul, and I had about zero interest in doing any of the typical things you do in your 20s, like partying, clubbing, and doing whatever the hell movies try to convince us that people in their 20s do. And when I got pregnant, I had even less reason to do those things.

Instead of mourning the loss of "losing myself" by becoming a mom at 21, I actually welcomed the chance to "find myself" at an early age. Why waste time pretending to be something I'm not, when I was actually quite content to dive right into adulthood? In my mind, having the chance to have my family early while building my dream job on the side has actually been a huge blessing.

And if I'm being totally, totally honest, I genuinely can not fathom doing the newborn stage for the first time at any other age than I was without dying. There's a reason our bodies prefer to have babies young and someday, I'll look forward to sleeping in again, even if I have to wait until I'm 40.