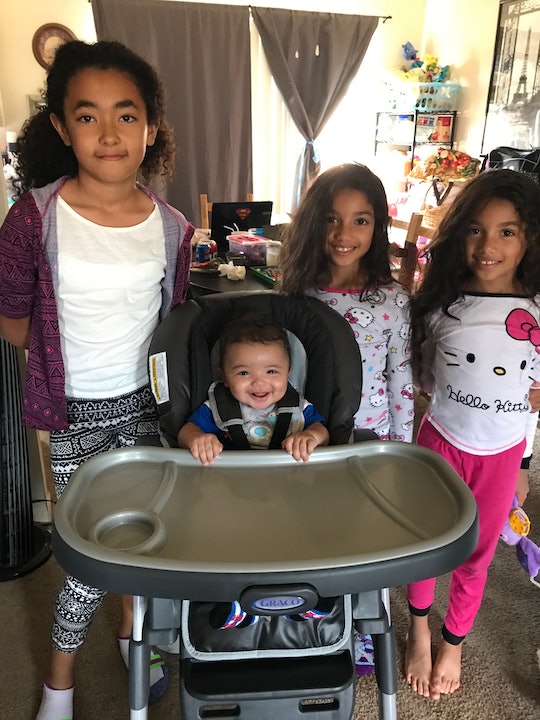 I'm Afraid for My Mixed-Race Son In America

Earlier this year, I had my first son, Kai. When he was born, I was overjoyed. We had three girls already, and we felt like our son completed our family. Around the time he was born, however, Donald Trump was sworn in as president. Reports of hate crimes across the country started surfacing, as well as more unarmed young black men being shot by police.

I am African-American, but my husband is Costa Rican and Nicaraguan. I have three daughters, all of whom present as mixed-race, and my son looks mixed-race as well. He's not even 6 months old yet, but I am so terrified of raising my mixed-race son in America.

It's not like I didn't know what was going on in the world before having my son. I am a black woman in her 30s from the south side of Chicago, which is one of the most segregated cities in the country. I lost a friend to gun violence when I was 20 years old, and growing up, I heard about young men being killed by police in my neighborhood. My older brother would regularly come home to tell us about some friend of his who had just gotten shot. In black America, this type of violence is normalized. When I lived in Chicago, shootings over the weekend were reported in numbers, not by the names of the victims.

But now that I have children, this type of violence hits even closer to home. And because my son is both black and Latino, I'm terrified that he will never feel safe while walking the streets.

We currently live in a suburb of Los Angeles where very few black people live, and my children go to a school where there are very few black children. My 10-year-old daughter once told me about a boy in her class who used the N-word as a "joke." She asked me to speak to her teacher about it, because she couldn't bring herself to discuss it with her teacher. When I talked to her teacher and vice-principal, both seemed concerned but not outraged, the way I was. It didn't seem to bother them the way it bothered me, but then again, they weren't black. I don't know if the boy was even disciplined for what he said.

I don't know what perceptions will be projected onto my children as they get older. I don't know if my son will be viewed as a violent criminal by his white peers. I can say that I'll do my best to keep him safe, but I know that promise only goes so far. I can't prevent him from becoming another Trayvon Martin, an unarmed, 17-year-old boy who was shot and killed simply for walking through the wrong neighborhood at the wrong time. How can I not be afraid?

Any time there's a story in the news about systemic racism, I feel the need to talk to my children about it. When the protests were happening in Ferguson, Missouri after the police officer who shot Michael Brown was acquitted, I watched the live-streaming coverage on my iPhone. I saw cops shoot rubber bullets and tear gas at crowds of protesters. It reminded me of footage I saw from the 1960s, when civil rights demonstrators in the South were hit with high-powered water hoses and attacked by police dogs. I hadn't had a son at that point, but it made me terrified for the other black men in my family.

I am worried for my daughters as well. Black women are paid less than white women in this country, and they are subject to offensive and racist stereotypes. But I worry about my son for different reasons. Like my daughters, he will likely be judged for his skin color, but he is also more at risk of being stopped by police for no reason. He could easily become another Tamir Rice, the 12 -year-old from Cleveland who was fatally shot when police heard reports that he had a gun. It turned out to be a toy gun, but when the police learned that, it was too late. They assumed the worst, shot first, and asked questions later. I can say that my son wouldn't be playing with a toy gun to begin with, but how do I know that for sure? How can I control everything he does in the future?

My son will grow up knowing his heritage. He will be taught to be proud of his Latino and African-American roots. He will know the stories of those who came before him, of both his black and Latino ancestors. He will also know how to deal with tough situations. He will know how to respond to discrimination and how to endure and keep his head held high regardless. Despite what's going on in our country right now, I'll continue to to make sure that all of my children can go into the world and make me proud. But I'd be lying if I said I wasn't scared of what happens afterwards.