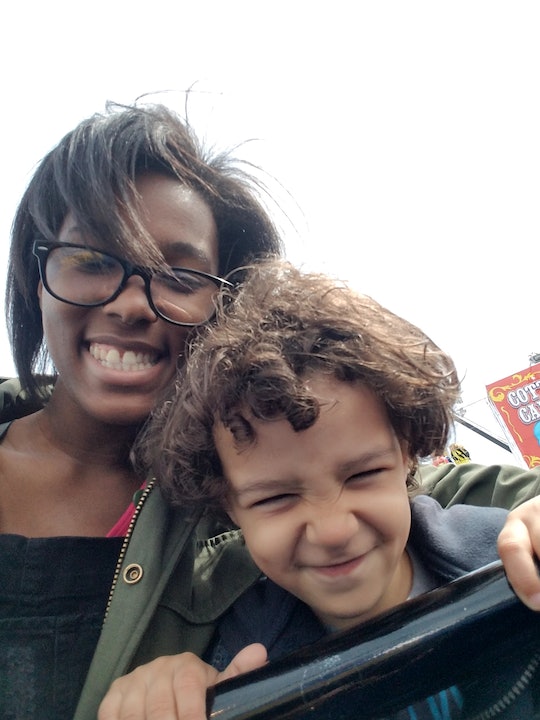 It's Hard To Be The Black Mom Of A Mixed Kid

When my son was born, he was pretty much as pale as his white dad. We were a bit surprised, but we also knew that's just how genetics work sometimes. What really surprised us, however, were how people responded to seeing his skin color. No one could believe that I, as a black woman, had birthed such a white baby.

These questions continued throughout his life. People have asked me countless times whether I was my son's babysitter or nanny, and once, when I was out with a white friend, the waitress asked her questions about him, because it never even entered her mind that he could have been mine. It was heartbreaking, and also infuriating.

Many white moms of mixed kids have told me that my perceptions of how people deal with my mixed kid are wrong, and that I'm being overly sensitive. But as a black mom with a kid who looks white, I'm seen as taking up space, and I find it incredibly frustrating. No one knows what to do with me. Strangers look at me and then at my son, trying to find enough similarities between us to make the familial connection. Some will be bold enough to ask, “Is he yours?”

How do I answer that without coming off as the angry black woman I rightfully am? Of course he is mine. I carried him in my belly for nine months. I cuddled his tiny little body in the middle of the night, praying for him to sleep again. I nursed him from my body. I kiss boo-boos, I fight with him to take a bath, I tuck him in at night. HE IS MINE.

It's 2017. It shouldn’t be that hard for people to believe that women have children who aren’t just one race. Interracial relationships have been on the rise for the past 50 years; as of 2015, 17 percent of new marriages were interracial. Mixed kids will become the norm, not the exception, and it'll happen sooner rather than later.

But I'm not going to sit there and give these kind of statistics to a complete stranger on the street. I'm just going to smile uncomfortably and answer the same question for the millionth time. Then I'm going to silently fume, because why have I been subjected to the same line of questioning, over and over again, since the day my child was born?

A stranger on the street actually said, "Oh, your baby is white? How lucky!"

I have even been told that I am lucky to have a child who is mixed. A stranger on the street actually said, "Oh, your baby is white? How lucky!" I don’t even know what that’s all about. I consider myself lucky to have a child, of course, but his race does not factor into that luck at all. I don’t need my child fetishized by a person who thinks that it is "lucky" that my son does not "look black."

I also don’t need the invasive line of questioning about my kid’s father’s background. So many times, I have had to pick my jaw up off the floor because someone has started their questions with “So, is his dad white or what?” Um, excuse me? How is that any of your business?

Of course, when I try to express my exhaustion and rage, or when people come up to my child and want to touch his hair (seriously, what’s up with that?) I'm viewed as being in the wrong. People think that I'm being over-sensitive, or that white moms of white kids with different features from theirs have it just as bad. "You're not the only one who has this problem," a blue-eyed blonde lady with a kid whose hair and eye color are dark once told me. She and her husband both have light features, and she said that she gets asked if her kid with dark features is hers all the time.

When people say things like this, I paste on an uncomfortable smile and just go about my day. But it’s a heavy burden to bear.

But it's not really the same thing at all. Her child might have different features, but he is still white. Occasionally, someone might be confused by his dark features, but you can't for a minute put yourself in my shoes because someone thinks a blonde can't have a brunette kid. When people say things like this, I paste on an uncomfortable smile and just go about my day. But it’s a heavy burden to bear.

I don't imagine that I'll ever stop having to answer these questions, but I do hope that people think about their words first. Do some due diligence before you come out and ask a black woman if the kid with her is hers, just because they don't really look alike. It's hurtful and demeaning, and it needs to stop.