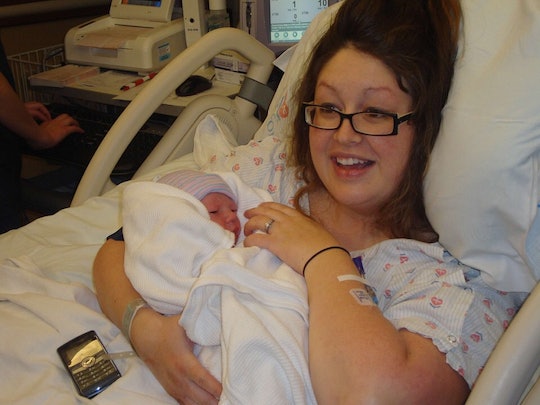 I'm Traumatized By Other People's Births

Are our expectations off, or are births generally more terrible than they should be? I had an “easy” birth. What magical things did I do to bring about this? What sort of stretches or magical oils did I rub on my lady parts to deliver such an amazing fortune? Sadly, I do not know. The pregnancies and births I had were both completely different, but they were the same in one important way: no emergency surgery, no cares about the health of the baby, no concern over my safety and no medical students observing. I hear that is pretty rare. The abnormal ease of my births puts me in the weird position of being scared to try for another baby — I'm traumatized by other people's births.

I can’t stomach the thought of having births like my friends. The friends that ended up with c-sections after days of being in labor. Who suffered through forceps deliveries. Whose large tears took forever to heal. Who got to the hospital too late and missed out on the window for pain medication.

I’m traumatized by other people’s trauma and stuck trying to get the thought of another baby out of my head, yet unable to commit to going through birth again in case it turns out hard. By hard, I mean a "normal” birth that hurts. No one else in the world talks about having nice experiences and even if they do, it still usually ends up being about the pain — their triumph in winning against the pain. I have a chronic pain syndrome. I have no desire to fight birth pain. Also, you could argue that orgasmic-hypnobirthers talk about their “nice” experiences — yet I’d rather they didn’t.

Everything we know about childbirth is to fear it.

My second baby was due at Christmas. She even had some presents under the tree. If the kid doesn’t arrive for presents, I thought, what will end this madness? We scheduled her to be induced on December 31 — New Year's Eve seemed like a good date since we would get the tax deduction for the year. Also, due to ulceration on my bladder, she was causing some pain and I didn’t feel like I could wait another day.

I felt fantastic about how this was all going. They stuck the hook up and broke my bag of waters. My parents stopped in with my daughter to say hello.

We checked in at 2 p.m. and were led into the delivery room. I changed into my gown for the evening. It was a lot like Scarlett O’Hara’s gown from Gone With The Wind, in that it looked like they took the curtains from the hospital privacy divider and made them into a gown for me. Fancy.

When they hooked me up to the machines, they found out that I was having contractions; in fact, I was already 3 centimeters dilated. Considering I had tapped out at 2 centimeters from the pain during birth #1 and gotten an epidural, I felt pretty proud.

They began the pitocin and I waited to feel the pain I knew would come and make me moan like an animal. It didn’t really happen. They did a check and I was at 7 centimeters dilated. I started to sweat the window for getting the epidural. I may have overplayed the pain I was feeling in order to my spinal tap, but I would do it again in a heartbeat. I don’t remember the anesthesiologist.

I felt fantastic about how this was all going. They stuck the hook up and broke my bag of waters. My parents stopped in with my daughter to say hello. I started to feel different, so they left. The nurse checked and they ran off to get the doctor. Ran was an overstatement. They probably just walked normally. Here is where I really need you to give me a round of applause: I had pushed that baby out by 8 o’clock and I didn’t poop on the table. Oh, also I gave birth to a beautiful daughter and that was wonderful, too.

But I couldn’t imagine getting to experience this perfection pinnacle of birth and having an actual traumatic birth or emergency situation. I don’t know what caused this birth to be so glorious. I broke rules. I had Subway sandwiches without heating them up first, I had some caffeine, I had hot dogs, and I had chocolate. I took a really warm bath one time. I didn’t pay attention to whether I got enough exercise. I stressed out a lot.

I had so many friends that had done everything right to end up in labor for days. Then having to have a c-section. I had seen so many women that had made a point to treat their bodies like the temples of fertility that they were, and still end up with a very rough birth. What magical formula allows for them to end up with that experience and me with a good one? I can attest that it is most certainly not fair.

I am scared to push my luck. I am afraid that the bad decisions I made in the first and second pregnancies will catch up to me in the third. That it will be so bad that when it’s time to tell my daughters about pregnancy and birth I won’t be able to remember the magic that happened during this pregnancy. That I will only be able to regale them of the horror that happened that third time. Because if I learned anything through two deliveries, it's that sometimes anticipation of pain is worse than the actual thing.

More Like This
Mom Gives Birth To Record-Breaking 16-Pound Baby
22 Valentine's Day Pregnancy Announcement Ideas Sweeter Than Candy
Here's What Pregnant People Actually Want For Valentine's Day
Fun, Sexy Maternity Lingerie, For When The Mood Strikes
What Parents Are Talking About — Delivered Straight To Your Inbox