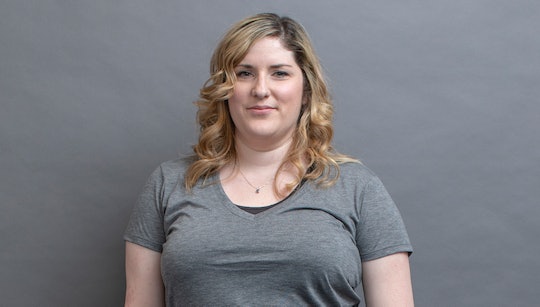 I'm Trying To Conceive With PCOS, & Haven't Had A Period Since 2017

Jessie has been married for three years and trying to conceive for a year. This is the first installment of her Trying diaries.

As I came to this project, I hadn’t had my period since 2017. Yet another notification popped up on my phone from the app I use to track my cycle: “Please update your cycle date to maintain accuracy.” If that app were a person, I would have screamed in its face that I have nothing to f%*&$#!g tell them. Since it was not, I simply deleted the notification and screamed silently inward. The same app notified me that I was currently on cycle day 99. Yeah, that isn’t a typo. I had been waiting around 65 days for Aunt Flo to kindly come and screw up my week, and she flat-out refused to grace my uterus with her presence. So rude. Most ladies would be grateful for a holiday from their periods, I am acutely aware. I, however, was not at all pleased.

My husband I have been married for three years, and together for nine. We recently bought a house and are looking to start our family. After a year of trying to conceive, the stress has grown.

Just after my wedding, I received my diagnosis of polycystic ovarian syndrome, or PCOS. My family doctor touched my arm gently and said the words that would shape my entire journey to motherhood, “There is a very real possibility that you may not ever be able to become pregnant, and if you do, it is going to be very difficult…” The words rang in my head repeatedly and jumbled around like bricks in a dryer, each word feeling heavier than the last. Those same words felt jagged and hollow as they left my lips for the first time once I was back in the safe confines of my car with my husband, Jason. “I may not ever be pregnant. We may not ever be able to have children.”

My loving, patient, and supportive husband immediately abandoned any of the disappointment he may have been feeling and said the exact words I needed, “Well, we will still try. And if it doesn’t happen, we will adopt. It’s going to be OK. We will still be parents.”

Since then, I have participated in two cycles of the fertility drug Clomid, in combination with metformin and medroxyprogesterone, the idea being that this will kick my cycle into gear and allow me to get pregnant.

On the rare month that my period does decide to punctuate my sex life all on its own, I’m not sure whether to cry tears of frustration at another failed attempt to get pregnant, or tears of joy and celebration that it arrived unprovoked by the dreaded course of medroxyprogesterone.

As I'm sure you understand, you need to ovulate to get pregnant. Getting your period can be a sign that you have ovulated, but it's not guaranteed. So not only is it frustrating not to have a period, when I do finally have one, I get to worry whether an egg was produced.

On the rare month that my period does decide to punctuate my sex life all on its own, I’m not sure whether to cry tears of frustration at another failed attempt to get pregnant, or tears of joy and celebration that it arrived unprovoked by the dreaded course of medroxyprogesterone. I only take the medroxyprogesterone — a form of hormone replacement — to restore my period after a period of medical amenorrhea. I will go to extreme lengths to avoid taking medicine after a few not-so-wonderful allergic reactions. Also, hormone medications make you feel like a soggy pile of garbage, so there’s that.

There is a small window in which these feelings shift. When trying to conceive, you spend the first two weeks after your period tracking any small change in your body to pin down ovulation, so that you can have the worst kind of sex, planned down to the hour and with a single end-goal, each of you hyper-aware of the purpose of the union and stressed to the point where an orgasm is hard work. Ha.

About six months ago, it felt like a new person was announcing their pregnancy daily. I avoided social media as best I could, but I found myself obsessing over each announcement and update and spiraling further into a spiral of jealousy and self-loathing. My anxiety grew as I imagined how many more I would have to endure, and why it was that some announcements would hurt more than others.

Most importantly, these constant comparisons were affecting the joy I felt about so many wonderful things happening in my own life. So, I started focusing on celebrating myself and my accomplishments outside of trying to conceive. I actively worked on surrounding myself with a small group of strong women who helped lift me up and remind me of my worth. These friendships, and the encouragement of my husband helped to remind me of my other desires outside of trying to conceive and to see that there is a light in so much of this darkness.

You begin to do the unthinkable; you start praying that the annoying spot of blood on your underwear shows itself so that you can get this round over with and try again next month.

Once you have gone a few rounds of hormone treatment, you encounter the dreaded “two week wait.” I may not know what day my electric bill is due every month, but if my period shows up in a given month, I can immediately tell you the precise hour that I can hope to have subsequently ovulated, carpet-bombed the egg with sexual activity, waited two weeks for the wish to take hold in my uterus, and then take a pregnancy test that will answer the only question my brain seems capable of, while being as medically accurate as possible.

Once the two-week wait is over, and you have read every forum about pregnancy symptoms that your little heart can Google, you begin to do the unthinkable; you start praying that the annoying spot of blood on your underwear shows itself so that you can get this round over with and try again next month. Because when you accept that no, for the 1,325th time, there is not a line on that urine-soaked stick, you know that the only thing to make you feel any type of comfort is to try again.

So now, after 101 days, my period has finally decided to grace me with her presence, following an extended cycle of angst and fixation on its absence.

With my period a few days behind me, I now begin the part of my cycle in which I anxiously await ovulation. I don’t typically ovulate until around the 18th day of my cycle, but with so much on my schedule within the next few weeks, it wouldn’t surprise me at this point if I ovulated early. This would be massively inconvenient, as I have been waiting for this for actual months, and my partner and I being in the same state during ovulation might be physically impossible if it were to arrive earlier than is normal.

Now that I actually have sh*t to do, my period decided to present itself, like that ex that rips your heart out and then just as soon as you (and usually someone new) have placed it comfortably back into your chest, sends you a midnight text with a link to a song that reminds them of you. Unfortunately, you don’t get to tell your period, “hard pass.”

I am currently on vacation with my husband in Texas, visiting my brother and my dad. We're all staying with my brother at his house just outside of Austin. Ovulating right now would mean adding even more layers of awkwardness and dread to the process of perfectly timed sex. I really don’t think my husband can hang, or rise, rather. Having your in-laws just downstairs might be the deal breaker, here. Take your time, little egg! Let’s wait until after we get home to get this on.

The previously announced pregnancies have turned into birthing announcements, and I feel a spark of true happiness at the sight of these newborn babies. Unlike the sinking feeling of despair and hopelessness I experienced at the sight of what felt like a never-ending stream of baby bumps, it is incredibly difficult to be upset looking at a perfectly healthy and happy baby and mother.

It gives me a renewed hope and contentment for both our family as it is, and our family for what it will someday be. There will always be pregnancy announcements, and sometimes, they will hurt like hell, but following them there will be new life both for those parents and for my partner and me as we grow emotionally closer in our journey to parenthood.

More Like This
The Euphoric Terror Of Rollerskating Was Exactly What I Needed
I'll Be First In Line To Vaccinate My Kids, But I'll Never Forget That We Were Last
Tick's Head Gets Stuck Under Your Skin When You Were Pulling It Out?
9 Surprising Signs You Might Have A Sugar Intolerance