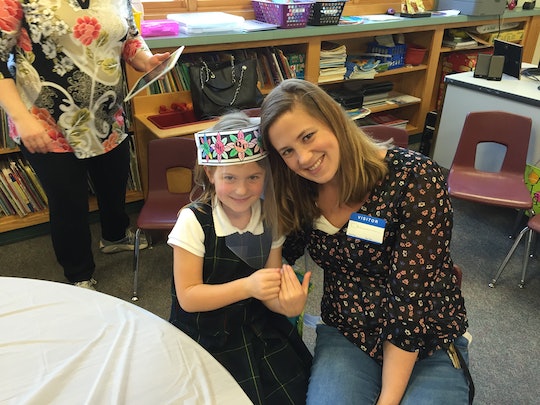 Every few years, much like this year, my birthday falls on Mother's Day, and while I feel both kind of warm and fuzzy inside to have two such momentous occasions on the same day, it also means one very depressing thing: my day boils down to a two-for-the-price-of-one deal. I know that maybe that sounds completely shallow to some people, but on a day when I am, actually, secretly dying for presents, presents, more presents, and a birthday celebration that doesn't feels so forced, I'm pretty SOL.

Having your birthday on Mother's day when you happen to be a mother doesn't equate to getting double the presents — it just means getting one present and having it count twice. Obviously, motherhood is its own gift, but ever since I was a little girl, my family has celebrated birthdays in an epic way. It's not so much about presents or gifts, but about simply making someone feel special for just one day out of the year. I hear people, especially women, talk about how much they don't want to make a big deal out of their birthdays, as if growing older was somehow a failure, but I still look for every excuse to celebrate. I've tried hard to make birthdays a big deal in our house, from surprising my kids with balloon-decorated doors to letting them choose special activities to do on their big days. Birthdays aren't about material stuff, but just about making someone feel special, and that's the tradition I want to pass down to my kids. But since my birthday just happens to fall on Mother's Day every few years, that "tradition" tends to get a little lost.

My mom fondly tells the story of bringing me home on Mother's Day nearly three decades ago, and when I first heard her talk about my big homecoming I had visions of her gently swaddling me up in a soft baby blanket and gazing lovingly at my face. What a perfect Mother's Day present I must have been, I thought to myself. But now that I am a mother, I know the truth.

Having a birthday on Mother's Day definitely shifts the focus from a day of celebration to a day that feels more like obligation.

As great as I probably was as a baby (and I was pretty great, let me assure you), all my mom probably really wanted for Mother's Day was a freaking nap. That wasn't in the cards for her, and more importantly, her first Mother's Day set the precedent for my entire life, as I go through the motions of a Mother's Day birthday every few years or so. And this year's lack of celebration feels especially poignant. I'm my 20s behind forever come May 8.

Every time my birthday has fallen on Mother's Day, the day hasn't been all it's cracked up to be. Like my 22 birthday, when I was pregnant with my first daughter and my mom's dog got ran over in her driveway and she called me in hysterics from work. I spent my big day bending over my big belly scrubbing blood out of pavement.

Having a birthday on Mother's Day definitely shifts the focus from a day of celebration to a day that feels more like obligation. Especially because I also feel obligated to pay dues to my own mother and my mother-in-law. Even though they both protest what, to them, feels like a silly holiday, I still want to make them feel special. All in all, it feels like one big vicious circle of us all just wanting to be left alone. And let's not even talk about feeling stressed over the fact that everyone trying to make it a "special" day. Ugh.

This year, I've already warned my husband plenty that he had better make this year epic, even though I'm totally joking. He knows birthdays are important to me, even though he didn't grow up with the same kind of birthday traditions I did. But frankly, we've both kind of been struggling with turning 30 this year (his birthday was last week), and it truly feels like we're both facing a wake-up call this year. We started our family young, getting pregnant during our senior year of college at 21, and have had four kids by the age of 28. We're just now waking up after the most restless hibernation of all time, blinking our eyes a bit and wondering, what comes next? And to be honest, I'm all that excited to turn 30. I'm actually kind of scared by the fact that my life is flying by so fast. I had a mild panic attack last night because my oldest daughter is turning 8 this year, so that means, in two more years, she'll be 10, and then for as long as we've had her already, she'll be gone. Poof. It's over, just like that.

That's all I want this year. A break from the fact that my life and motherhood are both moving faster than I ever thought possible.

Even though everyone says parenting goes by so fast, looking at it all straight in face on the edge of 30 feels scary as hell.

In all seriousness, I really don't care that much about Mother's Day or my birthday. Breakfast in bed kind of sounds like a nightmare to me, because a) I look like serious death in the morning, b) I tend to sleep in not a lot of clothing, which may not make for very cute images for my children, and c) I always have to use the bathroom first thing in the morning, and I can't imagine trying to gulp down some burned toast when all I really want to do is poop in peace. Sorry, but that's the truth.

More important than any pressure-filled motherhood holiday or even an excuse to eat cake is the opportunity to take some time to pause and reflect and make sure that we are living a purposeful life. Birthdays, and especially this birthday, offer me a chance to really look my life smack dab in the face and say, Look, you're getting old AF and you'd better be OK with it. Do you need to change anything or are you cool?

So, really, that's all I want this year. A break from the fact that my life and motherhood are both moving faster than I ever thought possible.

I'll take any chance I can to get a "break," even if it is a contrived Hallmark holiday. My ideal Mother's Day gift would be getting pedicures with my girls and for my birthday, I actually only asked for one thing this year, which is pathetic and embarrassing, but I'll still tell you what it is anyways: I really want one of those veggie spiralizer things, so I can make zucchini noodles and pretend to be one of those super healthy eaters. But as long as I get some time with my kids and that veggie spiralizer, I'll be counting myself as a very lucky mama indeed.