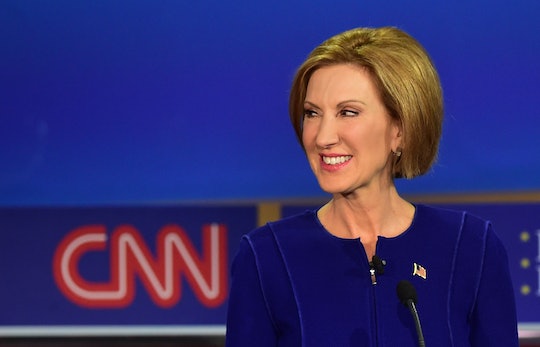 I'm Voting For Carly Fiorina, & This Is Why

Among my peers, I stick out like a sore thumb. I guess I'm not your typical almost-30-year-old voter. There's no doubt in my mind I'm pro-woman in my political stance. I believe in protecting women, helping them rise, and providing them with opportunities equal to their male counterparts. But I don't have a Hillary sticker on my car or a "Tag Team Back Again" tee hanging in my closet. That's because for the 2016 election I'm voting for Carly Fiorina.

Why? Because I see Carly Fiorina as the leader America needs. I believe she can take us in the right direction, and after a rocky past few years, we need a leader who is motivated to steadily redirect us all. We're never going to have the opportunity to have a candidate who represents our personal beliefs through and through, but they can come close, and they can represent the whole of America well without catering to non-essential arguments. You may not agree with Carly's politics 100 percent, and honestly, I don't either. That's not what politics is about. But when I think about the future I want for my children, myself, and for women everywhere, I think Carly.

In 2016, I hope we can elect a woman into office. And I hope that woman is Carly. She's a candidate with a level head and a citizen's background who, I believe, would take us in the right direction. She has what it takes, and she's not afraid to say it.

Here are just a few reasons why I'm rooting for Carly.

Carly Understands The Purpose Of Politics

Visit her website. Her intro alone blows me away. Carly says,

Our founders never intended for us to have a professional political class. They believed that citizens and leaders needed to step forward. If you believe that it's time for citizens to stand up to the political class and say enough, then join us.

I want someone in office who has a perspective outside of politics; they're going to identify with my family and our needs more than a career politician.

Her Hewlett-Packard record isn't impeccable, but do you really know a Chief Executive who's never made a mistake? Didn't think so. Carly acknowledges her errors while recognizing that she had a tough job, especially because she's a woman. In the end, she learned and succeeded through her experience.

In a recent video, she gave a compelling speech about leadership. She told supporters:

Leadership is the same no matter what the context is.

No matter your politics, that's something we can all agree on. A good leader should be a good leader, no matter if it's in a role like Leader Of The Free World or managing your local convenience store. It matters.

Want to argue women's healthcare with someone who has been in the trenches? Ask Carly. She has been there and done that.

For one, she understands preexisting conditions due to her cancer experience. That's a big deal. Carly has concern and empathy for Americans who are suffering ... and there are many. I can only imagine that she'll strive to care for those in need with affordable and realistic healthcare.

Secondly, she's a woman. Her concerns are similar to mine. Men can sympathize with the health worries women have, but they'll never truly understand what it's like to seek out healthcare on behalf of a family.

I've started writing about my personal money philosophy lately and it all comes down to one thing: zero-based budgeting. Don't spend what you don't have. Just don't. I've learned that you're responsible for your future, not the government. You aren't entitled to daily Starbucks stops if you can't afford them when you're also straddled with monthly car payment debt.

I personally believe that if I'm going to hold myself to a higher level of financial responsibility, I'm going to do the same for my government. You know, the one I faithfully pay taxes to.

You Can't Push Her Around

A president with humor doesn't get my vote, but you know what will? Someone who is level-headed, who can tolerate immature banter, and most of all, who can represent their opinion without degrading others.

It's called respect. Over and over, Carly has taken negative, spiteful comments from other candidates and commentators and re-focused on the issues. She gets my vote because she wades through the minutia and calls attention to priorities rather than emotional fodder.

I'll never say Planned Parenthood doesn't do good things for women, because they do. In fact, I've benefited from their services. But I can be for PP and against abortion, and Carly has been clear on her Planned Parenthood stance from the get-go. Her ideals align with mine.

Carly's career path moved her from secretary to CEO to non-profit management, and now, politics. She knows the climate women face in the workforce and has made it known that she's working on our behalf for equal pay and more. Placing a woman in office who will pave the way for both mine and my daughter's careers is priceless.

Want a straight answer? Without political jargon? Ask Carly. Watch any debate or interview she has been involved in. This woman has gumption and isn't afraid to firmly state her opinion and course of action. It's interesting to see Carly go up against Trump because she sticks to facts without sarcasm. Does sarcasm really belong in office? No, it belongs on a talkshow.

Trump and Fiorina align on many staple Republican issues. But Trump is going about it all wrong — using bully tactics and crude comments. Carly represents truth and integrity.

When I look at the GOP line up, I see promise. But when it comes down to number one, it's Carly. When I hear her speak, I hear a president; a leader who will provide a framework of safety and success for my children as they grow up. Count me in for Carly. The U.S. needs a woman of her caliber, conviction, and experience. She has what it takes to spearhead a bright future for us all.