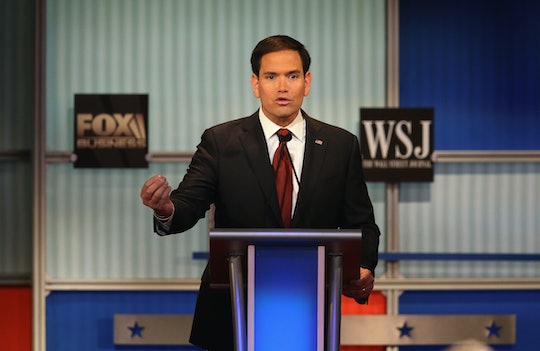 Twelve months. That's how long we have left before Americans will cast their ballots for the 45 President of the United States. November 2016 may seem far off, but for political junkies like me, it's practically around the corner —and we're waist-deep in campaign rhetoric and races. Right now, more than a dozen Republican candidates are entrenched in a political dogfight to become their party's nominee. Businessman and media mogul Donald Trump has (somewhat surprisingly) held the lead in national polling for months, with retired neurosurgeon Dr. Ben Carson nipping at his heels in recent weeks. But it's the candidate steadily gaining on Trump and Carson who should earn the Republican presidential nomination: Florida senator Marco Rubio. He's been endorsed by Utah Congresswoman and rising GOP star Mia Love, the latest in a string of notable endorsements and highly-sought donor pledges.

I attended the FOX Business Network/Wall Street Journal Republican Debate in Milwaukee, WI. During commercial breaks, the candidates milled around the stage, and Rubio was one of the most interesting to watch during those breaks from the action. He went into the crowd to shake hands, joked with other candidates, and appeared to be completely in his element. As one break was ending, he approached a headset-wearing stagehand and patted him on the back with a smile — a seemingly inconsequential gesture that speaks volumes: here is a man running for president who still visibly appreciates and values the hard-working people who make America what it is.

So why do I believe Rubio should get the nod?

Since the horrific attacks in Paris carried out by terrorists on November 13, Rubio's voice has risen above the rest of a crowded field. Rubio serves on the Senate Foreign Relations Committee and it shows; his ability to speak competently and confidently about geopolitical forces and factions is befitting of a future Commander in Chief. His staunch positions that the world is a safer place when America is the strongest military force in the world, and that the federal government's primary role is to provide for the safety of its citizens inspire confidence in his ability to lead both.

I was a teenager when the world changed on 9/11, and I remember so clearly watching President George W. Bush on TV, standing in the rubble of the fallen Twin Towers, bullhorn in hand, vowing justice and protection for the American people. Since then, fighting terrorism has become a defining issue of the modern era, and I want a president who both recognizes threats at home and abroad, and proclaims American strength to the rest of the world. The Commander in Chief should be America's strongest ally, and I think Sen. Rubio's approach to foreign policy positions him as ready and able to fill that role.

I hated studying economics in high school. Back then, I didn't care much about the fluctuations of the U.S. dollar or the nuances of the private and public sectors. But now that I'm an adult with a mortgage, student loans, and endless shopping to do for our family of five, the importance of economics is clear: when the free market is allowed to work, the economy — and the American family — flourishes. Entrepreneurs start businesses, hire employees, and impact their communities. Americans who work hard to provide for their families are the epitome of the American Dream — and these are the values and the people Rubio champions. For example, his $2,500 per child tax credit proposal (at the center of a fiery exchange with Sen. Rand Paul at the GOP debate in Milwaukee) aims to put more money in the pockets of American families and allow them to best determine how to improve their own situations.

On a broader scale, Rubio favors cutting taxes to 25 percent for all businesses and reducing personal income tax brackets from seven categories to three. The benefit is simple: allowing wage earners keep more of their own money benefits all players in the American marketplace. More jobs are created, more money flows through the marketplace, and more Americans are able to thrive.

Rubio also proposes repealing and replacing Obamacare, which would cut a significant amount of government spending.

This year, I have a first grader attending public school — and it's a far cry from the one I attended some 25 years ago. She has daily required reading homework, brings home pages of math story problems, and has so much academic work to complete during the school day that her class gets just 15 minutes to eat lunch. The reason? The school is struggling to meet heightened performance standards in order to continue receiving federal funding.

This kind of federal influence in local schools is a deeply concerning, growing problem. With so much academic instruction dictated by achievement standards (most often unmet), schools have become less learning institutions and more performance-based pressure cookers. Standards set by the federal government — and tied to school funding — is a misguided and damaging approach to education. Rubio promises to stop implementation of Common Core on his first day in office, and has been critical of the continuation of the Department of Education — an opinion held by Ronald Reagan and a myriad of other Republican leaders over the past 30 years. States and local school boards ought to hold the majority influence in neighborhood schools, and Rubio shares this assertion.

Additionally, his plan for promoting vocational education and reducing the reliance on expensive four-year college degrees in the workplace are a breath of fresh air.

You read right: immigration. The most frequently-leveled criticism Rubio faces relates to the Congressional immigration reform he authored in 2013. In part, the bill would have allowed a pathway to citizenship for some of the estimated 12-million immigrants in the country illegally — a stance detested by the far right of the Republican Party. The bill ultimately died, but immigration reform remains at the forefront of the race for the White House.

Today, Rubio proposes a three-pronged approach to immigration reform in lieu of sweeping legislation: 1) Secure the border and start enforcing the immigration laws already in place; 2) Modernize immigration laws towards a merit-based system of entry; and 3) Fine those in the country illegally, deport known criminals, and require all immigrants to obtain work permits and/or visas that they must hold for at least 10 years before becoming eligible to apply for permanent residency.

While some Republicans maintain Rubio's more moderate leanings on immigration ought to disqualify him as the party's nominee, I think it could actually work to his favor. The Republican party is splintered — Tea Party conservatives vs. the establishment of the good ol' boys — and Rubio's diverse appeal positions him as a candidate capable of bridging the party's disconcerting gap. His plan seems more feasible than Trump's call to immediately deport 12-million people, but it's a far cry from blanket amnesty favored by the Democrats. It's a position that could serve Rubio well in inspiring compromise and capturing the all-important independent vote.

A few weeks ago, my brother and I went to a Rubio campaign rally in Wisconsin. As we talked with other attendees before the event, I was struck by the diversity of the crowd. We chatted with an off-duty police officer, a 20-something Apple employee, and a woman who laughed that she was "old enough to be Marco's grandmother." A teenaged volunteer named Alec wore an American flag lapel pin and a contagious smile as he handed out campaign signs. It was a motley crew in a room buzzing with energy that was matched by Rubio as he climbed onto the stage a few minutes later, coaxing his wife Jeanette to join him for a moment. "It's not that she doesn't want to be here," he smiled as she descended the stairs with a sheepish smile. "We're waiting for a phone call from one of the kids and she doesn't want to miss it."

Conventional wisdom would probably not identify this 44-year-old son of Cuban immigrants, the father of four children, as the most likely face of the Republican Party, but he embodies a generational shift the GOP would do well to embrace. In an election cycle where an "outsider" candidate like Donald Trump is leading in polls, it's clear there's a decent amount of frustration among voters. Rubio's youth and positivity breathes new life into a party perpetually lacking precisely that. He's articulate, likable, and refreshingly normal. Ultimately, I think his vision and allegiance to preserving and expanding the American Dream make him a political figure with the potential to become one of the country's most dynamic presidents. And he's got my vote.

More Like This
Bindi Irwin Says Her Daughter Is Totally Captivated By Old 'Crocodile Hunter' Videos
Parents Who Ran Marathon With 6-Year-Old Share Statement After CPS Visit
Post Malone Revealed "The Most Important" Quality He Wants To Bring As A Father
What Is Monkeypox & Should You Be Worried? Here’s What You Need To Know